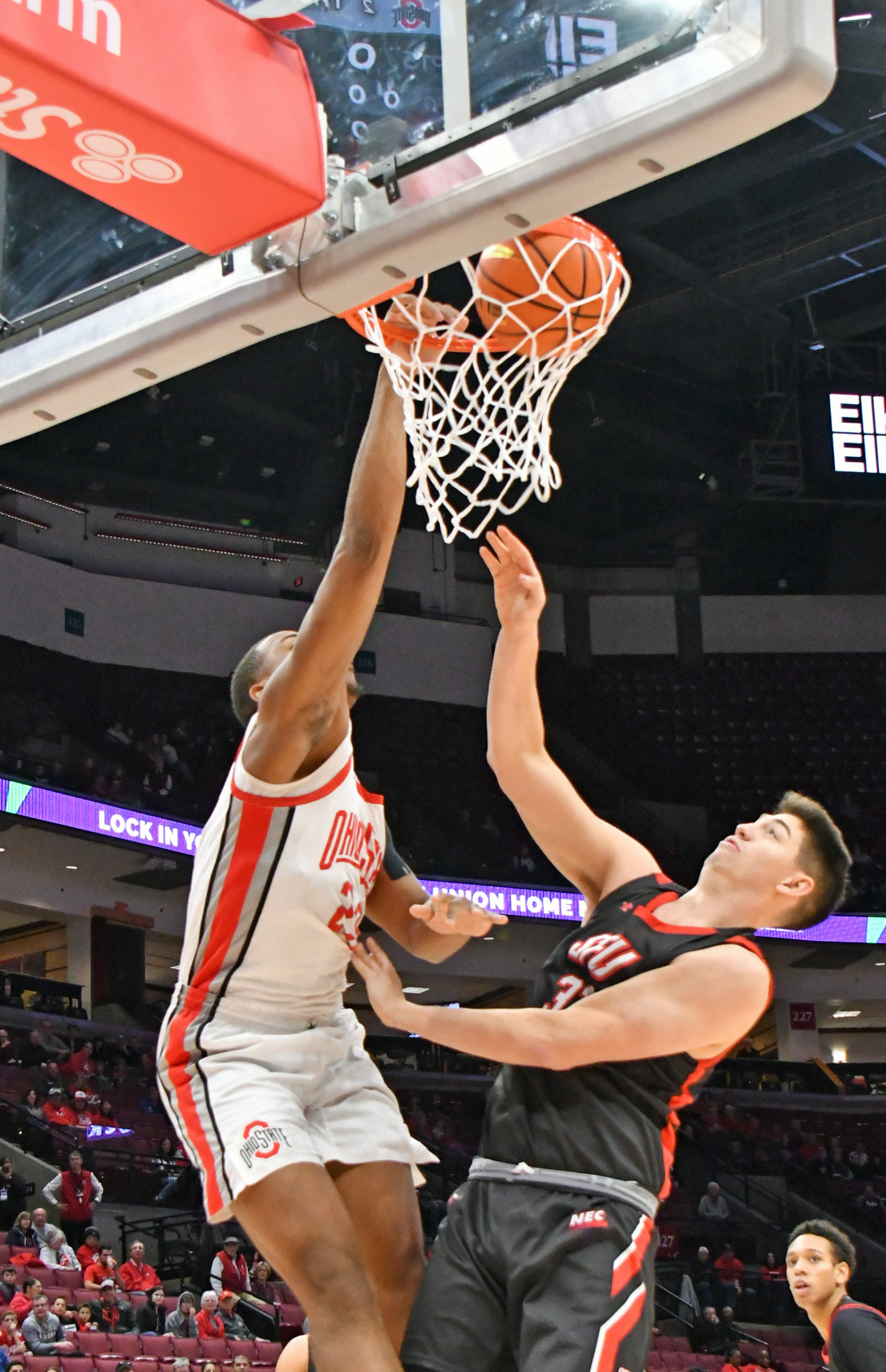 No. 25 Ohio State’s offense dazzled, shooting 50.7 percent from the field and 56.5 percent from three-point range, as the Buckeyes cruised to a 96-59 win over St. Francis (Pa.) at Value City Arena on Saturday.

Both Ohio State and SFU rolled offensively during the first half, as the Buckeyes connected on 51.6 percent of field goal attempts while the Red Flash registered 55.2 percent shooting in the frame. OSU showcased offensive balance as six different Buckeyes reached five or more points during the opening frame, with freshman guard Bruce Thornton leading the pack with 10 points on 2 of 2 shooting from three-point range. Ohio State also assisted on 11 of its 16 made buckets during the game’s first 20 minutes.

While the Buckeyes’ first-half offense was defined by its ability to spread the scoring wealth, the Red Flash relied on a pair of bucket-getters to keep pace with Ohio State. Forward Josh Cohen and guard Maxwell Land each scored 12 points, accounting for 2/3 of the Red Flash’s 36 first-half points.

St. Francis was first on the board in the second half, thanks to a putback tip-in by Cohen, but a pair of mid-range jumpers from Sean McNeil and a three from Thornton pushed Ohio State’s lead back up to double-digits, 51-38, with 17:41 to go in regulation. After SFU cut the deficit to 53-43, OSU forward Zed Key finished back-to-back second-chance opportunities to push Ohio State back up 14 with 14:30 to play.

After a relatively quiet first half, Key delivered in the second stage. The Bay Shore, N.Y., native registered 8 of his 11 points in the second half, pacing the Ohio State offense through the game’s final 20 minutes and leading a stretch of eight-straight points — which sparked the Buckeyes’ second-half scoring outburst. He also gave the Buckeyes a lift on the glass with five rebounds, three of which came on the offensive glass.

Key’s efforts helped the Buckeyes put away the Red Flash for good, as OSU outscored St. Francis 52-23 in the second half, sparked by Key’s eight points, to pull away with the win. Ohio State benefitted greatly from a 27-5 run that spanned 8:45 during the middle stages of the second half.

Thornton remained a steady offensive hand for the Buckeyes all afternoon, finishing with 13 points on 3 of 5 shooting from three. Forward Brice Sensabaugh led the Buckeyes’ scoring efforts, dropping a team-high 15 points while connecting on 3 of 6 three-point attempts. Freshman guard Roddy Gayle Jr. also added a career-high 12 points, while draining a pair of three-pointers.

Center Felix Okpara also registered the first double-double of his career, producing 10 points and 12 rebounds while turning away two shot attempts by the Red Flash.

Although the St. Francis offense ground to a halt in the second half, shooting just 26.7 percent from the field, the Red Flash still registered a trio of double-digit scorers. Cohen led the way with 18 points while Land added 14 and guard Cam Gregory produced 15.