No. 2-Seeded Ohio State Falls 75-72 To No. 15-Seeded Oral Roberts In Overtime In 1st Round Of NCAA Tournament 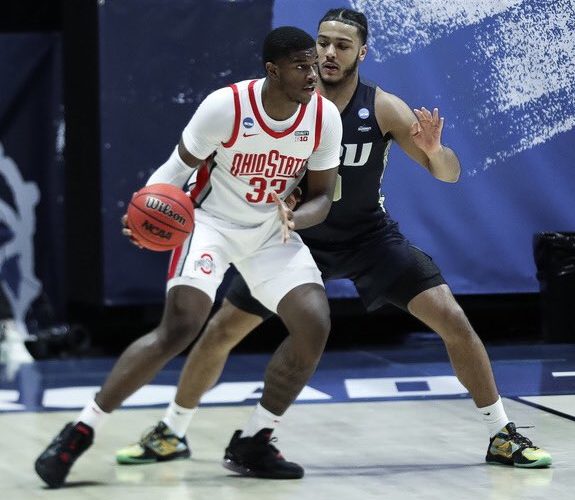 The No. 2-seeded Ohio State men’s basketball team falls 75-72 to No. 15-seeded Oral Roberts in the first round of the NCAA Tournament at Mackey Arena in West Lafayette, Ind., on March 19.

“I want to first begin by giving Oral Roberts credit. They really played well, as we expected they would,” Ohio State head coach Chris Holtmann said. “Their two players, who obviously concerned us, were terrific.”

Despite coming up short, sophomore forward E.J. Liddell stood out for the Buckeyes with 23 points, 14 rebounds, and five assists on 10-of-15 shooting. Junior guard Duane Washington added 18 points and 10 boards on 7-of-21 shooting in the three-point loss.

Oral Roberts opened overtime with five straight points by junior forward Kevin Obanor, with a converted and-one putting his team up 69-64 with 3:26 to play.

Ohio State responded with a strong finish by Liddell inside to cut the deficit to 69-66 with 3:15 left, but sophomore guard Max Abmas rose to the occasion.

After splitting a pair of foul shots with 2:54 left, Abmas hit a stepback jumper to push the lead to 72-66 with 2:10 left following a Liddell turnover.

Washington missed a three, and Liddell grabbed the offensive rebound with 1:49 left, but sophomore guard Carlos Jürgens stripped it away from him.

Washington forced Obanor into a traveling turnover with 1:23 left, and 14 seconds later he converted an old-fashioned three-point play to cut the deficit to 72-69 with 1:09 to play.

Washington stayed on the attack, drawing a foul with 37 seconds left, but he missed both free throws.

With 31 seconds left, Ohio State fouled sophomore wing Kareem Thompson, but he missed the front end of the one-and-one.

Taking the ball coast to coast, Washington missed a tough layup with 24 seconds left, and Ohio State fouled Thompson, who split the pair to make it 73-69 with 22 ticks left.

Liddell drilled a clutch triple with 16 seconds left to cut it to 73-72 on a find by fifth-year senior guard C.J. Walker.

Obanor knocked down a pair of foul shots to push the lead to 75-72 with 14 seconds left.

On their final possessions, junior wing Justin Ahrens missed a contested three-pointer for the Buckeyes, and graduate forward Seth Towns kicked the ball out to Washington on an offensive rebound. However, Washington missed an open look from deep with one second left, and Ohio State dropped a heartbreaker in overtime.

“They made some big-time plays in the second half and overtime, and we didn’t,” Walker said. “We didn’t take advantage of turnovers and missed shots in transition, things that we usually take advantage of. It hurts.”

Despite outshooting Oral Roberts from the field 43.3 percent-35.7 percent, Ohio State’s turnovers and struggles from the foul line and three-point range were too much to overcome.

“It’s most definitely mental over physical. We just took it for granted thinking we could come in and win the game, and in March, you can’t do that,” Walker said. “Oral Roberts just took advantage of that, and they made the right plays at the right time.”

“We had a few carless ones, but give them credit for their activity too,” Holtmann said of the turnovers. “We had a few careless ones in the first half, and they dug down and got a few turnovers off of some post ups.”

Oral Roberts roared to a 7-0 start capped by a three-pointer by Abmas from near midcourt just 1:34 into the game.

“The vibe was really good; the preparation was really good. We just had too many missed opportunities, too many turnovers, too many empty possessions on offense,” Holtmann said. “I did not think we had a great start. That’s my fault. They were as ready as they had been all season.”

Ohio State rallied back on a 10-0 run to take a 10-7 lead 3:33 into the contest, with eight points from Washington and a rebound putback by Liddell.

The Buckeyes battled back and forth with the Golden Eagles after surviving the opening surge, taking a 23-15 lead on two Walker fouls shots to end an 8-3 stretch with 9:17 until halftime.

Oral Roberts answered with a 19-4 run across 6:12 to take a 34-27 lead with 3:05 until halftime. The Golden Eagles’ two leading scorers, Abmas and Obanor scored nine and 10 points, respectively, during the stretch.

Ohio State ended the half with a 6-2 spurt on a two-handed slam by junior wing Justice Sueing and two buckets in the lane by Liddell to cut the deficit to 36-33 entering the midway intermission.

The Buckeyes (41.9 percent) outshot the Golden Eagles (38.9 percent) from the floor in the first half, but the three-point shooting from the Eagles helped guide them to a three-point halftime lead. Oral Roberts shot 41.2 percent (7 of 17) from deep, while Ohio State shot 25.0 percent (3 of 12) across the contest’s first 20 minutes.

Liddell gave the Buckeyes a 37-36 lead on a strong move following a shot clock just 1:45 into the second half, but Obanor answered with a pair of three-pointers to give Oral Roberts a 42-37 lead 2:40 into the frame.

Ahrens tied the game at 42 by using a shot fake and drilling a tough three-pointer 3:32 into the second frame. The Golden Eagles responded with a 7-0 spurt aided by multiple Buckeye turnovers to take a 49-42 lead with 12:44 left.

Walker helped weather the run, converting an old-fashioned three-point play to spark a 9-1 run with 11:50 left for the Buckeyes. Liddell capped the stretch with an and-one layup of his own to make it 51-50 with 8:35 on the clock.

With Ohio State trailing 56-54, junior wing Musa Jallow committed a turnover, but 10 seconds later he blocked Abmas with 5:59 left. The block led to a Walker layup, tying the game at 56 with 5:51 to play.

Liddell and Walker gave the Buckeyes a 60-58 lead with 4:41 to play on back-to-back buckets with a powerful block by Sueing on Abmas in between.

Abmas tied the game back up at 60 with a burst into the lane for a basket with 4:28 left, and Jallow broke the tie for Ohio State by splitting a pair of foul shots with 4:03 on the clock.

Washington committed a turnover with 1:50 to play, but Liddell had his back, chasing down Abmas and swatting away his layup attempt four seconds later.

Obanor knocked down a pair of foul shots for Oral Roberts to cut the deficit to 64-62 with 1:07 left. Liddell grabbed a clutch offensive rebound with 39 seconds left, but he missed the front end of the one-and-one free throws to give the Golden Eagles life.

Jallow fouled Obanor with 14 seconds left, and the sharpshooting forward knocked down both free throws to tie the game at 64 before Washington missed a stepback jumper with the game clock winding down in regulation.

“We were just trying to get in space and get downhill,” Holtmann said of the final play in regulation. “We were supposed to get in space, get him to his left hand off a ghost action.”

Obanor (30) and Abmas (29) led the way for the Golden Eagles, combining for 59 of their 75 points. Walker added 12 points and six boards for the Buckeyes.

“He’s a really great player. He’s the No. 1 scorer in the country for a reason. He just displayed that tonight, made a lot of tough shots, made a lot of big-time baskets, Walker said of Abmas. “We made it as hard as possible, he just made shots. That’s obviously what he’s done all season, and you’ve just got to tip off your hat to him. He’s a really good player, and he just had a really good night for him and his team.”