Jack Neely Is Throwing Gas, Heating Up For Buckeyes 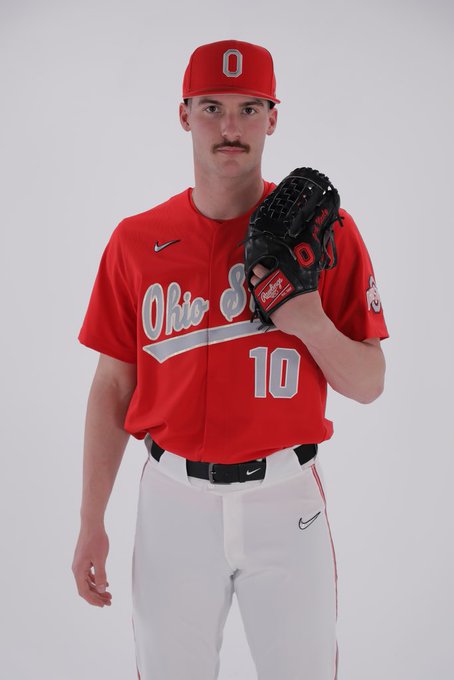 Ohio State entered the season without a clear answer in its No. 4 starter spot. The Buckeyes had established names in Garrett Burhenn and Seth Lonsway at the top of the list and a consistent pick in Griffan Smith at No. 3, but a battle between Will Pfennig and Jack Neely boiled through the offseason and into the final week before the beginning of the season. The two are very different players, with Pfennig working primarily as a corners-painter while Neely prefers to overpower batters, but both appealed to head coach Greg Beals as a potential ace to round out the starting rotation.

“They have good stuff and they compete really well, but they’re very different,” Beals said of Pfennig and Neely. “Jack is 6-8 and a hard thrower and Will’s 6-0, maybe, and really commands the baseball. Very different pitchers, but very good in their own right. I think the critical thing in what those guys have done is that they know who they are. They learned their stuff and they learned how to pitch with it.”

Ultimately, in Ohio State’s first series of the season, the Buckeyes deployed not one, but both pitchers intertwined in the preseason competition. As Beals explained to BSB in a phone interview on March 17, a preseason injury to Smith’s arm has slowed his debut in the starting lineup this season, as Ohio State doesn’t want to aggravate anything unnecessarily. He mentioned that Smith could make an appearance in the starting lineup later in the season, but for now, he’s serving primarily as a lightly used relief pitcher.

“Griffin had a minor setback and we were protecting him. (He had something) with his arm, we slowed him down a little bit in the preseason to make sure he’s healthy for the whole season. He got on the mound this weekend and he’ll get on the mound for a little bit more of this coming weekend,” Beals said prior to Ohio State’s series with Rutgers. “We hope to continue to grow him throughout the season.

“He’s very capable of (starting) but it’s hard to say what what’s going to happen,” Beals said. “We’re going to send guys out to pitch and see how it evolves, but that possibility certainly exists.”

Until Smith is fully healthy – or healthy enough for Ohio State to feel comfortable with an increased workload, Pfennig and Neely will continue to hold down the fort for the Buckeyes in the back half of their starting rotation. Early in the season, that hasn’t presented much of a problem for Ohio State. It’s a role that both players seem to be comfortable in, specifically Neely, who seems to thrive in longer appearances.

“Yes, I’m much more comfortable starting,” Neely said when asked by BSB about his preferred role in the staff. “You know, I’ve always enjoyed the process of going multiple innings to give the team a shot to win, to try to pitch well enough to give our hitters a chance to be able to win a game for us. I like to compete and keep that focus.”

A transfer from Texas making his debut from the Buckeyes this season, Neely has caught the attention of scouts and onlookers not just with his statistics, but with how he’s accumulated them. He’s by far the hardest throwing pitcher on the Ohio state roster, checking in around 97 miles per hour on his fastball – by far his most common pitch – consistently. Although he’s already making a name for himself as a big arm on the mound, Neely’s answer for where his velocity comes from is as good as that of anyone watching him fire away.

“I would say, overall, my ability to overpower batters with my fastball (is my top trait),” Neely told BSB.

“I didn’t used to throw this hard; it was something I really focused on, it’s something that I trained to do. To be honest, I don’t really know how I do it. It just kind of happened and I’m very glad that it happened. Sometimes it even kind of surprises me, because I go out there and I’m not really thinking about trying to hit those numbers but it happens and let me tell you, I’m very happy that it does.”

Ohio State is very happy with it too and works hard to nurture the kind of physical gifts that a pitcher like Neely brings to the table. The Buckeyes have invested heavily in pitch tracking technology in recent years, keeping an eye on everything from the standard ball and strike counts in bullpen workouts to full ball tracking technology, which Neely says he’s “very much interested in.” From spin rate, to pitch shaping to hand grips, the junior wants all of the information that he can get on his production on the mound – all in the pursuit of developing a better understanding of where that velocity comes from and how to continue increasing in as he progresses under the guidance of director of pitching development Brad Goldberg.

“We use a couple of different tools, two of them being Radsodo and TrackMan,” Neely said. For reference, Radsodo and TrackMan are pitch tracking applications sold primarily to baseball teams, both professional and amateur. “Essentially what they do is, they are tools to measure those metrics. Whether I’m going to (check grips) or even throwing live, we always have those going so we are able to keep up with how things are looking physically.”

That technology and the staff in charge of it, along with the rest of Ohio State’s staff and the culture of the program drew Neely in when he decided to pack up for Columbus. He took a visit to Columbus and confirmed what he had heard about the program during his recruitment, which was enough to convince him that Ohio State was the right spot to finish his college career after a foray into the junior college world following his one year at Texas. He announced his commitment to Ohio State late in 2019.

“I haven’t taken the most typical path here,” Neely said. “When I was looking for a new home, I had a lot of emphasis on the quality of coaching and the quality of player, not just on the fields, but off the field too. And when I came to visit Ohio State, I had already heard great things and it was only backed up by the incredible coaches. I got along with the players really well too.”

Once Neely arrived on campus and officially joined the fold, those players around him became a crucial part of the equation for his development. In an established pitching room like that of Ohio State, Neely has the chance to bounce ideas off his teammates frequently.

Specifically, he’s worked with Lonsway on a common issue in the walks department. Both players have had problems with the free passes in the past and mentioned that as their primary focus for improvement this season, with Neely going to Lonsway specifically to work through the issue.

“Having guys like, Garrett Burhenn, Seth Lonsway, Will Pfennig, Griffan Smith (is great), and the list just goes on,” Neely said. “It’s nice to have the guys around you that you can bounce ideas off. I’m able to better myself watching them and seeing how they compete in the game.

“I want to cut down on walks, the better I am on that, the deeper I can go into games to give our guys a chance to win. So if I can cut that down, it only helps. (Seth and I) have definitely talked about it, I approached him, with him being the caliber of player he is. It’s more a mental thing I would say, at least for me. Seth and I go back and forth on that a lot.”