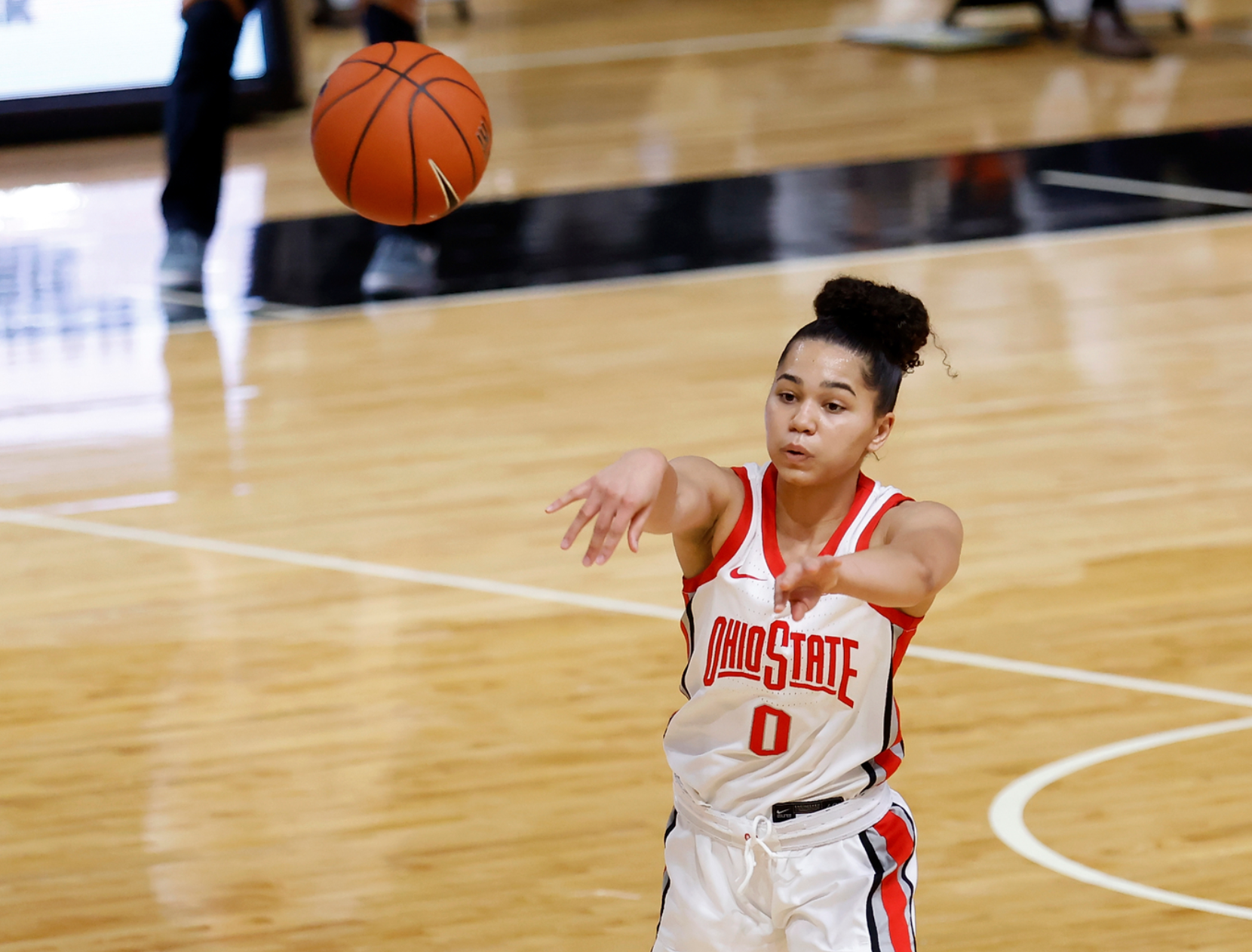 Ohio State women’s basketball had not played a game since Dec. 10 after issues with COVID-19 within the team. Even after the 25-day layoff, the Buckeyes were without three players, leaving just nine to play with against Penn State.

Regardless, without the help of All-Big Ten forward Dorka Juhasz, guard Rikki Harris and forward Rebeka Mikulasikova, Ohio State still came out and won its first Big Ten game of the season, taking down Penn State 82-69 to move to 5-0 on the year.

“I was really proud of our effort. I thought we played really hard,” Ohio State head coach Kevin McGuff said. “Obviously it’s been real choppy here for the last three weeks and we could have used that as an excuse, but our kids came out and I thought they played extremely hard.”

Another hurdle this team had to face in its near four-week gap between games was the result of the Patrick Klein investigation, which included a self-imposed postseason ban for the program this season.

But none of that mattered to open the game, with Ohio State jumping out to a 22-12 lead after the first quarter that ballooned to 31-12 as part of a 15-0 run to end the first frame and start the second.

“I think all of us, it just motivates us a little bit more,” sophomore guard Jacy Sheldon said regarding the postseason ban. “You always want to win, but I think you want to win a little extra when you hear that news, and I think we did that today and I think we’ll continue to play like that throughout Big Ten play for the rest of the season.”

The Buckeyes led 47-31 at half thanks to 16 points by sophomore guard Madison Greene, who was a perfect 6-of-6 shooting from the field in the opening 20 minutes.

Penn State battled back in the third quarter, cutting the margin to seven, 58-51, after a 14-3 run that was led majorly by guard Makenna Marisa, who had 12 points in the frame. But Sheldon hit a pair of threes for Ohio State to push the lead back to double digits.

Again, the Nittany Lions continued to fight, cutting the lead to seven with 7:21 to play in the fourth quarter. But a basket by freshman forward Gabby Hutcherson, and then another make and a pair of free throws by Greene brought the lead back to 13, helping to seal the victory.

“Penn State’s good, and they played really fast and I thought we got a little bit warn down in that stretch and they made us pay,” McGuff said. “They have a good team and they got hot, and so we had to kind of get ourselves back together, but I was really proud of the fact that we stayed together and we continued to fight through it.”

Greene finished with 24 points, 10 rebounds and five assists, while Sheldon ended the game with 21 points, 13 of which came in the second half.

“We were really spaced out and it opened up the lane for me to drive and get to the basket, so it was really on my teammates,” Greene said. “We moved the ball really well and we just got open looks.”

On the double-digit rebounding effort, Greene said she had no idea she finished with that many boards after the game.

“Honestly, I didn’t know I had 10 rebounds,” Greene said. “Usually guards like me and Jacy, we usually go back, but today, I just got in there, tried to box out and apparently I got a lot of rebounds.”

Hutcherson saw the most minutes of her collegiate career thanks to the short bench and foul trouble from junior forward Aaliyah Patty. She finished with seven points and six rebounds in 26 minutes.

On the other end, Marisa was the top player for Penn State, finishing with 21 points and nine rebounds on 9-of-16 shooting.

Hevynne Bristow, a transfer guard from Providence who was expected to redshirt this season, played in her first game of the year after the NCAA changed its rules and allowed for automatic immediate eligibility this season. She did not score, but saw action in the second quarter.

Next up, Ohio State is set to go on the road and take on Illinois on Dec. 7. And while there is no NCAA tournament goals to strive for this season, McGuff said this roster has a different motivation to go out and win each game moving forward.

“It’s tough. That was a real blow to the kids and it’s even tougher given the fact that we’re coming off a season last year where I thought we were playing really well at the end of the year then didn’t get to go to the postseason because of COVID,” McGuff said. “That was certainly difficult, but this team has great competitive character, they really care for each other and I think the biggest thing is that they want to play for each other.”