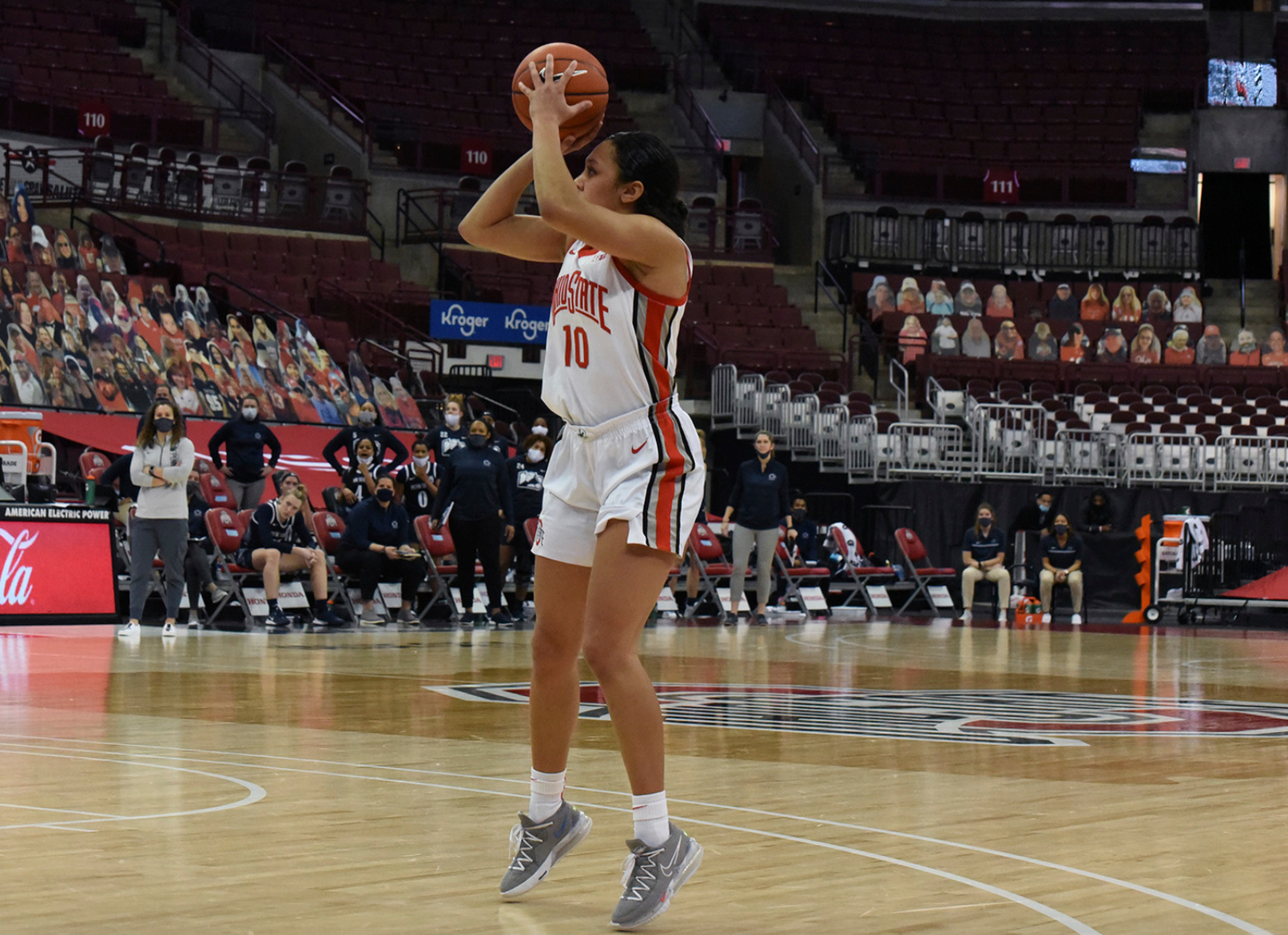 After trailing by 14 in the second half, without its All-Big Ten forward and in an arena that hadn’t seen a loss in multiple seasons, Ohio State women’s basketball pulled through, taking down Iowa 84-82 in overtime.

The win snapped Iowa’s home win streak of 42 games, which was the second longest streak in Division I.

“Just really proud of our kids,” Ohio State head coach Kevin McGuff said. “I mean man, we fought and scratched and clawed and just played so hard in that second half against a great Iowa team, this is a great win and just really happy for our players.”

Three Buckeyes scored 18 points or more, with the trio of guards in Madison Greene (20), Braxtin Miller (18) and Jacy Sheldon (18) leading the way for Ohio State offensively.

After Iowa extended its lead to 14 after a Caitlin Clark basket to open the third quarter, the Buckeyes battled back throughout the second half, and, after a steal by Greene, it was true freshman forward Gabby Hutcherson that buried a three to give Ohio State a 72-71 lead with 1:29 to play.

“That was a huge shot, and she’s been playing really well, and she’s just continuing to get better,” McGuff said of Hutcherson. “She’s working really hard in practice, but a huge moment for her.”

But Iowa guard Kate Martin split her free throws to tie the game at 72, and the Buckeyes had a chance to win in regulation, but Sheldon missed the runner as time expired.

After Miller opened the scoring in overtime for Ohio State, Iowa went on a 6-0 run, including four by forward Monika Czinano, who had struggled all game. Czinano, who averaged 20.2 points per game coming into the contest, fouled out in overtime with nine points.

Once again, the Buckeyes battled back, this time with a 6-0 run of their own, and it was Greene who made a contested layup to give Ohio State an 80-78 lead with 1:58 to play.

Clark hit a pair of free throws to tie the game, but Sheldon came right back with a basket to give Ohio State another two point advantage. Clark, a true freshman who came into the game second in the Big Ten with 25.6 points per game, finished with 27 points, 10 rebounds and five assists.

“She’s really good, I mean she’s a special player and she’s just so dynamic and she can shoot with range,” McGuff said of Clark. “She creates her shot with stepbacks and things like that as well as anybody I’ve seen in a long time, so as good as advertised, maybe even better.”

The first-year Iowa guard missed a three-pointer on the other end and, after the Buckeyes struggled from the free-throw line all game, redshirt freshman guard Rikki Harris hit one of two to put Ohio State up 83-80 with 48.4 to play.

Iowa forward McKenna Warnock hit a tough layup to make it a one-point game, and, after another free-throw miss by Ohio State, this time by Greene, the lead was down to just two points.

But Ohio State shut down Iowa on its final possession, securing a 7-0 record with a final three-point miss by Clark.

“We’re really proud of each other,” Greene said. “We worked hard, and it was a struggle, throughout the whole game we were down, but we kept fighting and we ended up winning, so I’m just proud of the team and we just did what we had to do.”

To open the game, both teams started out red hot from the field, scoring 15 points combined in the first 1:45, Iowa jumped out to a 26-17 lead after the first quarter thanks to 13 points from Clark, who hit five of her six shots in the frame.

Both teams cooled off a bit in the second quarter, but Ohio State really struggled at the end of the first half, hitting just one of its final eight shots in the opening frame, and trailed 44-32 after a buzzer beating tip-in from Martin.

Ohio State was also outrebounded 27-15 in the first half before bouncing back to outrebound Iowa 27-23 the rest of the way. McGuff said that was key in earning the comeback win.

“We were down I think 12 on the boards in the first half, and then we were plus-four in the second, so that was the first thing we talked about,” McGuff said about the halftime adjustments. “We were giving them too many opportunities, they’re too good of an offensive team to give them second-chance points.”

Miller led Ohio State with 11 points at halftime, while Sheldon chipped in nine points and four assists. Both Miller and Sheldon shot 4 of 7 from the field in the opening 20 minutes.

Junior forward Dorka Juhasz was unavailable for the third straight game, but was on the sidelines for the first time since her absence.

Harris and sophomore forward Rebeka Mikulasikova did return after missing the past two games, and the duo combined for seven points and eight rebounds.

While Mikulasikova came in during the first quarter, Harris did not see game action until the second half, but brought in some key rebounds and added a block and steal in pivotal moments during Ohio State’s comeback.

Next up, Ohio State will take on Nebraska, who is currently 6-4 and 4-3 in the Big Ten. That road game for the Buckeyes is set for 4 p.m. Saturday.

With what is now a 7-0 start, and a 3-0 start in the Big Ten, Miller said the players on this team are coming together to show how talented they really can be.

“I think we already know that we’re on a roll and that we are, individually and together, a really good team,” Miller said. “Though it was hard having to fight back and we wouldn’t wish that, being able to come back just gave us a lot of confidence and kind of confirmed to us as well that we can do a lot.”