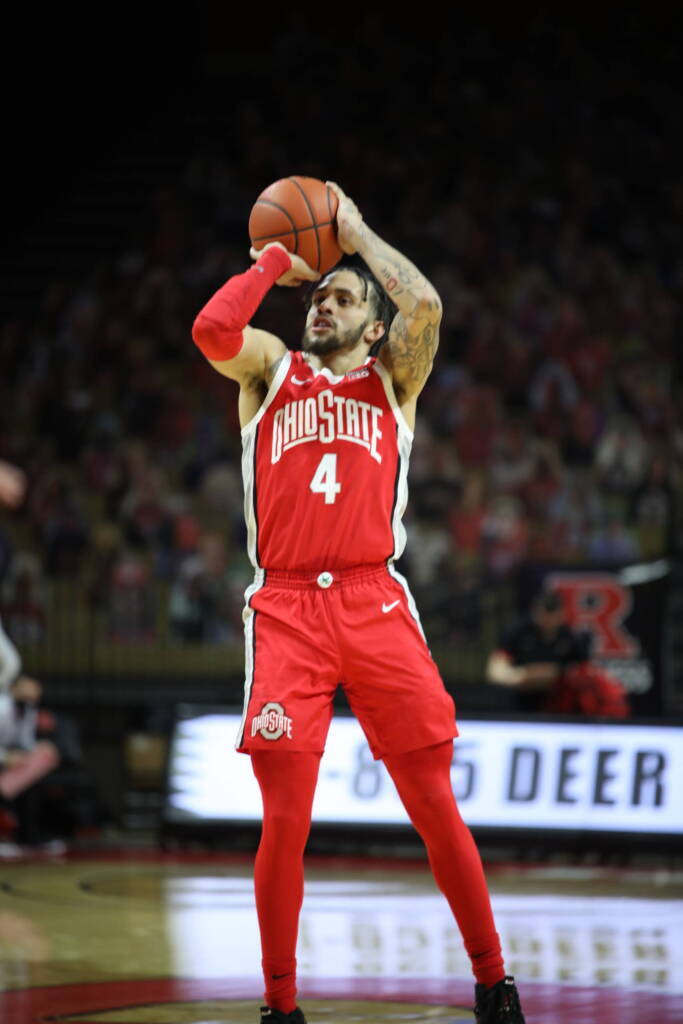 The Buckeyes (10-3, 4-3) beat the Wildcats (6-5, 3-4) with a 12-0 stretch sparked by a three-pointer by junior wing Justin Ahrens, followed by back-to-back finishes through fouls by fourth-year junior wing Justice Sueing and senior forward Kyle Young, and four points from junior wing Duane Washington Jr.

“It was kind of a blast-action play that we ran for Justice to get to his left hand and get downhill, maybe draw a foul or get to the hole and have a layup,” Ahrens said of his final three-pointer. “But they honestly played it pretty well. They knew that he was trying to get to his left hand, so he took a few troubles, made a pivot, kicked me the ball and my defender’s hand was down so I put it up. And honestly didn’t know if it was going in or not, but I was confident, so it went in and I was pretty fired up.”

While the play was called for Sueing, the alignment of the sharpshooting Ahrens on the ball side was not an accident by Holtmann. “That’s why we put Justin on ball side, so that (Sueing) would have potentially some space on the drive there,” Holtmann said of Ahrens. “And the young man hit a really, really big shot, the biggest shot of his career so far.”

Washington led the Buckeyes with a career-high 23 points and dished six assists, and Ahrens added 12 points on four three-pointers in his first start in place of fifth-year senior C.J. Walker and senior Jimmy Sotos.

“I feel like he’s done a really, really good job of seeing the floor, like Justice has been getting better at. I think he had six assists tonight with one turnover, that’s a really good stat to have,” Ahrens said of Washington. “So credit to him for you know handling the ball the way he has been and reading certain situations, and ultimately taking good shots, which he has been doing these past couple games.”

Holtmann, who has been tough on Washington through three years, also loved what he saw from Washington down the stretch. “His decision-making in the last four minutes probably won the game for us,” Holtmann said of Washington.

Sueing stepped up with some minutes at guard because of how shorthanded Ohio State was in the backcourt, scoring 13 points with seven boards. On the interior, Young scored 12 points on 5-of-5 shooting and grabbed nine rebounds, while Liddell went 0 for 6 in a six-point, 10-rebound effort.

The Wildcats rallied on a 14-3 run to cut a 12-point Ohio State lead to one with 4:21 on the clock. An 8-0 streak as part of that run featured back-to-back three-pointers by junior forward Pete Nance and sophomore guard Boo Buie.

“We had to be tough and smart down the stretch; the game was never out of reach,” Holtmann said. “When you’re a college basketball coach you know that thing can go away in a heartbeat. And they made a couple threes – they banked in one and they had one rattle around the rim – they may plays, give them credit. Our guys responded with great poise, down the stretch. It’s why I’m so proud of them.”

Holtmann’s squad weathered the storm of eight straight Wildcat points and answered with an 11-4 stretch to make it 64-52 with 9:32 left, highlighted by back-to-back slams by fourth-year junior wing Musa Jallow and Young.

After the Buckeyes took a 13-point lead, the Wildcats ripped off an 8-0 run aided by two turnovers and capped by consecutive triples from junior guard Miller Kopp to cut the deficit to 53-48 with 13:54 remaining.

Young gave Ohio State its biggest lead of the game when he slammed home an alley-oop lob from Washington to push the edge to 53-40 with 15:07 on the clock.

Northwestern third-year sophomore guard Chase Audige erupted in the first half, scoring 19 of the Wildcats’ first 23 points and reaching a season-high 21 points across the first 20 minutes.

The Buckeyes were more balanced than the Cats but Washington still scored 15 of their first 27 points on his way to a 17-point first frame.

The visitors took a 17-16 lead on a bucket by Audige with 12:22 until halftime, marking the eighth lead change in a back-and-forth battle. Ohio State responded with a 7-0 spurt sparked by a triple by Sueing and a pair of baskets inside by freshman forward Zed Key and Young to take a 23-17 lead and 9:56 until the midway point.

Washington gave the Buckeyes their biggest lead of the first half on one of the most impressive plays of the game. The scoring guard caught the ball at the top of the key and broke Wildcat guard Ryan Greer’s ankles with a crossover on his way to a strong left-handed finish, putting the home team up 38-27 with 2:23 until intermission.

Audige finished with a game-high 25 points for the Wildcats, while Kopp added 16 points and nine boards.  Holtmann came away impressed with his team’s execution down the stretch despite missing their top two point guards.

“Their fiber, their poise, their commitment to playing the right way, and toughness down the stretch – we’re learning about this group as a coaching staff, and they deserve all the credit for that,” Holtmann said.