No. 15 Ohio State Women’s Basketball Drops Third Straight With 87-75 Defeat To No. 11 Indiana 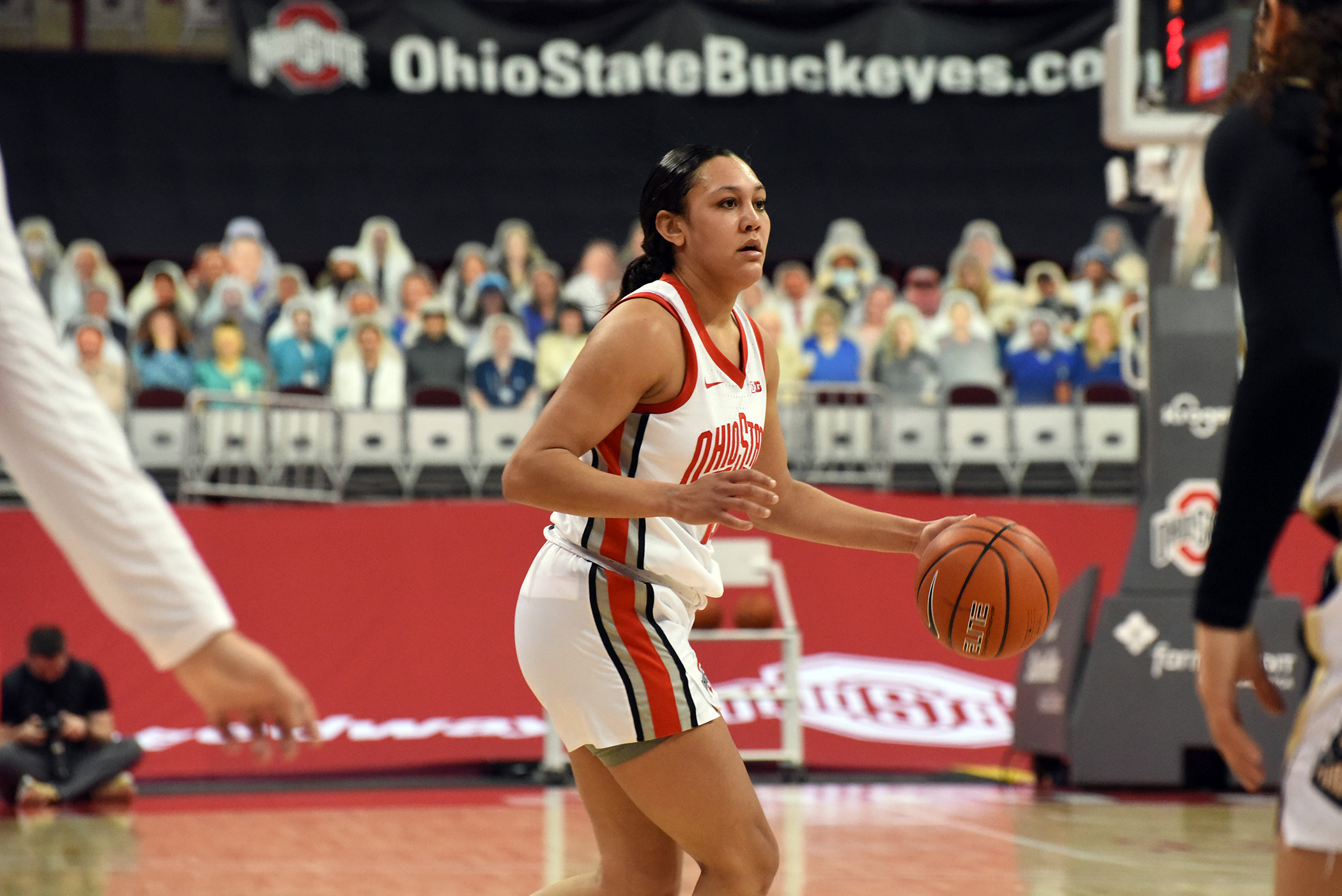 Ohio State women’s basketball, after coming in with a two-game losing streak and losers of three of its last four, seemed destined to snap the streak after taking a lead into the fourth quarter on the back of a 18-6 run.

Instead, Indiana fought back in the fourth and took over late for a 87-75 win that snaps the Buckeyes’ 15-game win streak over the Hoosiers, and gives Ohio State its first home loss of the season.

The start of the fourth quarter had action on both sides of the floor, with Ohio State consistently holding the lead to varying levels. With 5:47 to go in the frame, sophomore guard Jacy Sheldon, Ohio State’s leading scorer on the season, fouled out. She finished with 11 points on 5-of-9 shooting, and added three steals in 23 minutes.

“Jacy’s an incredible player,” senior guard Braxtin Miller said. “She brings so much to the team and to the court while we’re out there, so I think that was definitely something that was hard on us.”

“They made some good plays, maybe we made some bad ones, our defense kind of fell apart a little bit, and we didn’t rebound to the best of our abilities as the stretch went on,” Miller said on the Indiana run.

Indiana’s three leading scorers this season – forward Mackenzie Holmes (17 points) and guards Grace Berger (20) and Ali Patberg (19) – all played a major factor in the Hoosiers’ victory, finishing with 56 of the teams 87 total points.

The Buckeyes were led by Miller and freshman guard Kateri Poole on the day, who finished with 23 and 17 points apiece. Miller also finished five rebounds, six assists, two steals and committed only one turnover after playing all 40 minutes.

“I thought she had an outstanding game,” head coach Kevin McGuff said of Miller. “She was really good, she was efficient, with Jacy in foul trouble and Kateri being young, we put her at the one some, I thought she handled that really well, and overall just a very good performance for her.”

Junior forward Dorka Juhasz also chipped in a double-double with 11 points and 12 rebounds on 5-of-12 shooting.

Miller was the exception to the turnovers, though, with Ohio State committing 20 turnovers in the game, including seven by Poole. The Hoosiers outscored the Buckeyes 21-14 in points off turnovers in the contest.

“They’re good defensively so give them credit, but boy we made some decisions and plays that just did not put us in a very good position,” McGuff said.

Trailing by just three heading into the second half, the Indiana lead went all the way up to 45-38 before the Buckeyes really started to take over. Ohio State scored 18 of the next 24 overall points the rest of the third quarter, including a 9-0 run that spanned 1:32, to take a five-point lead into the fourth.

In the third quarter, the Buckeyes shot 6 of 12 (50.0 percent) and hit all three of their three-point attempts.

“We had a really great third quarter, our defense was good, we rebounded the ball, we took care of the ball,” McGuff said. “Then (in the fourth), we couldn’t get a big stop or rebound and just too many turnovers.”

Early in the game, Ohio State started slow, committing eight turnovers in the first quarter and allowing the Hoosiers to take an 18-12 lead behind a 10-2 run to end the frame. But the Buckeyes eventually picked up the offense in the second quarter and cut the deficit to 39-36 heading into halftime.

The deficit was cut to three points at the end of the second quarter thanks to a pair of Ohio State threes in the final nine seconds, the first from Miller, and the second by Sheldon, which came off a Sheldon steal and was buried from far behind the three-point line.

Sophomore guard Madison Greene missed her fourth straight contest, with Poole once again taking her place in the starting lineup. For the first time since the start of her absence, Greene was with the team both in warmups and on the sidelines during the game.

Next up, Ohio State takes on No. 25 Rutgers on the road at 8 p.m. Friday. This will be the first and only contest between the Buckeyes and Scarlet Knights, and will be the final game of Ohio State’s season with the self-imposed postseason ban in play. The game will be aired on ESPN.