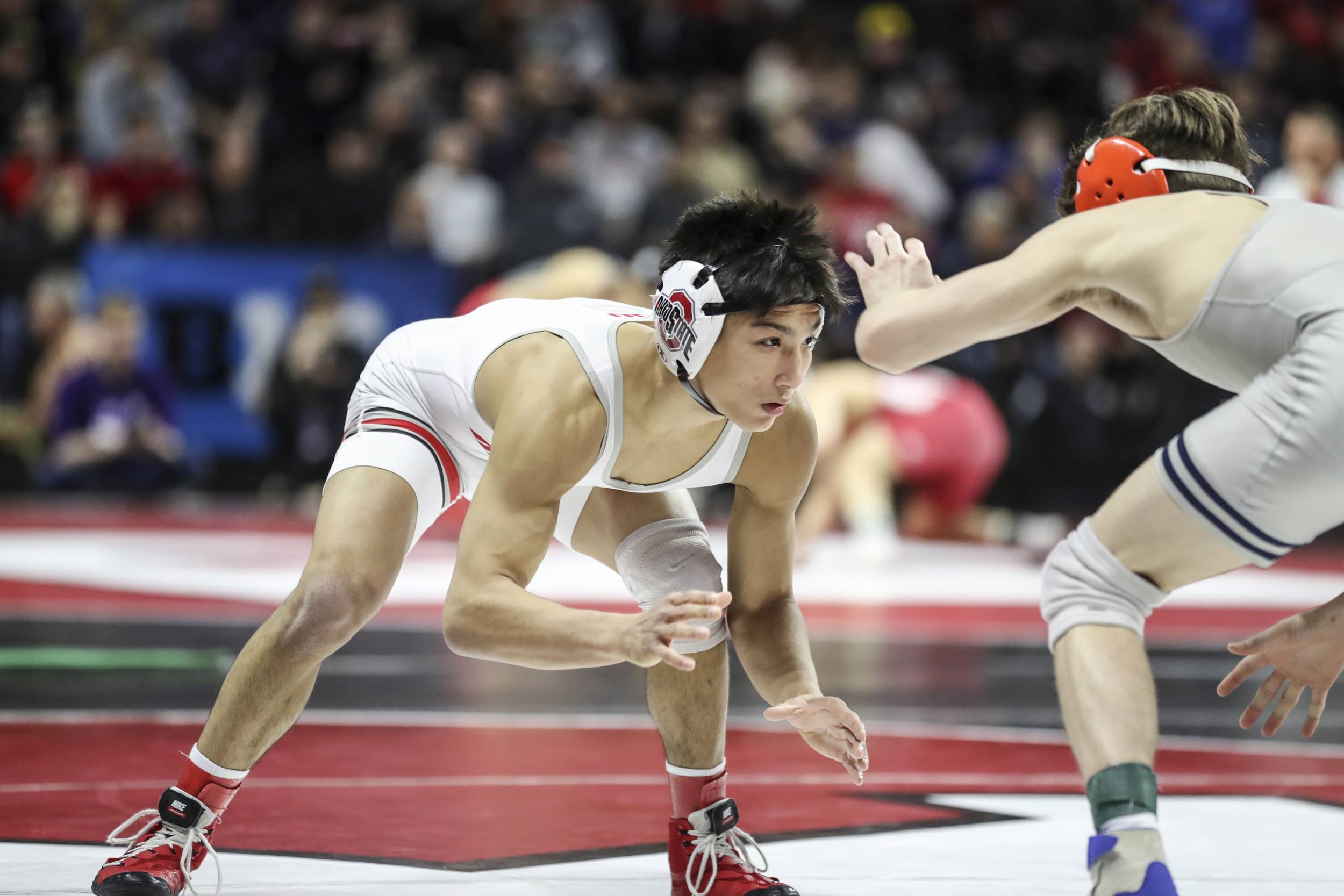 Ohio State’s final song in its pre-match playlist for wrestling matches at the Covelli Center is AC/DC’s Thunderstruck. Last season, in Ohio State’s first year in the new, state-of-the-art facility, that song could consistently and effortlessly bring a sold out arena to its feet, especially ahead of a crucial ranked Big Ten match for the No. 11 Buckeyes, against the No. 17 Rutgers Scarlet Knights in this instance.

In 2021, however? It was met with sparse applause from a smattering of family members in attendance, and followed immediately by an almost macabre call of, “Welcome back, Buckeye Nation!” from the in-house OSU hype man. The Buckeyes were back home, certainly, but the “Buckeye Nation” at large? That one is still a work of progress.

That’s a trait shared by the product that the Buckeyes are putting on the mat. Ryan’s 15th Buckeye squad looked every bit like a team fresh off the strangest offseason of all time in their opening tri-meet of the season, as they dropped a dual to Illinois before bouncing back against Wisconsin in a tremendously sloppy showing that drew Ryan’s ire both immediately after its conclusion and five days later in his weekly media availability.

“We looked a little rusty today,” Ryan said after that opening stanza. “We lost a number of matches late today and that’s a sign of rust and weight cutting. This was the time the guys were down to weight in nine months and we looked sluggish. But I’m proud of the way we came back in the second match. I’m happy for Malik (Heinselman). Rocky (Jordan) also came back really strong. And Sammy (Sasso) wrestled really well today.”

“Sometimes you learn some things when you deal with the pain of losing. Nobody likes to lose. We certainly didn’t go up there wanting to lose. But this shows us where we need to get better. Where we need to improve. We get Rutgers next week and we have to be ready to go.”

The second showing of the season produced a better result for the Buckeyes, as they claimed a 19-14 victory over Rutgers to move to 2-1 on the season, but it was far from the kind of clean performance that Ryan will want to see from his team come Big Ten and NCAA Championship time in March.

First, the bright spots: No. 14 Malik Heinselman continues to look like the real deal at 125 pounds. After a 2-0 start to the season in that tri-meet, Heinselman continued his unbeaten run, claiming a 10-4 decision over No. 22 Nicolas Aguilar to open the meet, while never looking truly challenged his foe. Heinselman has spoken before about the role that confidence plays in his game, and he’s wrestling with a lot of confidence – and an added bit of strength and conditioning gained this offseason.

“Just preparation in the wrestling room,” Heinselman said when asked about where his newfound confidence comes from on Jan. 22. “Over the summer I prepared a lot, was lifting a lot, running a lot, wrestling a lot and I just feel that I have myself to another level over the summer and I have prepared and now I feel like I can do what I should do.”

“I want to be one of the top contenders this year at 125 pounds,” Heinselman said. “Of course, Spencer Lee is the big dog but I want to do my best and I’ll do what I came here to Ohio State to do.”

Ohio State’s top title contender, No. 2 Sammy Sasso at 149 pounds, didn’t always look fully dominant against an experienced Michael VanBrill, but he was able to claim a solid 11-5 decision.

Ethan Smith put up a strong showing against Brett Donner at 165 pounds, mounting a significant barrage of takedowns to notch a 10-3 victory. It wasn’t the major decision that he was hunting for (same for Sasso), but it was a quality bounce back win for the 165-pounder, who’s starting to look like himself after a late decision to cut back to 165 pounds following an injury to Carson Kharchla that Ohio State confirmed to BSB will sideline him for the season.

At 174 pounds, Ohio State’s hunt for a major decision finally yielded results, as No. 3 Kaleb Romero looked every bit his ranking against No. 24 Joseph Grello in a 15-5 major decision to earn the Buckeyes four team points, enough to erase what was an 11-9 Rutgers lead at the time and put the Buckeyes back in command, 13-11.

Now, the bad. Jordan Decatur was nearly able to hold No. 6 Sammy Alvarez to a standard decision rather than a major decision (worth one extra team point) but couldn’t find enough offense late and fell 14-3. Dylan D’Emilio suffered a nearly identical fate at 141, falling 11-2 to No. 1 Sebastian Rivera.

At 157, Elijah Cleary showed at least slightly more interest in scoring than he did in the opening tri-meet, but couldn’t generate the offense needed to fend off Robert Kanniard, as Kanniard claimed a 7-5 sudden victory with a takedown after three even periods.

“We’re not happy with anybody being a defensive wrestler,” Ryan said on Jan. 22. “When you’ve gotthis many competitive people in a sport you have to figure out ways that your strength can overcome their weakness.

“Elijah just hasn’t trusted his offense. He’s been here for a long time and we really haven’t seen any adjustment of any kind to what we’re preaching. He struggles to let go in a match. Now his defense is good and he’s strong, he’s fit, but until he says (that he) cares enough to make this change, there’s nothing that we can do.”

No. 11 Rocky Jordan’s 9-6 loss to John Poznanski was the biggest surprise of the dual and Ohio State’s most frustrating defeat. Jordan rallied late and looked primed to pull out a late victory, but allowed an escape and failed on an attempt to take Poznanski down with less than a minute remaining.

With the Buckeyes trailing 14-13 after that Jordan loss, the responsibility to pull out a win fell to Gavin Hoffman at 197 pounds and heavyweight Tate Orndorff. Matched up with a top 15 wrestler in Billy Janzer, Hoffman delivered a signature performance when the Buckeyes needed it most, snagging a 3-2 decision and putting OSU back on top, 16-14 entering the final bout.

After a brutal 0-2 start to the season, the Utah Valley transfer finally came alive for the Buckeyes to close out the dual and narrowly avoid a second conference dual loss in three tries. After a wholly defensive fight, Orndorff claimed a takedown in the final minute to pair with a penalty point and an escape to withstand the Colucci attack and head to the lockers with a 4-2 decision that sent the Buckeyes to 2-1 on the year.