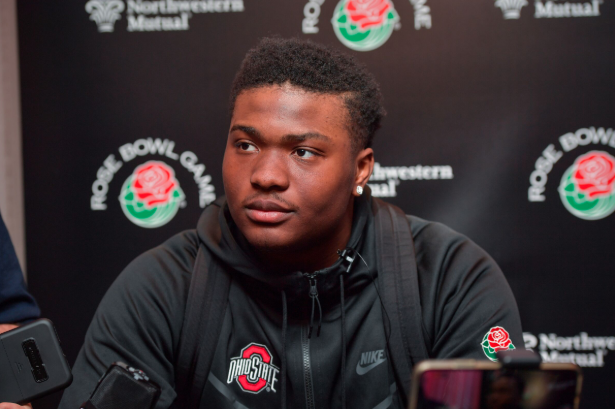 With the NFL scouting combine underway from Wednesday through Monday, the upcoming weekend sets the scene for plenty of debate as the April 25-27 draft in Nashville, Tenn., looms.

Among the arguments, one has been rapidly swirling since the 2018 season ended and the Jan. 14 deadline for underclassmen to declare passed.

While former OSU defensive end Nick Bosa is also in discussion atop the available players — considered the No. 1 overall prospect, headlining 10 Buckeyes from the class — Haskins drove the discussion earlier in the week Monday when NFL Network analyst Daniel Jeremiah fielded questions from reporters on a teleconference previewing the scouting combine.

Formerly an eight-year scout in the league with the Baltimore Ravens, Cleveland Browns and Philadelphia Eagles, Jeremiah offered his insight when asked about whom he considers the draft’s top signal caller as the debate rages on between Haskins and Oklahoma’s Kyler Murray.

“It’s polar opposites with these quarterbacks with those top two guys for me,” Jeremiah said. “I started out with Haskins ahead of Kyler Murray. Prototypical size for Haskins, pure pocket passer, can make every throw. Really turned it on late in the year, which was good to see.

“The concern a little bit there was just the immobility, being able to kind of get himself out of trouble if he gets under some heat, being able to move off of his spot and be consistent and be accurate. That was my concern with him.”

Murray backed off his commitment to baseball with the MLB’s Oakland A’s and has emerged among the NFL’s intriguing quarterbacks after he showcased dual-threat ability and won the 2018 Heisman Trophy. Haskins, who was 1 of 3 finalists with Murray for the award, is contrarily a pocket passer.

“Kyler Murray, my hang-ups were really two,” Jeremiah said. “One was his commitment, his focus on football, was that going to be there? I think it’s impossible for a quarterback to juggle two sports. Even just leaving the possibility open-ended, I don’t know how a team could have taken him in the first round if he didn’t completely eliminate baseball from the conversation, and that’s what it sounds like he’s done. So that took care of the first concern for me.

“And the second concern was the bulk. I didn’t know how much this guy weighs — you hear all these different numbers thrown around during the fall. Some folks told me he was going to be 185, 183 pounds, and that to me was a major concern. Just durability wise, I don’t know if you can hold up at that size. That’s a major issue for me.”

Murray measured up Thursday — day three of the scouting combine — with quarterbacks and other positions at 5-10 1/8 and 207 pounds while Haskins checked in at 6-3 3/8 and 231 pounds. Believed to be shorter and previously listed under 200 pounds, Murray’s confirmed height and weight factor heavily into the conversation with Haskins.

“Kyler can make every single throw,” Jeremiah said. “He can drive the ball. Those hole shots against cover-two on the sideline between the corner and the safety, that’s a big-boy throw. He makes those effortlessly. So he’s got plenty of arm strength. I’ve seen him work through progressions. You see it more with Dwayne, but I’ve seen Kyler Murray show that he can do that.

“And then the X-factor is just when he takes off. It’s electric. So that to me was kind of the tiebreaker. I think Kyler Murray can do a lot of the things that Dwayne Haskins can do throwing the football, but then Kyler has that extra element with what he can do athletically.”

Beyond the quarterbacks and Bosa, wide receiver Parris Campbell and defensive tackle Dre’Mont Jones round out Ohio State’s high-round options in the eyes of Jeremiah. Wide receiver Terry McLaurin came on strong with an impressive week before the Senior Bowl at Ladd-Peebles Stadium in Mobile, Ala., last month but Campbell is competing to become the top player off the board at the position.

“Starting with Ohio State, to me, I’m anxious — the guy I’m anxious to see more than anybody else — you just go to the wide receiver position,” Jeremiah said. “McLaurin is fun to watch, but Parris Campbell, to me — A, what’s he going to run? Because I’ve heard nothing but how explosive he is and you can see it when you watch the tape, but (Campbell) doesn’t run a variety of routes and his hands are a little bit inconsistent. So I want to see him catch the ball — that’s one thing I’ll be looking for from him. But man, he’s going to put on a show once he gets on the 40(-yard dash) line.”

In a historically deep draft class of defensive tackles, Jeremiah said Jones factors into the second-tier interior linemen available. Breaking down the position group, Jeremiah pegged Jones for day two in one of the second or third rounds, but ESPN analyst Mel Kiper Jr. considered the former Buckeye as an option for the New England Patriots at No. 32 overall.

“When you look at tiers, I mean, in the first-round tier — Quinnen Williams, Christian Wilkins, Ed Oliver, Rashan Gary, who I think is more of an edge guy, Jeffery Simmons, and I think (Dexter) Lawrence probably factor in there in the 20s or the late one, and then you get into that next tier for me, you start getting into Jerry Tillery from Notre Dame — I really like Armon Watts from Arkansas, who’s just real, real strong-handed guy who’s solid on tape,” Jeremiah said. “Gerald Willis from Miami, Dre’Mont Jones from Ohio State — that’s kind of that next (day) when you’re looking at some of those interior guys. L.J. Collier to me, I have him on the edge, but some people at 280 pounds will look at him maybe as a three-technique, so he’s in that range, as well. I really like that second-round group of defensive tackles.”