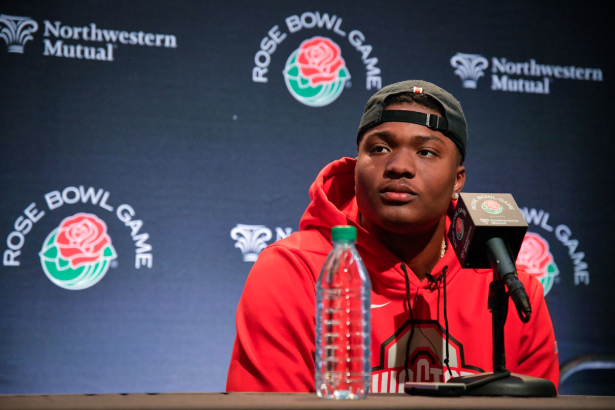 With the NFL scouting combine around the corner, the league’s 2019 draft is closer than it seems.

After the Feb. 26-March 4 combine at Lucas Oil Stadium in Indianapolis features 10 former Ohio State players, the bevy of Buckeyes will hope to be called on April 25-27 when the draft takes place in Nashville, Tenn.

Among the prospects, OSU has several selections standing out right now. On a teleconference Tuesday with reporters, ESPN draft analyst Mel Kiper Jr. discussed where Ohio State’s handful of first-round hopefuls might land.

According to Kiper, former Buckeyes defensive end Nick Bosa (6-4, 263) and Kentucky’s Josh Allen (6-5, 260) are among the top two options, regardless of position. With both franchises in the market for a pass rusher, the Arizona Cardinals possess the top pick, followed by the San Francisco 49ers at No. 2 overall.

“I don’t think it’s much of a gap,” Kiper said of Bosa and Allen. “Bosa — the only reason there’s not a big gap is because of durability. Nick Bosa had an injury (knee) his senior year of high school and then the (core muscle) injury this year, so I think that’s the only issue there. Josh Allen was more of a one-year standout. He had 17 sacks this year, only had seven last year.

“So I think you look at that. He doubled his tackles-for-loss numbers. He really came into his own this year. He was a good player, but he became a great player this year. So I think Josh Allen is going to be very interesting because (San Francisco) can go either way. I’m thinking more Bosa (for Arizona), which would allow Allen to be that edge guy that the 49ers really need.”

With quarterback-needy teams following the Cardinals and 49ers, former OSU quarterback Dwayne Haskins (6-3, 218) has an interesting pull on the order of the draft. After one year at Ohio State, Haskins has emerged as arguably the best arm available in 2019, which might force the hand of clubs waiting outside the top five.

“Arizona can also trade out of there, maybe allow somebody to move up to take Dwayne Haskins,” Kiper said. “Either way, (the Cardinals) could (pick or trade). The 49ers are either going to be looking at Allen or Bosa, maybe both if the quarterback goes one (to Arizona).

“But Josh Allen fits what (San Francisco) want(s). Bosa would, too. But I think Allen, with (the 49ers) having Solomon Thomas and (DeForest) Buckner and (Arik) Armstead, you need an edge-pass rusher. Buckner really came through with a big year, but Allen would really help that front seven.”

Meanwhile, the quarterback debate with Haskins has heated up since Oklahoma’s Kyler Murray (5-10, 195) backed out of his MLB commitment to the Oakland A’s and decided to stay in football, a decision that came after a junior season in which he won the 2018 Heisman Trophy. Haskins and Murray, who were 2 of 3 finalists for the Heisman, have polar-opposite skillsets but are in competition to become the first quarterback off the board.

“Does he, in fact, go ahead of Dwayne Haskins?” Kiper said of Murray. “He could. He’s kind of a wild card. To compare him to Dwayne Haskins isn’t fair, because they’re totally different quarterbacks. Their style of play would change the way you go about your offense if you bring him in. Haskins is a traditional, drop-back pocket passer whereas Kyler can do everything. He can throw from the pocket, but you want him outside the pocket.

“There’s a stat — (ESPN draft analyst) Todd (McShay) and I have talked about this — 6-foot and under quarterbacks have less passes batted down than 6-foot or taller quarterbacks. So the height’s not a big deal, strong throwing through windows and he’s smart. You saw what he did against Alabama after that team fell behind early. Didn’t even have (Oklahoma wide receiver) Marquise Brown healthy for that game yet, but he lit up Alabama. That defense is (head coach Nick) Saban‘s acumen.”

Kiper has mentioned the Jacksonville Jaguars (No. 7 overall), Miami Dolphins (No. 13 overall) and Washington Redskins (No. 15 overall) among the franchises intrigued by trade-up scenarios for Haskins. The New York Giants sit at No. 6 overall, but may get jumped by one of those aforementioned teams interested in Haskins or even Murray.

“I think right now it’s a two-horse race,” Kiper said. “To say which one will be the first quarterback taken, right now, I would lean to Haskins, but it’s not a lock that Haskins will be the first quarterback taken. But I would lean Haskins right now. I have him going six to the Giants. Maybe the Giants have to trade up to get him. I have Murray right now at 13 to Miami. I thought about him to Cincinnati at 11.

“And I can say, it’s going to be interesting what (Oakland Raiders head coach) Jon Gruden does at four, whether he moves Derek Carr or he decides that, ‘Hey, I can get a little bit of upgrade,’ possibly, with a guy that can exchange points, (like the Kansas City Chiefs did) with Patrick Mahomes and take Kyler Murray. I think (Gruden is) going to be the interesting pick at No. 4.”

Defensive tackle Dre’Mont Jones (6-3, 283) follows Bosa and Haskins as the next former Buckeye likely to be taken in the first round. Despite the draft’s historically deep class of interior defensive linemen, Kiper considered Jones to the Super Bowl LIII champion New England Patriots at No. 32 overall.

“I think there’s several, if they got down that far, they could be that type of player — if you look at, say, Jerry Tillery (6-7, 305) of Notre Dame if he were there,” Kiper said of the Patriots. “Dre’Mont Jones of Ohio State, Gerald Willis III (6-4, 300) from Miami of Florida — they’re all in that first-round discussion.

“The interesting one’s going to be Jeffery Simmons (6-4, 300) of Mississippi State. The kid’s going to be a top-10 talent — some would even argue top-five talent — that would be there (late first round) because you have the off-the-field issue and then he had the ACL injury. So if you theoretically redshirt him for a year, you’re getting, like I said, a top-five, top-10 talent for the final pick in the first round. He’s a tremendous defensive tackle prospect.”

Parris Campbell (6-1, 205) rounds out OSU’s high-round options. Among a mix of wide receivers without an absolute No. 1 prospects, Kiper included Campbell in the bunch of playmakers when he shared his take on South Carolina’s Deebo Samuel (6-0, 210).

“I think he’s right in the mix to be a solid, early-to-mid (second-round selection),” Kiper said of Samuel. “I wouldn’t count out late (first-round pick) because the receiver group is … there’s really, I think, three first-rounders — Preston Williams (6-4, 210) from Colorado State would be in that mix. There was one off-the-field issue, but I think he’s got a shot to get into the solid second round.

“Parris Campbell of Ohio State and Deebo Samuel all have the same grade, (as well as) N’Keal Harry (6-4, 213) of Arizona State. I think Samuel, at the Senior Bowl week, really helped himself. He’s a kid who’s got great versatility, he’s got explosiveness. I’d say he doesn’t get past the early-to-mid — at worst — the late second, but I think he’s a solid second-round pick right now.”