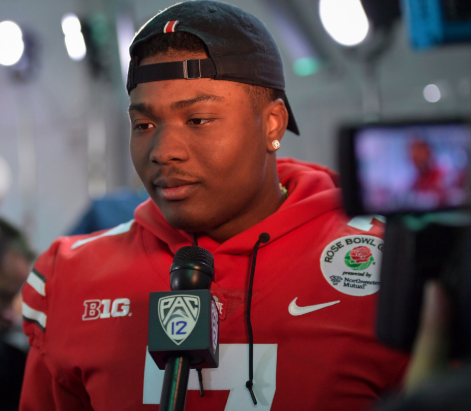 On the third day of the NFL Draft Combine, which spans from Feb. 26-March 4, the quarterbacks, wide receivers and tight ends undergo measurements, medical exams and interviews.

Haskins’ hand measured at 9 ⅝ inches, his arm was 33 ½ inches and his wingspan was 79 ½ inches, which gives him the second-longest wingspan of the tested quarterbacks.

Former Buffalo quarterback Tyree Jackson stood in at 6-7, 249 with a 83 ¾-inch wingspan, marking the longest wingspan among tested quarterbacks. At 249 pounds, Jackson was also the heaviest signal caller.

Perhaps the most anticipated measurement of the day was that of Oklahoma’s Kyler Murray. The Heisman Trophy winner is an elite draft prospect, but faces concerns regarding his lack of size.

However, Murray’s measurements of 5-10 ⅛ and 207 pounds bode well for his draft outlook, as well as his hand being measured at 9 ½ inches.

The former Sooner had the shortest arm (28 ½ inches) and wingspan (69 ½ inches) among tested quarterbacks, but standing taller than 5-9 and weighing more than 200 pounds should help ease the minds of prospective NFL executives.

Meanwhile, Haskins’ measurements should only help him, too. Weighing in at 231 pounds might indicate that the former Buckeye has been hitting the weight room hard, and will possess the size and strength to take hits in the NFL.

The quarterbacks will complete the bench press, Wonderlic test and media interviews on March 1. Then, they will take the field with the wide receivers and tight ends to show what they can do on March 2.

Haskins will reportedly throw during the on-field portion of the Combine, while Murray has reportedly opted out.

BSB will continue to track the events at the NFL Combine as they occur.