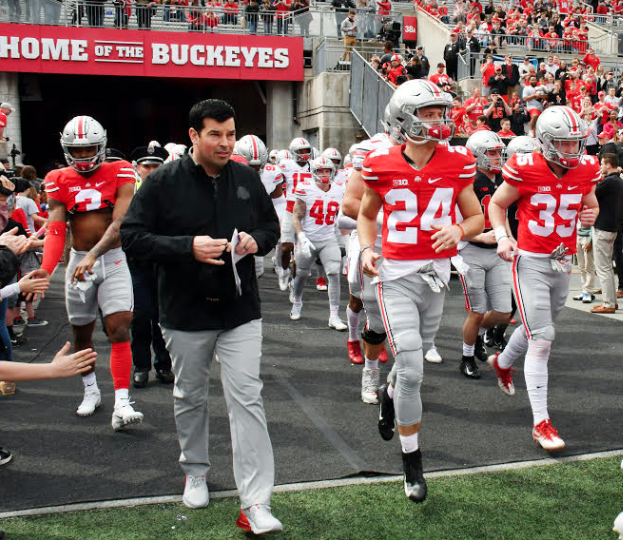 Welcome to Ohio State’s 2020 spring game, or at least, the closest thing to it, given the complete shutdown of sports across the country in response to the COVID-19 pandemic. While the real Buckeyes may not be able to hold their annual showcase game today, there’s no video game pandemic, meaning that it’s time for the virtual Buckeyes to shine.

Now, there are a few things to note before we jump into the results of the simulation. Firstly, for a full explainer of what this all is, take a look at our draft page, which has everything you need to know, from the idea behind this, to the coaching staffs, to the players that will play for each team.

Because we’ve drafted teams however, there are some limitations with the rosters we’re working with. NCAA 14 has 70-man roster limits, and we only drafted enough players to fill a two-deep, which means there will not be as much of a rotation as there is in real life, largely because there aren’t any walk-ons on this virtual roster. It also means that a few scholarship players that weren’t drafted have been created as flex players that can play for either team, and that one player, club team legend Chris Booker, played both ways as a wideout and cornerback. A few of those will pop up throughout the recap.

Additionally, because it’s a video game, there are also some niche spring game rules that we can’t really implement. Quarterbacks can’t wear no-contact uniforms, which means that they’re full-go and allowed to run in this game. Kicks can’t be retried 45 times from progressively longer distances, and it isn’t raining, like it does at seemingly every spring game (OK, that one could be done, but who wants a soggy spring game).

With all that said, there’s no real football, so minor inconveniences and changes in a video game simulation of a scrimmage will just have to be forgiven, as will some wonky quarterback rushing stats that probably wouldn’t happen for a real game. We’re hungry for football, and this is just about the best that we can do, short of strapping on the pads ourselves and violating stay-at-home laws to livestream a pickup game from inside the BSB office, and frankly, that wouldn’t go well for anybody.

The Silver Bullets won the first battle, forcing three straight incompletions to cause a punt after absorbing a 13 yard rush from Fields and a 17 yard rush from Demario McCall to open the drive. Jaelen Gill bobbled the punt, but managed to recover before any serious damage was done.

For Gray, freshman C.J. Stroud was given the nod to start for the first half, and he got some help on the first play from scrimmage, when halfback Marcus Crowley showed off a healthy knee, gashing the defense for 27 yards. Stroud couldn’t take advantage though, completing a 2-yard pass to Garrett Wilson, before being sacked on second down and launching a bad interception to Ronnie Hickman on third-and-long.

Off of that interception, Scarlet managed to find its way onto the scoreboard first, thanks to a short McCall touchdown run set up by a 15-yard Fields keeper the play before.

Gray was able to respond with a solid drive led by a few more big Crowley runs, but a third down sack pushed Stroud and his offense out of the red zone, and forced a 41-yard field goal try for Blake Haubeil that the senior pushed just left, keeping the score at 7-0.

Scarlet struck again off of the miss, marching down the field with a nice drive capped by a 37 yarder knocked through by punter Drue Chrisman to take a 10-0 lead. Gray again mounted a drive to respond, but again it was Haubeil with a tough miss, this time from 39 yards that caused some murmurs and 2016 Michigan flashbacks in the sold out virtual crowd.

The second quarter looked primed to continue as the first quarter had ended. Fields moved his side down the field, but couldn’t keep it going, with the drive stalling just before it could get within field goal range, forcing a punt. Gray responded with a punt of its own, giving Scarlet the ball back with 5:22 (we simmed eight-minute quarters) to play in the half and a long field in front of it.

This time, there was no stalling. Fields ripped off two more good runs, McCall split through the line for 18 yards, and a few plays later, Fields was in the end zone after a 12-yard scamper to put Scarlet in command, 17-0.

The two sides traded punts until a deep ball to Kamryn Babb broke the stalemate for Scarlet, setting up another Chrisman field goal, this time from 36 yards out to take a 20-0 lead into the half, with Gray looking for answers on both sides of the ball.

Both teams used the halftime period to rotate in the second-string players, which also meant a quarterback change on both sides. Gray took the ball to open the half, and did so with another true freshman, Jack Miller, in to take the snaps. Miller rushed for 4 yards on his first play, but couldn’t get much else going, as Gray was forced to punt after just three plays.

Gunnar Hoak had similar early jitters for Scarlet, completing a 6-yard pass to Babb but unable to find any space on third down, sparking another punt – and another bobbled return for Gill.

Gray went three-and-out again, and Scarlet looked ready to do the same, but halfback Mitch Rossi saved the day, almost singlehandedly carrying the team down the field to set up a 50-yard field goal for Chrisman. He pushed it left, but Rossi should still be considered a hero for his efforts.

Thanks to a good opening run from Steele Chambers and a couple Miller completions, Gray finally managed some traction on the ensuing drive, and put some points on the board for the first time on a 43-yard Haubeil kick. The two teams traded punts until the end of the quarter.

Hoak opened the fourth quarter in the funniest way possible: with a 45 yard run, which set up a a 2 yard keeper on the next play to extend Scarlet’s lead to 24, 27-3. Gray’s second-team defense should be ashamed.

Miller managed to keep his momentum in the air going on the next drive, moving down the field and helping Gray score its only touchdown of the game, with Crowley capping a pass-heavy drive with a 6-yard touchdown rush. The 2-point conversion pass to Jaxon Smith-Njigba cut the Scarlet lead to 27-11. It wasn’t enough, however. Gray couldn’t get the offense going again, and another Chrisman field goal all but sealed the win for Scarlet.