Mike Weber Selected By Dallas Cowboys With No. 218 Overall Pick In 2019 NFL Draft 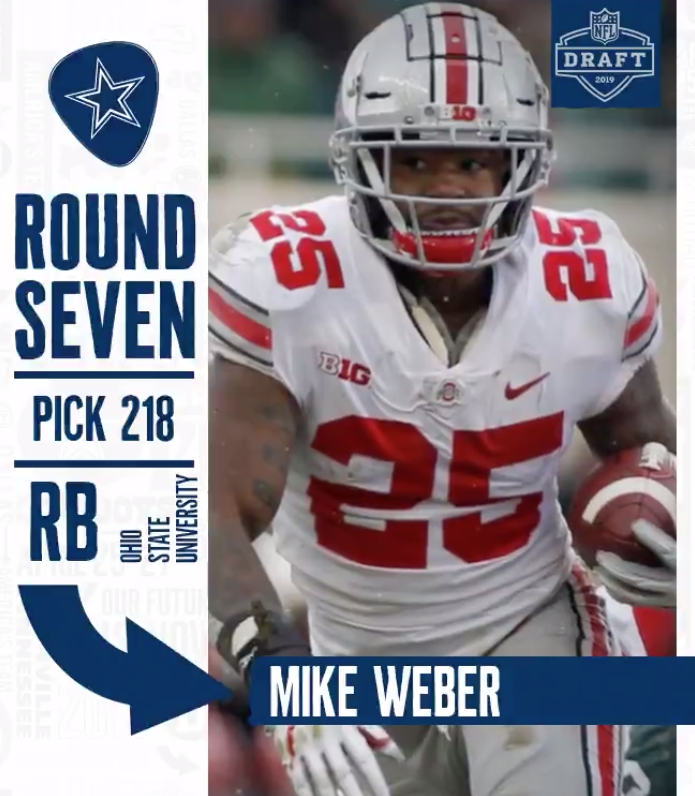 Former Ohio State running back Mike Weber was selected Saturday by the Dallas Cowboys with the 218th overall pick in the seventh round of the 2019 NFL draft.

Weber ran for 2,676 yards and 24 touchdowns in 38 games while at Ohio State. The Detroit native was effective for the Buckeyes, averaging 5.9 yards per carry for his career.

Weber rushed for a career-high 1,096 yards as a redshirt freshman, earning 2016 Big Freshman of the Year and second-team All-Big Ten honors (coaches and media).

As a sophomore, Weber ran for 626 yards and scored a career-high 10 touchdowns during his 2017 campaign, where he was limited by a hamstring injury.

The Detroit Cass Tech product could have entered his name into draft consideration last year, but he returned for a final season sporting the scarlet and gray. Weber was dynamic while splitting carries with J.K. Dobbins, rushing for 954 yards and five touchdowns.

Weber was also a reliable option in the passing game, hauling in 54 receptions for 297 yards and one touchdown through the air in his career.

The former Buckeyes tailback improved his draft stock at the NFL scouting combine with a blazing 4.47-second 40-yard dash, which tied for third fastest among running backs.

Weber measured in at 5-9 5/8 and 211 pounds and pressed 225 pounds on the bench 22 times, tying him for the sixth-most reps among running backs.