Michigan QB McNamara Thinks Last Year’s Ohio State Game Got Out Of Hand: ‘I Thought The Gap Was Pretty Big During That Game’ 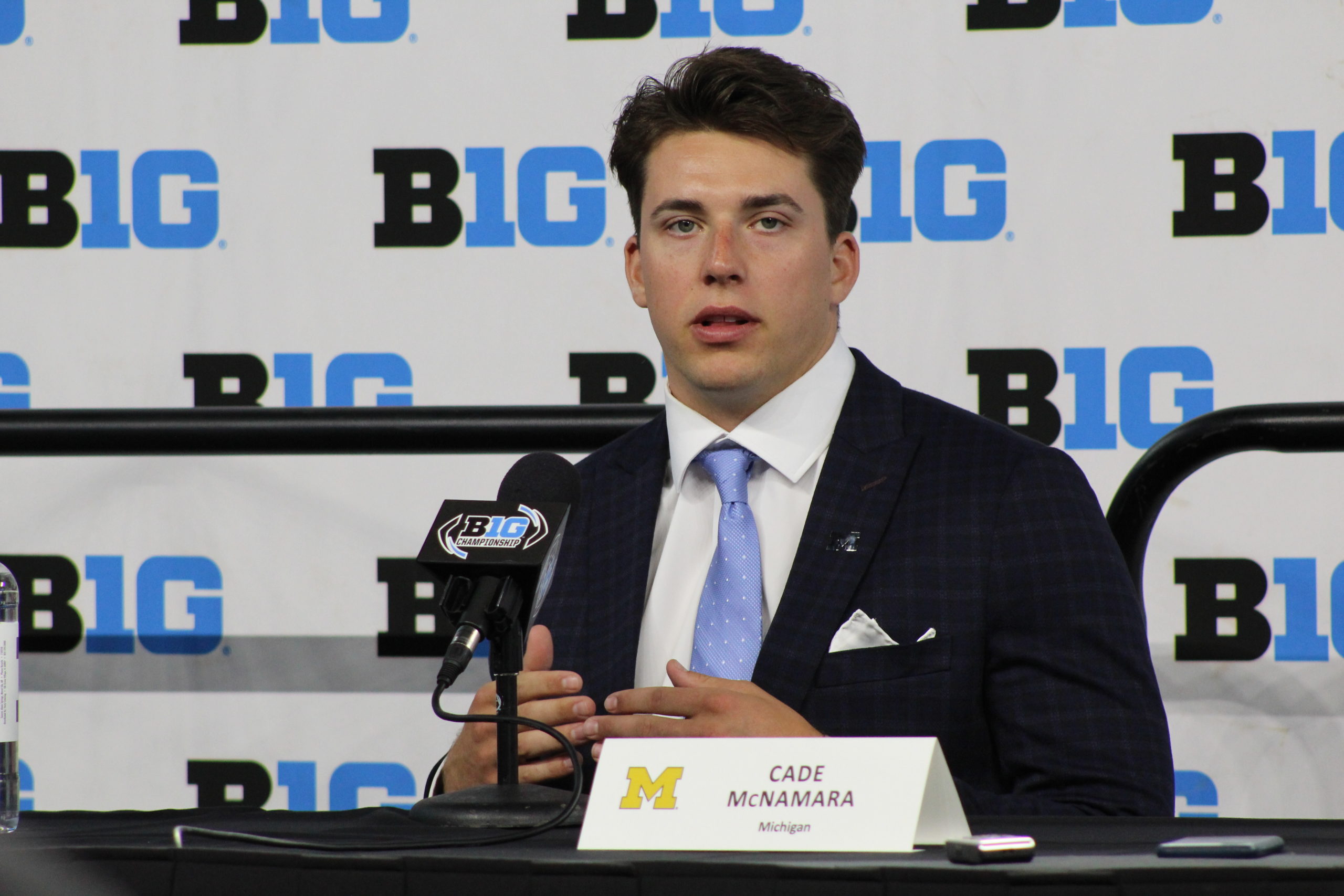 It’s a reality that Ohio State fans haven’t experienced in the Big Ten Championship Game era: Michigan is the conference’s defending title winner for an upcoming season. Within that same thought, the Wolverines are also the latest victors of “The Game.”

In November 2021, Michigan claimed its first win over Ohio State in a decade — a 15-point victory in Ann Arbor. Eight months later, key members of the Maize and Blue took the stage at Big Ten Media Days at Lucas Oil Stadium, where the program won its first conference title since it earned a share of a regular-season trophy in 2004.

“I think (last year’s win against Ohio State) helps us a lot. It gives us more confidence that we’ve been there,” Michigan quarterback Cade McNamara said at the event. “There is less weight on our shoulders as to the stress of, ‘We have to do this.’ It was anxiety about, ‘Why Coach Harbaugh is on the hot seat? Why does he have to face the criticism?’ Because if anyone wants to beat Ohio State, it’s Coach Harbaugh, and I can promise you that. But I think now that we got that for him, I think now that we know what that looks like, we’re going to be even more confident going into that game.

“I think a part of being a leader — being a member of this team — is to make sure that we don’t become complacent. Not just myself, but as a team. We have stressed that mentality pretty strong this offseason that Team No. 143 is a different team and that what Team No. 142 did last season doesn’t matter anymore.”

Ohio State trailed at halftime against Michigan. After the break, the Wolverines outscored the Buckeyes 28-14, including four rushing touchdowns by then-running back Hassan Haskins, who was later drafted No. 131 overall in the 2022 NFL Draft by the Tennessee Titans. For 30 minutes of action, Michigan dominated the line of scrimmage on both sides of the ball for much of the game, with its defensive side controlled by Heisman Trophy finalist and 2022 No. 2 overall pick to the Detroit Lions Aiden Hutchinson.

“In a sense, I was surprised how kind of out of hand I thought it was. I thought the gap was pretty big during that game, and I’m sure Ohio State didn’t feel very good about that,” McNamara said. “I know that the offensive line was very confident in themselves going into that game, and our identity last season was that we’re going to be physical. I do not see that changing.”

Michigan tight end Erick All said his team’s performance wasn’t shocking to him. In fact, he expected his team to rise to the occasion against their rival.

McNamara and All understood the significance of their team’s victory in The Game.  The win broke an eight-game Ohio State win streak in the matchup and reestablished confidence that the Wolverines can hang with the Buckeyes.

As an added bonus for McNamara, All and the rest of the Michigan roster, they could take satisfaction in ending their rivals’ Big Ten title hopes and College Football Playoff aspirations. The Wolverines received those honors instead, defeating Iowa in the conference championship and clinching a CFP berth along with Alabama, Georgia and Cincinnati. Their CFP trophy hopes ended in the semifinal against the Bulldogs.

“We’re going around Michigan right now, and we’re able to see the impact that it left not just with our team but the Michigan fanbase and the state itself,” McNamara said. “A lot of our guys are starting to realize the platform that we have when Michigan football is winning and what that means for the state and the people. A lot of us have grown an appreciation for that, and we just want to continue to do that for the fans and for the state.”

According to McNamara, Michigan has only started on its path toward consistent success in the Big Ten and college football writ large. He said the 2021 season could be a cornerstone that helps build a structure for winning in Ann Arbor.

“It should be a foundation. I think everyone in our program is confident in the culture that we’ve developed, and I think it should be here to stay. For this season at least, it is,” he said. “The guys are confident in not just our ability, but what we’ve created at Michigan from a culture standpoint —from a mentality standpoint — has made such a big difference over the past couple of years. I only see this continuing to grow, and I’m here and the other guys that are here will make sure we stay on track.”

Haskins, Hutchinson and defensive end David Ojabo, who broke out in 2021, turned pro after last season. Ohio State returns its talented weapons aside from Garrett Wilson and Chris Olave, including C.J. Stroud, Jaxon Smith-Njigba and TreVeyon Henderson. Still, All believes the Michigan roster will have success against the Buckeyes this November.

“Beating Ohio State is a great feeling. We hadn’t beat them in a long time, and to be the (Michigan) team to do that is a great feeling,” All said. “It feels like we accomplished a lot, and we’re ready to get back out there and do it again.”