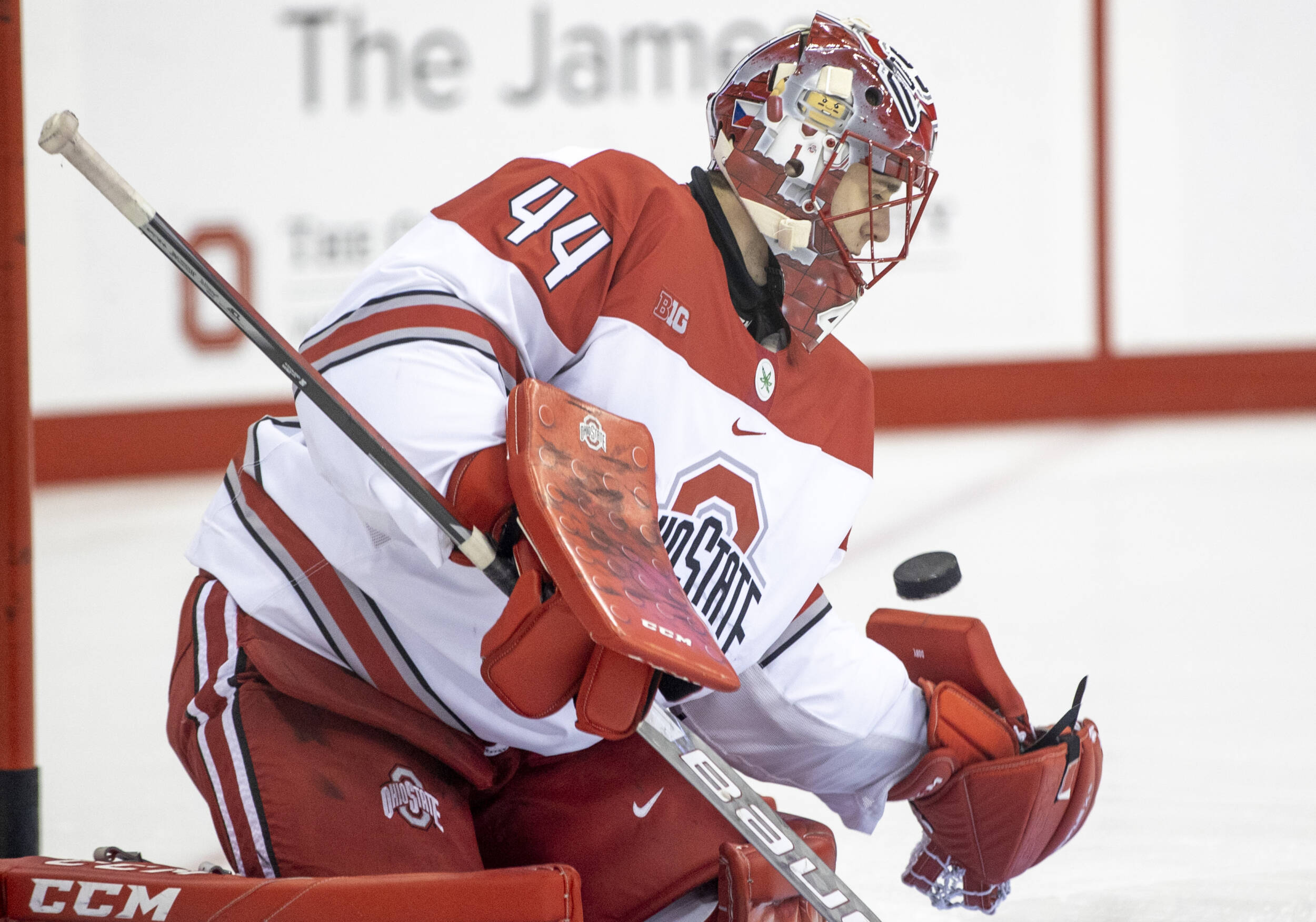 After each Ohio State men’s ice hockey season, the players vote to decide which of their teammates was the team’s Most Valuable Player, the Rookie of the Year, the Defensive Player of the Year, the “Unsung Player” award and the Most Improved Player.

This season, Jakub Dobeš, Georgii Merkulov, Mason Lohrei, Cam Thiesing and Joe Dunlap took home those honors, revealing their importance to the Ohio State program and how their teammates view their hard work on and off the ice.

Dobeš was selected as the team’s MVP — the third season in a row an Ohio State goaltender won the award. Dobeš capped a marvelous first year in Columbus with the Big Ten’s Goaltender of the Year honor. He also was named a co-Freshman of the Year. His .934 save percentage is second in school history and his 21 wins ranked fifth all-time. Dobeš’s 1,086 saves are the second-most in a single season for a Buckeye.

To go with his other conference honors, Dobeš earned first-team All-Big ten recognition. He played in 35 of 37 games while making 34 starts. The netminder was a four-time Big Ten Star of the Week, the national Rookie of the Month in October and the co-national Goaltender of the Month in January.

Merkulov was selected as the team’s Rookie of the Year. He was the team’s leading scorer with 20 goals and ranked first nationally with seven game-winning goals. Merkulov played in 36 of 37 games and had a team-best 34 points. The Big Ten awarded him with first-team honors for his efforts in 2021-22.

Lohrei was selected as the team’s Defensive Player of the Year after an honorable mention All-Big Ten season in which he had 25 assists and 29 points. He ranked in the top eight in the NCAA in assists per game and points per game among defensemen. His 25 assists rank 10th in Ohio State history for a single season by a defenseman and are tied for the eighth-most by a freshman skater.

The Madison, Wisc., native, was a two-time Big Ten Star of the Week and had a plus-16 rating while on the ice. He also blocked 41 shots in the defensive zone.

Thiesing was voted the Unsung Player of the Buckeyes. The freshman forward was fourth on the team in scoring with 25 points, including eight goals and 17 assists. He led the team with a plus-21 on-ice rating and paced Ohio State with 120 shots on net.

Dunlap was the Most Improved Player on the roster. The sophomore forward had seven goals and 13 assists while skating in 32 of 37 games for the Buckeyes. Dunlap had only scored once during his 17 appearances as a true freshman.

The Buckeyes also awarded Dominic Vidoli with the Scholar-Athlete award. Vidoli is a neuroscience major that won Academic All-Big Ten honors for his performance in the classroom. He also became a Krampade AHCA All-American Scholar and an Ohio State Scholar-Athlete. The junior skated in 19 games last season and contributed six points with two goals and four assists. He had a plus-six on-ice rating with 23 blocked shots.