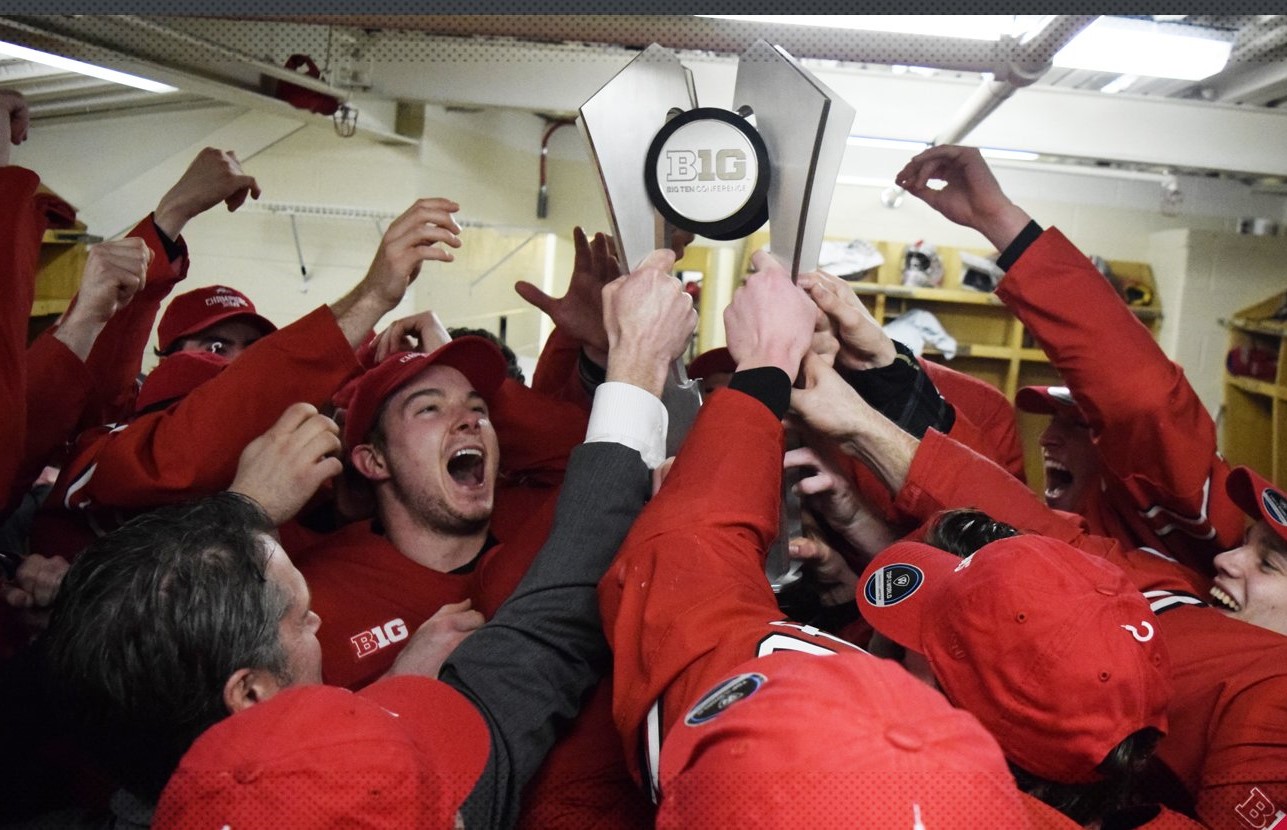 It just had to be the captain, the heart and soul of the team, that produced the dramatic overtime goal for Ohio State on Saturday night at Yost Ice Arena in Ann Arbor, Mich., when the Buckeyes cliched their first regular-season title in 47 years.

Senior Mason Jobst, the active career scoring leader in the NCAA, scored on a breakaway at 2:07 of the second overtime for the extra conference point after a 3-3 tie with the Michigan Wolverines.

The result gave the No. 6 Buckeyes (19-8-5, 12-6-4-3 Big Ten) their first crown since winning the inaugural Central Collegiate Hockey Association regular season in 1972 when the league had just three others school – Bowling Green, Ohio University and Saint Louis – the latter two long ago ditched their Division I programs.

The Buckeyes won the league tournament that season and again in 2004 for the only titles in school history.

“It’s an exciting night for our program,” Ohio State coach Steve Rohlik said. “I’m really happy for our players, our staff and our fans. We achieved one of our goals. It is exciting to get this first step out of the way. There’s still lot of hockey left to be played.”

It was a big night for program in many ways. As they were clinching, the Columbus Blue Jackets announced they had traded for Ottawa Senators and former OSU All-American (2014) Ryan Dzingel.

Yes, what a night.

In fact, by taking the Wolverines through 60 minutes of regulation and five minutes of the first overtime, the Buckeyes officially earned a tie and the point needed to secure the title because they took a potential two extra points from Michigan (13-12-7, 9-8-5-2), and Notre Dame lost to eliminate the Wolverines and Fighting Irish as the final two contenders for the crown.

That didn’t matter. The Buckeyes wanted to end up in the winning column of the second (3-on-3) overtime because they had lost to the Wolverines 4-2 the previous night to extend their losing streak to three games.

Actually, U-M started the second OT with a 4-on-3 power play but that was quickly negated and when a penalty to Jobst expired, he stepped out of the box and took a stretch pass from senior Sasha Larocque to score the winner and stun the crowd of 5,800.

“This was a very hard-fought weekend,” Larocque said. “The Team Up North played us hard and we were resilient and battled through a lot of adversity to come out on top tonight.

“We have worked so hard all season to accomplish this goal and I couldn’t imagine doing it with another group of guys. This is just the first step for our group this season, but it feels great now.”

That adversity he was talking about included losing sophomore forward Eugen Fadyeyev and senior defenseman Tommy Parran to ejections for checking from behind calls on two separate instances.

The Buckeyes took a 1-0 lead at 11:44 of the first on a power-play goal by junior Carson Meyer. After the Wolverines tied it later in the period, senior Brendon Kearney ripped a shot at 2:53 of the second for a 2-1 OSU lead and senior John Wiitala made it 3-1 at 7:57 of the second with another power-play marker.

Michigan cut the deficit to 3-2 three minutes later and Nolan Moyle scored at 9:35 of the third to make it 3-3.

OSU sophomore Tommy Nappier made 28 saves, only two in overtime.

The Buckeyes conclude the regular season against the Michigan State Spartans with games at Value City Arena on Friday (6:30 p.m.) and Senior Night on Saturday (5 p.m.)