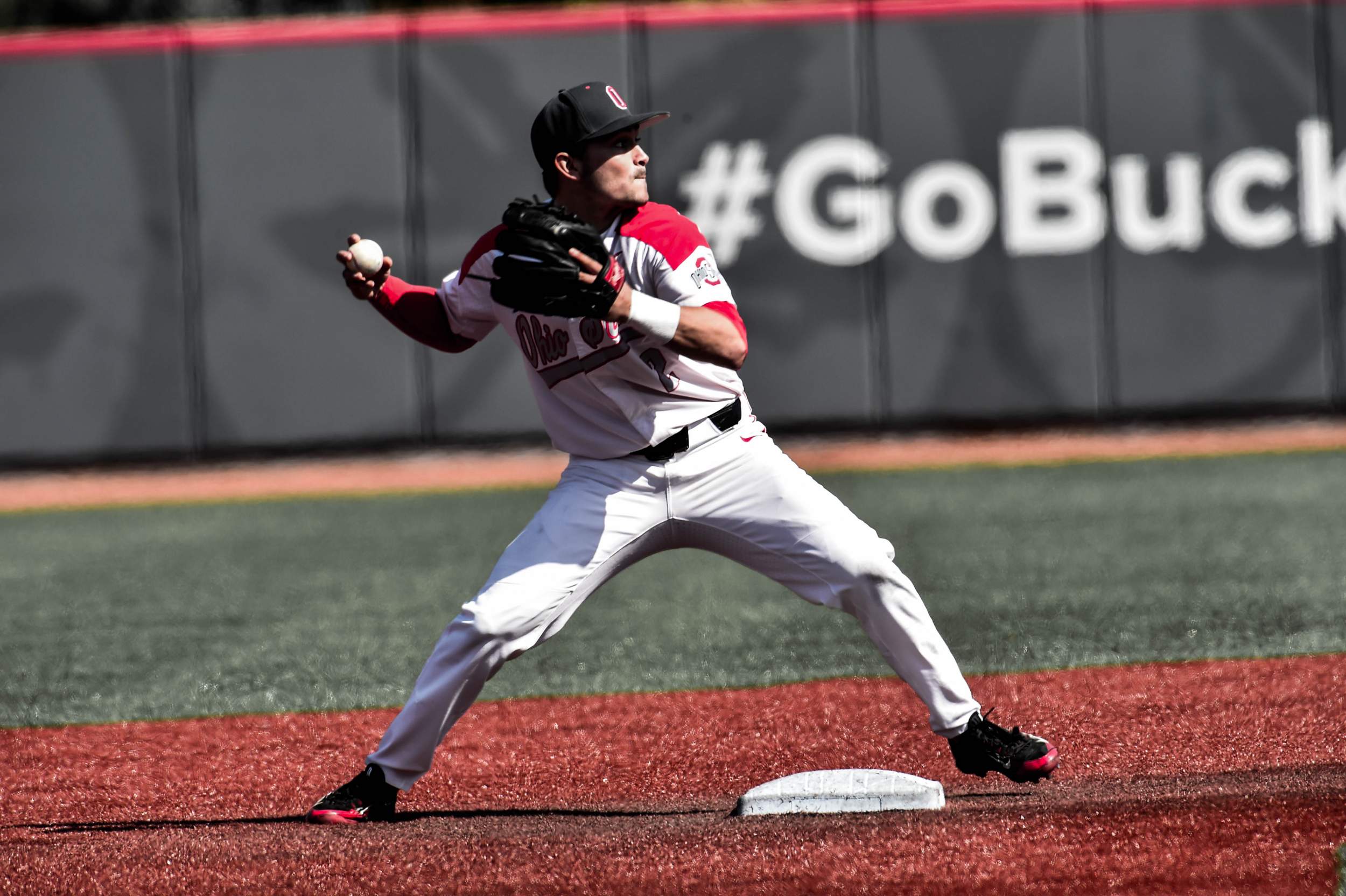 The Ohio State baseball team features quite a few new faces around the diamond, particularly on the mound, but the men up the middle remain the same — junior shortstop Noah West and senior second baseman Kobie Foppe (rhymes with floppy).

The middle-infield duo was a staple for a 36-win Buckeye team that made an NCAA tournament appearance a season ago. West led the Scarlet and Gray starting infielders with a .963 fielding percentage, and Foppe was not far behind at .954.

“It means a lot,” Beals said of having solid returning defensive players like Foppe and West. “And I think it brings a lot of confidence to our pitching staff that they know that they’ve got very capable defenders behind them — guys that can make the routine play, but guys that can also make special plays.”

West made a couple of special plays during the Scarlet and Gray’s three-game sweep of Seton Hall on opening weekend. The Buckeyes won their first two games with excellent defense behind superb pitching, only surrendering three runs across 18 innings.

“It helps a lot,” Burhenn said of having stellar defensive players behind him. “And it doesn’t matter who it is, I trust all of them, and they were just making incredible plays.”

After a scorching 4-0 start, Ohio State showed it is beatable in losses to BYU and Texas A&M Corpus Christi. With a young pitching staff, the Buckeyes know they must play solid defense to help build confidence within their young, talented arms. Fortunately for the inexperienced Ohio State pitching staff, there is a solid core in the middle of the diamond.

West and Foppe, who transferred from South Mountain Community College in Phoenix in 2018, did not start last season together, but ended up starting 39 and 54 games, respectively, in their first season as a tandem.

The double-play duo quickly became close friends, and it translated to success on the field.

“I love that kid,” West said of Foppe. “We live together and we have something special going for us. And I spend all my time with him at home and at the field, and I just feel like we have that connection away from baseball, too.

“He knows what I’m going to do. I know what he’s going to do, kind of build on the timing and it’s just a lot of fun. We relax each other, too, so it’s a good thing.”

In addition to their cohesion as a defensive pair, they also produced at the plate. Foppe hit .335 and led the team with a .441 on-base percentage as a junior.

Although West hit just .223 as a sophomore, the defensive specialist is batting .333 with two doubles, one home run, one walk, one sacrifice fly, three runs scored and four runs batted in through the Buckeyes’ first six games of 2019.

While more than capable with the bat in their hands, the Buckeyes’ middle-infield foundation is strongest because of the defensive prowess of both West and Foppe.

With a full season and another offseason under their belts, West and Foppe are excited about the chemistry that they have developed.

“He’s solid over there,” Foppe said of West. “I live with him too, he’s a roommate. So having someone that I’ve played with already last year is nice. You kind of know what to expect from him, what they’re going to do on certain balls or whatnot, what kind of flip you’re going to get. And having that familiarity is pretty big.”