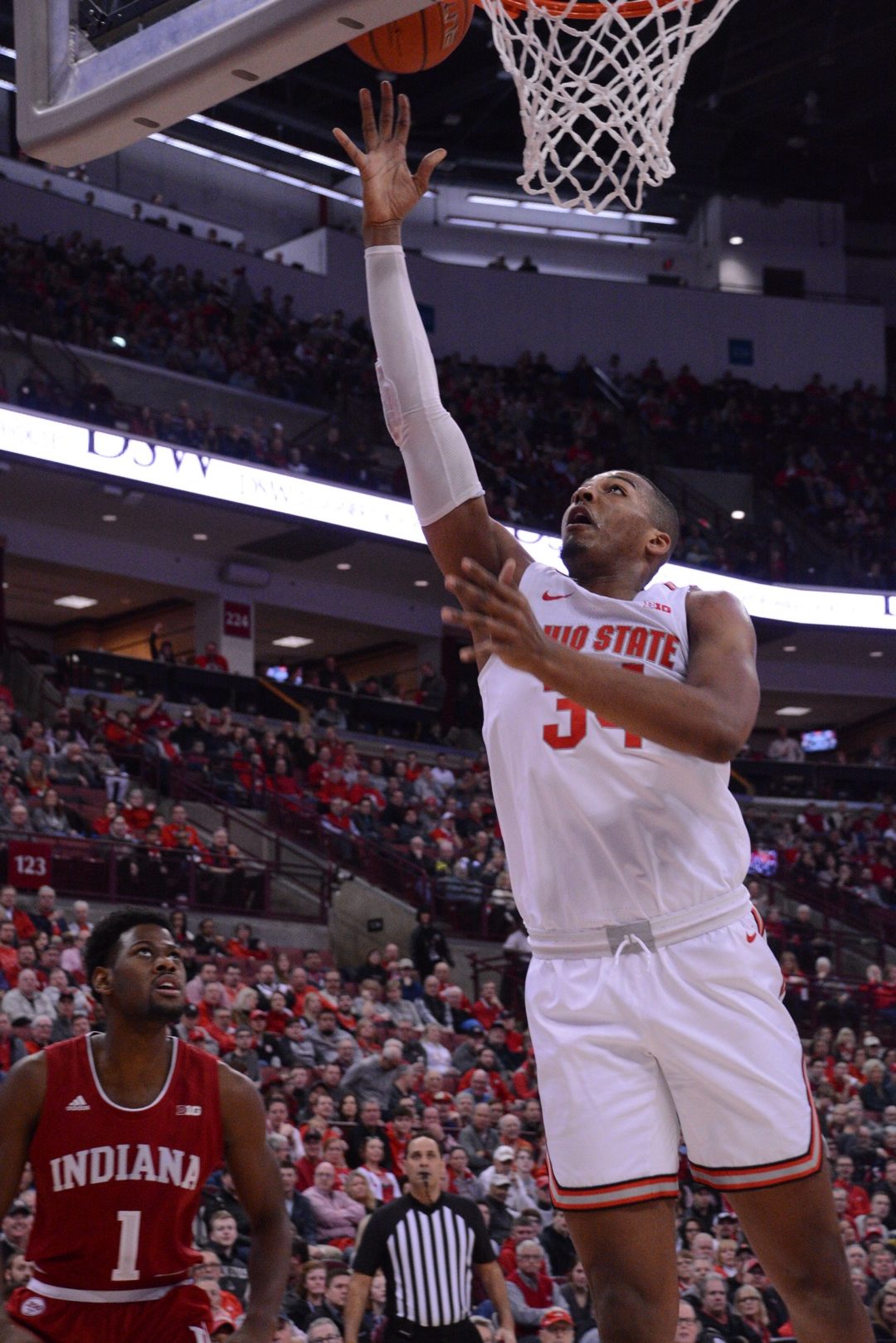 The Ohio State men’s basketball team carried its momentum from back-to-back Big Ten wins to a 61-58 victory against Michigan at the Crisler Center in Ann Arbor, Mich.

The 6-foot-9 forward from Westerville credited the rest of the Buckeyes for his success, but he was the one who carried the team in a dominant performance.

Sophomore guard Duane Washington provided the with a spark off the Buckeye bench with 17 points on 7-of-14 shooting, including 3 of 6 from three.

This rivalry game featured a play that one rarely will see on a basketball court. With Ohio State leading 57-56 with 34 seconds left, Michigan senior guard Zavier Simpson drew a shooting foul on Ohio State junior forward Kyle Young, but while Simpson was coming down he grabbed Young’s jersey and tore a hole in it. Upon review, the officials called a flagrant foul on Simpson following the shooting foul on Young.

Simpson and Young both knocked down a pair of free throws, forcing the Wolverines to foul junior guard C.J. Walker with 17.9 seconds left. Walker calmly knocked down both foul shots to secure the Ohio State victory.

Kaleb Wesson converted a strong and-1 finish to give the visiting Buckeyes a 54-53 lead. Michigan junior guard Eli Brooks responded with a three-pointer, which Washington answered with a triple of his own on a kick out from Kaleb Wesson.

“Kaleb was making great plays toward the end of the game,” Washington said. “He had two on the ball and found me at the top of the key, and I was just ready to knock it down.”

Neither team scored for more than two minutes (2:05) to open the second half until Michigan freshman guard Franz Wagner gave his squad a 30-28 lead. Washington went on a 5-0 run by himself before the rivals battled back and forth for most of the final frame.

The Buckeyes took their biggest lead of the second half when they went up 46-42 on back-to-back layups from Washington and Young. Simpson, a Lima (Ohio) Senior product, scored five straight points to give the home team the lead.

Michigan fourth-year junior forward Austin Davis and Young exchanged offensive rebound putbacks to keep the difference at one before Washington drilled a three-pointer. Then, Davis grabbed another offensive board and put it in to tie the game at 51.

Neither team scored for nearly two minutes (1:47) to open the game until Michigan sophomore forward Brandon Johns Jr. hit a three-pointer off an assist from Simpson. After Ohio State and Michigan exchanged baskets, Kaleb Wesson ripped off a 7-0 run with a triple, hook shot and turnaround fadeaway.

Simpson ended the run with a layup, but the Buckeyes quickly responded with another 7-0 streak, sparked by a layup by Washington and capped by Kaleb Wesson’s rebound putback and subsequent three-pointer. The run pushed the Buckeyes’ lead to nine points, but Michigan converted used a 9-2 rally, starting with an and-1 by Davis, to cut the lead to two.

After Kaleb Wesson and Johns traded makes from beyond the arc, Wagner hit a triple to take the lead. The Scarlet and Gray answered with a 7-2 spurt, sparked by a lead-changing three-pointer from sophomore wing Justin Ahrens.

Ohio State only led 28-27 at the half, largely because it gave up nine offensive rebounds, and the Wolverines shot 5 for 5 on free throws, while the Buckeyes did not even attempt one.

Johns led the Wolverines with eight points on 3-of-4 shooting, while Kaleb Wesson nearly doubled that with 15 points on 6-of-9 shooting and 3 of 5 from deep in the first half.