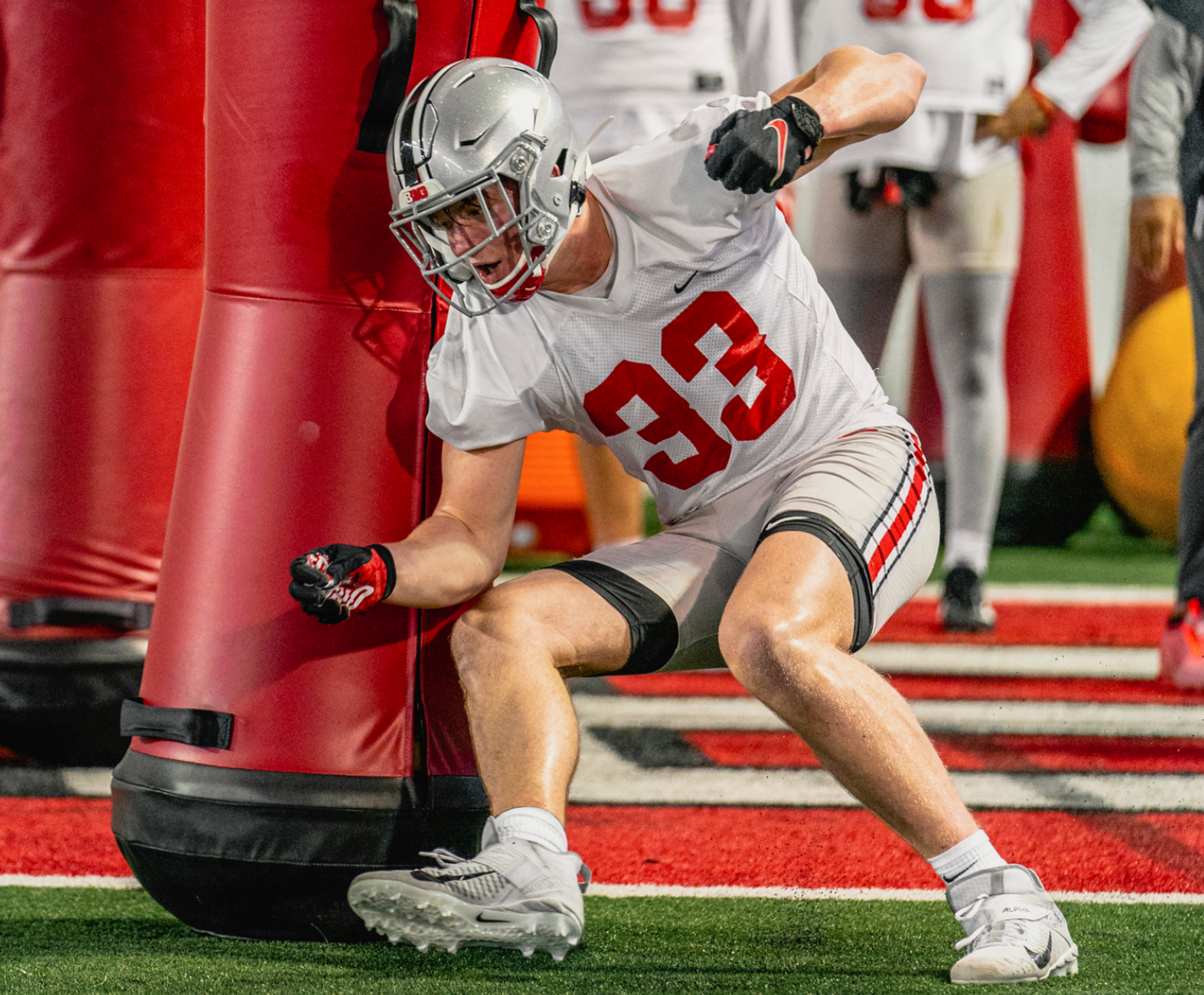 His three sacks trailed only junior Zach Harrison (4) off the edge and tied senior Tyreke Smith. Only Harrison, Smith and freshman J.T. Tuimoloau recorded more than his three tackles for loss in the regular season.

Still, Sawyer didn’t seem pleased with his regular-season performance during Rose Bowl-related media availability. The Pickerington, Ohio, native thinks he can provide more for his teammates and coaches, and his first opportunity for increased provision will be in the “Granddaddy of Them All.”

“All of us coming in are competitive guys. To play the game of football, you’ve gotta be a highly competitive guy and set expectations high. So maybe it didn’t go exactly the way I wanted it to go. I think I’d be lying if I said that, but I think it was a good step in the right direction for my career,” Sawyer said. “But we have more important things than my career we need to take care of; the Rose Bowl game and coming together as a team collectively.”

Sawyer recorded his three sacks against Akron, Maryland and Nebraska and played 34 or more snaps against the Zips and Rutgers. However, in the final five games of 2021, Sawyer averaged fewer than nine snaps per contest and received a combined 16 snaps against Penn State, Nebraska and Michigan.

He explained a leading cause for his inconsistent contribution: he found it challenging to remain focused during his first year in Columbus. Sawyer claimed the college football season is longer than high school, and the competition is more difficult, too.

“I think it’s just the day-to-day stuff. It’s a grind. It’s a long season. Just staying locked in and focused from fall camp – which is another grind in itself – and then jumping right into the season,” Sawyer said. “I think we all kind of learned from it, we’re gonna attack that and the next season a little bit differently, a little more aggressive, so I’m looking forward to that.”

Sawyer said his responsibilities had not changed after Ohio State lost to Michigan and began bowl practices earlier this month. Still, he and Tuimoloau started to adopt a different mentality as they prepare for an increased role on the defensive line moving forward.

“I think more so it’s kind of like our mindset’s changed a little bit. As this season’s kind of coming to a close and me and J.T. are developing and growing into men, I think we are starting to realize that we gotta take it to the next level with everyone we do,” Sawyer said. “We’re gonna have more of an important role next year and more of a leadership role next year that our defense needs. I think that’s more the way it’s going for us right now.”

Smith watched Sawyer and Tuimoloau’s impact steadily increase throughout the year and had high praise for the freshmen defensive ends during his brief time with the media.

Sawyer feels he can find another gear under future defensive coordinator Jim Knowles, who will coach his final game with Oklahoma State in the Fiesta Bowl before joining Ohio State on Jan. 2, 2022. Sawyer said he appreciates Knowles’ aggressiveness and his defense’s ability to reach the quarterback. The Cowboys lead all FBS schools with 54 sacks in 2021.

Knowles runs a hybrid defensive end and outside linebacker position called the “Leo,” where a player lines up on the edge, interior or off the line of scrimmage. Sawyer’s athleticism and size make him a potential candidate for the role, and the 6-4, 250-pounder even threw his name on the ballot on Dec. 16.

“It’s intriguing for a guy like me who’s kind of played everywhere growing up and played linebacker the majority of my life until high school,” Sawyer said. “They stand them up and back them off the ball. It’s intriguing for a guy like me who likes to play in space. I took a little bit of a look at that position. It looks pretty cool. I think I’m pretty good in coverage — I’d like to say that — so we’ll see how it plays out.”

However, Sawyer stopped himself in describing potential futures in the Buckeye defense and reminded himself and the media that Utah awaits Ohio State in the Rose Bowl in Pasadena, Calif.