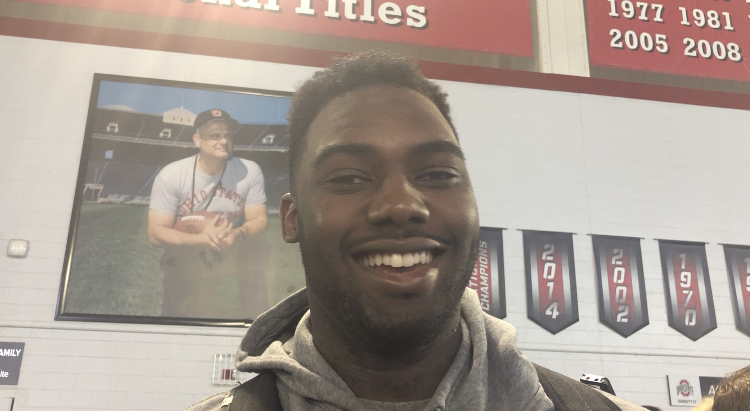 To surpass the 270-pound plateau, Petit-Frere absorbed three pounds to his 6-5 frame when he gulped down swigs of water as he scrambled his way into the Woody Hayes Athletic Center.

At 271 pounds, Petit-Frere’s last-second grab at water weight helped him survive a potential scolding from strength coach Mickey Marotti on day one, but the physical battle had just begun.

“Realistically, before I came in, I was 268,” Petit-Frere said. “But I drunk a little bit of water because I didn’t want to look light in front of Coach Mick. So I was like 271 when I walked into the building that first day. But now I’m like 295.”

As the prized possession in the Buckeyes’ second-ranked recruiting class of 2018, Petit-Frere’s Feb. 7 commitment and signature on National Signing Day last year bolstered the offensive line with the 247Sports composite’s No. 7 overall prospect, No. 1 offensive tackle and No. 3 player in Florida — the team’s highest-rated recruit and a much-needed addition after several misses at the position.

The potential Petit-Frere flashed in high school at Tampa (Fla.) Berkeley Prep has been evident since he made his 2018 transition to OSU, competing immediately for a backup spot on the offensive line as a true freshman and cracking the depth chart behind a three-year starter in then-senior right tackle Isaiah Prince.

But the biggest hurdle he had to make came off the field, where Petit-Frere was honest Monday about his ongoing battle of adding and maintaining weight with an 8,000-calorie nutrition program installed just for him.

“It’s been so hard,” Petit-Frere told BSB after Ohio State’s ninth practice of spring camp. “Because you’ve got to eat. I have a really fast metabolism. I have to eat like 8,000 calories a day. It’s basically six meals a day — huge meals — waking up in the middle of the night, eating something else.

“It’s a constant battle. At first, I understood. I was getting good during summer. And then once fall camp happened, I didn’t really know how to maintain during the season. I got another chance at it (in) spring ball, maintaining during the (2019) season. So I think it’s been another chance.”

With the ball in his court, Petit-Frere said he stays cognizant of vegetables and a balanced diet, but ultimately has freedom to load high-calorie meals into his regimen whenever he wants.

Using the Tapingo app, which syncs meal plans or campus cards with food orders delivered straight to customers, Petit-Frere picks from Five Guys and other options in Columbus.

On the field, Petit-Frere’s progress has translated in practice. Studrawa mentioned Petit-Frere among several Buckeyes “having a heck of spring” up front. Fifth-year senior Joshua Alabi, who has been working with Petit-Frere between both tackle spots on the offensive line, has seen the physicality carry over.

Without junior left tackle Thayer Munford, who is out all of spring camp with a lower-back issue, OSU’s practices provide Petit-Frere more reps with the first team. Alabi and fifth-year senior Branden Bowen are also involved, but Petit-Frere’s athleticism is natural. After practice Monday, head coach Ryan Day detailed how he prefers his tackles.

“I think, when you look at linemen nowadays — even all of those guys who were in the (NFL scouting) combine — they all look like athletes,” Day said. “They don’t look like they used to 20 years ago when they were just the big, heavyset guys. They’re all very athletic nowadays and you have to be a good athlete to be a good offensive lineman. … Tackles have to be super athletic.”

Petit-Frere fits the description. With the weight gain finally going in his favor, he powers through the final few weeks of spring camp on the field and maintains close to 300 pounds as the 24/7 monitoring continues. Not only are his teammates, coaches and trainers counting on him — he has high expectations, too.

“I’ve got to master my steps and everything about that. There’s so much to really being prepared and ready to go, so just master my craft.”