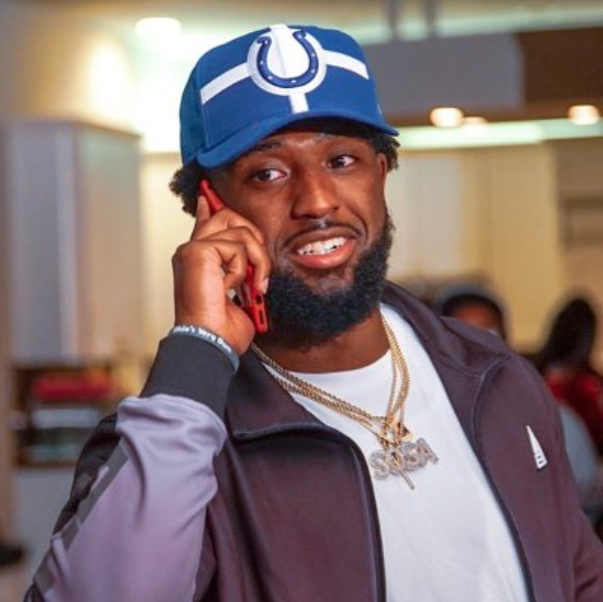 When the Colts went on the clock last Friday with the 59th overall pick in the second round of the 2019 NFL draft, general manager Chris Ballard stood before Indianapolis executives and staffers from the franchise’s war room inside the Indiana Farm Bureau Football Center and kicked off the discussion.

After the Colts traded down with the Cleveland Browns, swapping second-round picks from 46th to 49th and picking up the 144th overall selection in the fifth round, Indianapolis took former TCU defensive end Ben Banogu (6-3, 250) and had options 10 slots later.

As the seven minutes started to tick, Parris Campbell was the first name out of Ballard’s mouth — and the former Ohio State H-back ended up the only one in mind before Colts brass unanimously agreed on the 6-0, 205-pounder.

“We liked Parris all the way through the process,” Ballard said May 1 in an all-access video documenting the NFL draft from Indianapolis. “And (head coach) Frank (Reich) loved him.”

Before the Colts made it official, Indianapolis gathered April 18 and dissected Campbell as a prospect — which led to rave reviews from Reich.

“He’s a threat to score every time he touches the ball,” Reich said. “So then the only character pieces, Chris, is what you and I talked about. Talking to his position coach, (Hartline) said, ‘I hope my son grows up to be exactly like this guy.’ I mean he’s that good of a kid.”

Reich’s opinion was just the tip of the iceberg for the Colts, who studied Campbell closely as a two-year team captain 179 miles east on Interstate 71 in Columbus.

“This guy is a rocket ship — super fast, really good with the ball in his hands.”

Henry made the case for Campbell before Indianapolis went on the clock.

“I’m a sucker for a receiver that has run-after (ability) like that,” Henry said. “And then when you add the speed …”

“You can feel his speed,” Patullo said. “I really like the guy. There’s a couple routes on the tape, too — you know he can physically do it, he just kind of has to be taught and pushed and learn how to do it, but I really like the player.”

Campbell played at Lucas Oil Stadium in Indianapolis twice as OSU won back-to-back Big Ten Championship Games across the 2017 and ’18 campaigns, catching a combined eight passes for 146 yards (16.2 average) and a long of 57 as the Scarlet and Gray defeated Wisconsin 27-21 and Northwestern 45-24.

“You know you’re coming in here with a dynamic offense,” Irsay told Campbell. “And (Indianapolis quarterback Andrew Luck is) ready to get you the football.”

Campbell returned March 2 to Lucas Oil Stadium for the NFL scouting combine and left as a top performer after he blew Indianapolis brass away with his time of 4.31 seconds in the 40-yard dash.

“It was at the combine, remember?” Ballard said to Reich last Friday during a press conference. “His combine workout was incredible, and look, in that offense he was used a primarily a slot only at Ohio State, and the combine you saw him do things that you never really got to see him do just because of the way he used them. I mean as a route runner, his hands — I know Frank got intoxicated with him just running around our turf during the combine. He is an exciting player for us.”

“As a coach, you always feel you so much love the guys you work with that I always think, ‘Hey, we don’t need anybody else. We already got the best guys in the world playing for us,'” Reich said of Indianapolis, which advanced from the AFC Wild Card Round with its 24-7 win over the Houston Texans before the Colts fell 31-13 to the Kansas City Chiefs in the Divisional Round. “And then all of a sudden, now you’re giving us more? This isn’t fair. It’s not going to be fair. And then you get a guy that runs 4.31 and you just say, ‘It’s going to be fun to see these guys work together.'”

"We liked Parris all the way through the process."

"Talking to his position coach, (Brian Hartline) said, 'I hope my son grows up to be exactly like this guy.'"

Everyone with the Indianapolis Colts was sold on Ohio State's Parris Campbell. pic.twitter.com/nnC3itrDgW