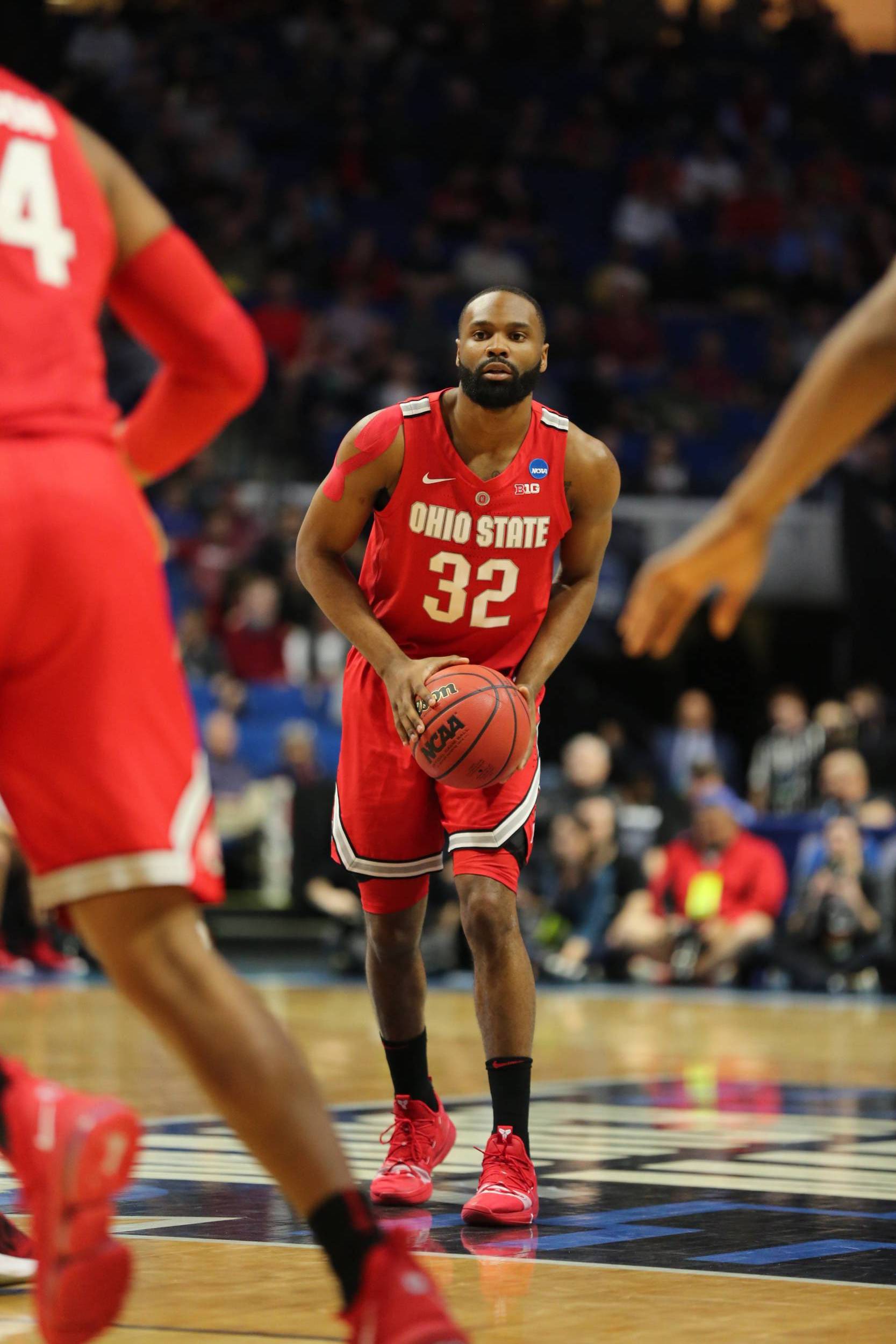 TULSA, Okla. — Ohio State had shown the propensity to stage a rally, whether it was coming back from 23 down in the second half vs. Wisconsin to go to overtime before losing in the regular-season finale, or a 16-0 run that fell just short of beating Michigan State in the Big Ten tournament.

So, a 39-31 halftime deficit to Houston in the second round of the NCAA Tournament Midwest Regional in Tulsa, Okla., on Sunday didn’t seem daunting.

When the Buckeyes pulled to within five things were looking up, but the Cougars were too strong, too quick and too experienced for the Buckeyes and ended OSU’s season with a 74-59 victory.

“We were a couple of stops away from tying it up, a couple of miscues on my part,” senior guard C.J. Jackson said. “We were right there. I’m definitely proud of that part.”

“Coach just harped on me be confident, take open shots, take good shots and that’s what I did,” he said. “My teammates really uplifted me after the last game, just telling me be confident and be who I have been all year. Credit to them and credit to the great coaching staff for instilling confidence in me when I needed it most.”

Sophomore Kaleb Wesson added 15 points. The center attempted seven shots, six of them were three-pointers, making two. He had three shots in the second half.

“They work hard on their defense and it shows,” Wesson said.

Even though the Buckeyes were the 11-seed and the Cougars (33-3) a three-seed, the loss was tough to take.

The Buckeyes went through the ups of a 12-1 start when a young team wasn’t expected to make a repeat trip to the NCAAs, to losing five games in a row – the Buckeyes’ longest skid in 21 years – to losing three games with Wesson suspended to end the regular season. It took a  win over Indiana in the Big Ten tournament to earn an NCAA  bid.

The Cougars increased its halftime lead to 49-39 before Jackson scored five straight to draw within 49-44 with 11:44 remaining. OSU hung around and trailed 52-47 before a pair of buckets by Houston made it 56-47 with 8:24 to go and the Cougars methodically pulled away from there and were up 64-53 for the under-4 timeout with 3:42 to play.

“They’re a fast team. They got into transition a lot. They got to their spots,” sophomore Musa Jallow said. “Nothing really surprised us. We knew how athletic they were, how they kept up on us defensively.”

OSU went 8:17 without a field – all nine points during the stretch were from the line – until Wesson scored with 3:27 left to make it 64-55. He was fouled on the play but missed the free throw.

Even then, the Buckeyes remained confident.

“It was their night. Just say, that. It was their night,” freshman Luther Mohammad said. “No matter what, we’re always going to be confident coming back, playing our hardest until the clock hits zero.”

Holtmann said the Cougars made it difficult to get back into the game.

“We had trouble guarding the ball,” he said. “Their senior (Galen Robinson) made some really important plays when they needed it and we felt like we were getting it right there where it was a one-possession game and they would come up with a loose ball or rebound, whatever the case may be.

Houston’s defense did a god job keeping Wesson away from the bucket and their rotation of big men helped give the Cougars a 34-12 advantage in the paint.

“Miscommunication in our defense at times, including myself,” Woods said. “They just exploited our defense. They got more inside buckets than we did.”

He and Houston’s DeJon Jarreau were issued a technical for a dust-up at the halftime buzzer that had both teams gathering on the floor.

“Heated battles, heated game,” Woods said. “Words were exchanged and me and him got a tech.”

“They played one heck of a game and it showed,” he said. “They played great and they competed, they got here and every team is good in the NCAA tournament. We just have to give our hats off to a great program and their coach is doing a great job.”

Wesson said that’s the way the Buckeyes have played,

Holtmann singled out the three seniors – Jackson, Woods and Joey Lane – for their leadership in getting the Buckeyes into the NCAA Tournament.

“You have three tremendous people who have all been here in varying fashions,” he said. “C.J. three years, Joey Lane four years and Keyshawn Woods a year, and they have left a major imprint on this program. You hate it for those three. It’s extremely disappointing for those three, but also, it’s been a tremendous group to coach.

“I don’t know that I’ve ever been a part of a team where we faced as many challenges and had a group come through on the other end in such a positive way. It just really speaks to the quality of our players and the quality of people they are. And obviously as a coach you would love for them to experience what the second weekend is like, you’d love that for your seniors, but I couldn’t be more proud of this group.”