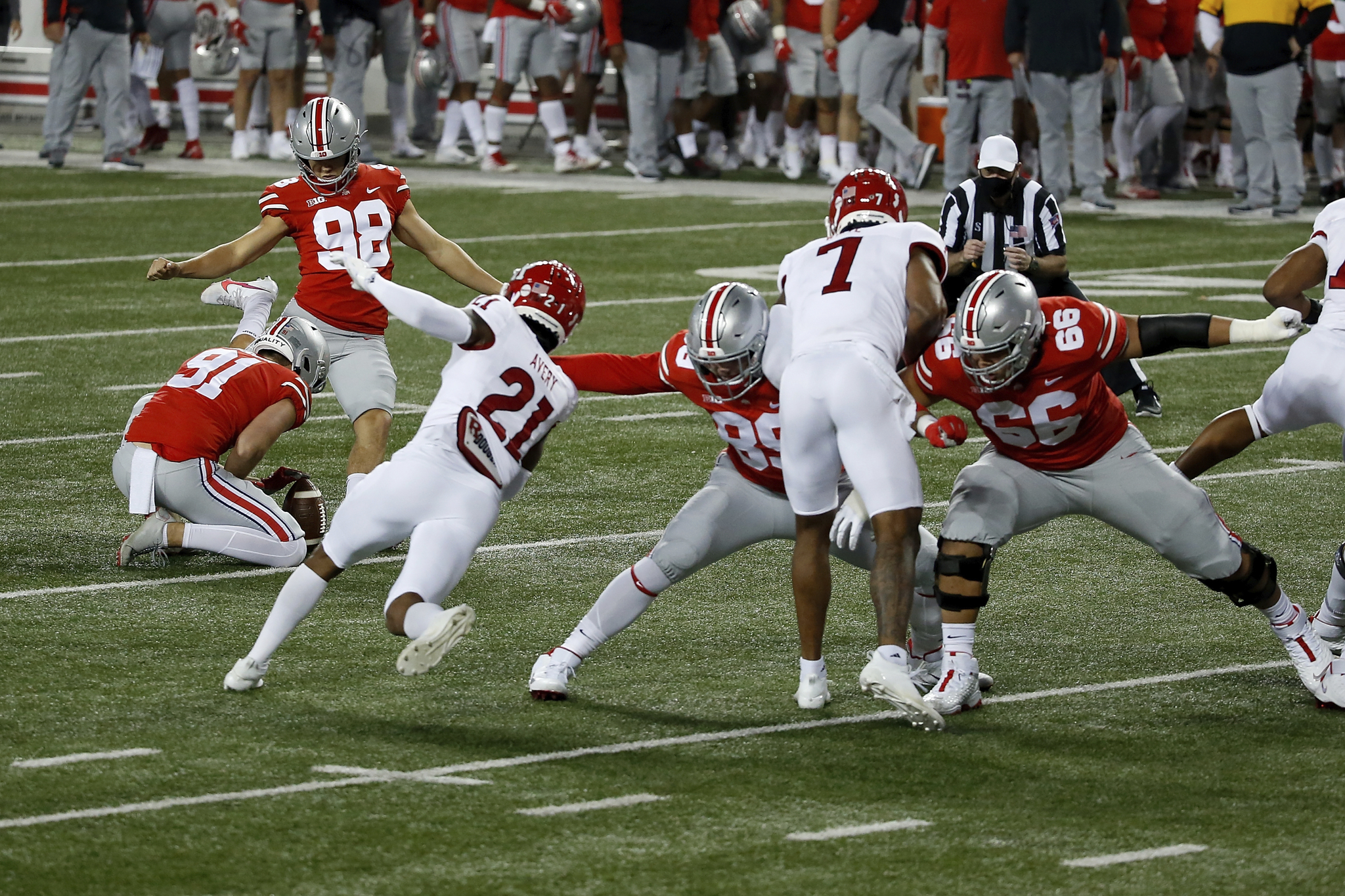 With Ohio State into fall camp and welcoming reporters back into the Woody Hayes Athletic Center to talk to coaches for the first time since early 2020, Buckeye Sports Bulletin is jumping back into the preview game with position-by-position looks at the team ahead of media availabilities with the respective position coaches. Today, special teams coordinator Parker Fleming and several specialists will take center stage.

1. Is there a kicker that Ohio State can trust?

If a very small sample size from the 2020 season and the 2021 spring game (they usually aren’t), Ohio State is without an obvious answer to replace long-time starter Blake Haubeil, who graduated after the 2020 campaign and signed on with the Tennessee Titans this offseason. The New York native wasn’t perfect in his time with the Buckeyes, but he hit all 146 of his career extra point attempts and put up a respectable 28/35 total on field goal tries in three seasons as a starter, capped by a 5-of-7 kicking performance in his final season.

Again, not quite Mike Nugent numbers, but certainly a positive for the team at a position that had found itself in shaky water for years prior to Haubeil’s arrival.

Although you cannot likely take much from the 2020 season or the 2021 spring game for Cincinnati native Jake Seibert – who entered the offseason as the presumed favorite – those numbers (1-of-2 kicking in 2020, two missed field goals in the spring game) in conjunction with the arrival of North Carolina graduate transfer Noah Ruggles paint a somewhat troubling picture of Seibert’s development. Dominic DiMaccio has been the lone kickoff specialist during what media has seen of fall camp, making it fairly safe to assume that Ruggles is in Columbus either as insurance for or as the direct replacement of Seibert in that kicker spot. Whether either man is ready for the role, though, won’t be answered until the Buckeyes trot one out onto the field for the first time this season.

“It’s a competition, it always is – and we’ll always play the best player at every position,” special teams coordinator Parker Fleming said. “Jake kicked last year. I don’t know if we expected him to, but there’s a lot of situations where he went in and performed really well. He kicked in the national championship game, so he’s not a new player.”

2. Can Jesse Mirco pick up where Drue Chrisman left off?

Punters may not face quite the pressure that kickers do, but they’ve been just as important for the Buckeyes in recent seasons, and the stalwart in that spot has departed from Columbus as well with Drue Chrisman’s graduation after four very strong seasons as the Buckeye punter. Like his counterpart, Chrisman’s production won’t likely be easy for Ohio State to replace, with a 44.0 yards per punt average for his career that he managed to top as a senior, averaging 45 yards per punt, despite frequently being asked to pin opponents deep into their own territory.

Unlike at the kicker spot, though, there’s no real battle to replace Chrisman. Australian freshman Jesse Mirco was recruited to replace him in his first season in town, giving Ohio State another four seasons of stable punting. However, he too struggled mightily in the very small spring sample, averaging just 33.8 yards per punt and shaking a pair of punts that netted less than 30 yards. Walk-on Michael O’Shaughnessy has served as Mirco’s primary competition throughout camp, but if the Aussie isn’t prepared to play, Ohio State may be without a kicker and a punter that it feels comfortable in relying on.

Fleming, however, was confident in both positions back in the spring.

“(Mirco)’s development and Jake’s development have been really good,” Fleming said. “Had a great winter to get stronger and work through tough things. There’s a lot of things that specialists need, physically, mentally, all that, getting with the team and going through drills. … That’s been really good.

“I think their development this spring has been key. They’re going to have to continue to develop through the summer and into fall camp to really maximize where they are.”

3. Is this the year that Ohio State has a capable return game?

Then you have the return game – a bit less dire but still a frequent talking point among Ohio State fans and media alike. It’s been years since Ohio State has fielded a consistent big-play threat at either kick or punt returner spots, oscillating seemingly at random between hyper-stable options like K.J. Hill and C.J. Saunders and high risk, high reward players like Demario McCall and Jalin Marshall.

The 2020 campaign was a bit of a combination of the two, as Ohio State asked McCall to return kicks (he averaged just 15.6 yards per return but only got five opportunities) and the duo of Garrett Wilson and Jaxon Smith-Njigba to field punts. Wilson was the most explosive punt returner that Ohio State has had since at least Marshall, but he still averaged just 7.3 yards per return and hasn’t been practicing much in that spot this fall – largely because Ohio State can ill-afford an injury to one of its two best receivers, let alone one sustained on a special teams play.

With McCall back for his sixth season with the Buckeyes this fall, Ohio State has the option to give him one more shot, in hopes that his playmaking ability can finally shine on special teams – while outweighing his troubles in fielding those kicks and punts. From what media has seen, though, it seems that he’ll likely be remaining as the kickoff specialist, with freshmen Emeka Egbuka, Evan Pryor and TreVeyon Henderson fielding punts during a brief media practice availability earlier this month. All three certainly look like solid options, but Henderson is the fastest of the bunch and could provide the spark that Ohio State needs to finally kick its return game into a higher gear.

4. Is Parker Fleming the guy for this job?

This is more esoteric than the other questions but equally pressing, as is always the case with a position coach. This is Fleming’s first full-time job in college football exclusively as a special teams coach after two years as a quality control coach for the Buckeyes in the specialists’ room. He’s been a full-time assistant before, serving as a co-offensive coordinator and quarterbacks coach at Texas State – a job he was promoted to after working as Texas State’s wide receivers and special teams coach the year prior.

Beyond that, though, the resume is sparse. He’s spent nearly as much time as an Ohio State quality control coach as he has coaching anywhere else at the collegiate level, and his experience with special teams is almost exclusively limited to his time in Columbus, which he openly admitted during his first meeting with Columbus media.

It’s obvious that head coach Ryan Day likes him, promoting him to his current role after moving former coordinator Matt Barnes into the secondary coach job, but it’s hard to put together an especially compelling case for his qualification beyond Day’s evaluation on him. The Buckeye head coach hasn’t frequently missed on hires yet, so perhaps that’s more than enough, but this special teams set-up – replacing two vets – would be a difficult task for an experienced coordinator. Can a brand new one navigate this choppy terrain for a program with very little patience for unforced errors?