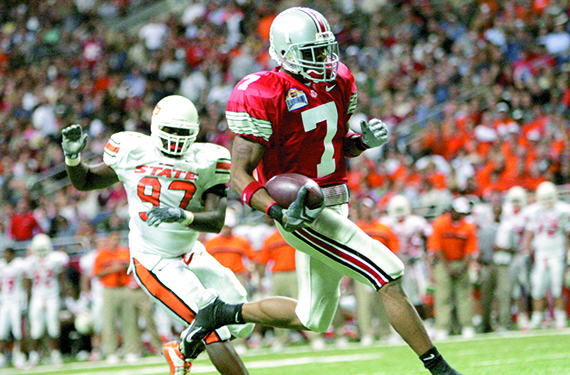 Former Ohio State wide receiver Ted Ginn Jr. announced Friday that he would be retiring from the NFL after a 14-year professional career.

In his time at the pro levels, Ginn, who is now 36 years old, played 193 total games across six different teams, finishing with 412 receptions for 5,742 yards and 33 touchdowns. The former No. 9 overall pick in the 2007 NFL Draft had a strong start to his career with the Miami Dolphins, hauling in 56 catches for 790 yards and two touchdowns in his second season. Both the catches and yards ended as career-highs.

His best span of seasons came from 2015-2017, the first two of which were with the Carolina Panthers and the last of which was with the New Orleans Saints. Ginn broke 700 receiving yards in each of those seasons, including in 2015 when he had 44 catches for 739 yards and a career-high 10 touchdowns.

Ginn was a part of two teams that made it to the Super Bowl, but neither of those teams – the 2012 San Francisco 49ers and 2015 Carolina Panthers – could finish the job, falling to the Baltimore Ravens and Denver Broncos, respectively.

While with the Buckeyes, Ginn made an impact throughout the 2004, 2005 and 2006 seasons. In his freshman season, the former five-star out of Cleveland Glenville shone on special teams, returning four punts for touchdowns while also bringing in 25 catches for 359 yards and two touchdowns.

Ginn continued to make plays in the return game, adding a punt and kick return touchdown in both of his final two seasons. Where he stepped up, though, was as a receiver, totaling 110 catches for 1,584 yards and 13 touchdowns in his sophomore and junior campaigns.