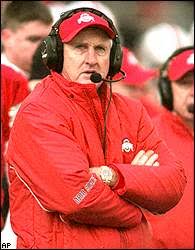 Ohio State historian Jack Park has had experiences with a handful of the Buckeyes former head football coaches, and that includes John Cooper.

Cooper started at Ohio State in the 1988 season after his time at Arizona State and ultimately finished with a 111-43-4 record in 13 seasons with the Buckeyes.

Park discussed what he remembers about Cooper’s tenure at Ohio State, including his stretch of dominant teams in the 1990s, in Buckeye Sports Bulletin’s annual Interview Issue. Here is an excerpt:

“The thing about John Cooper I remember is the teams from 1995-1998. That’s about as great of a four years of football as Ohio State’s ever played. Never quite won a national title, but the players he had over that period of time, the Bobby Hoyings, the Mike Vrabels, the Ryan Millers, the Luke Fickells, the Shawn Springs. Eddie George won the Heisman there, you could go on and on and on. Cooper was probably as good a recruiter as Ohio State’s ever had, maybe up until now, and we’re doing pretty well now.

“But he was one of the greatest recruiters of all time. I think it took a little while to get to know John. He was a guy that gave these players a lot of leeway in what they did, maybe off the field, maybe sometimes a little bit too much. He was one of the most media friendly coaches of all time. After practice, you can go in and interview almost any one of the players you wanted to as long as the player wanted to interview with you. It was pretty much an open house that way with John, which I always really respected.

“The other thing I think about with John, his last year was 2000, he was let go, but he has stayed in the Columbus community. He has contributed tremendously to so many social events and charity events over the years, and a lot of people don’t know this, but he took a lot of players to the hospitals after practice to visit kids that had serious medical conditions.

“John’s just a really good guy, he’s a really good person, and I’m a pretty close friends with John, we don’t live very far apart here. I haven’t seen him now for probably a year and a half because of the virus, but sometimes we’ve had breakfast together.”