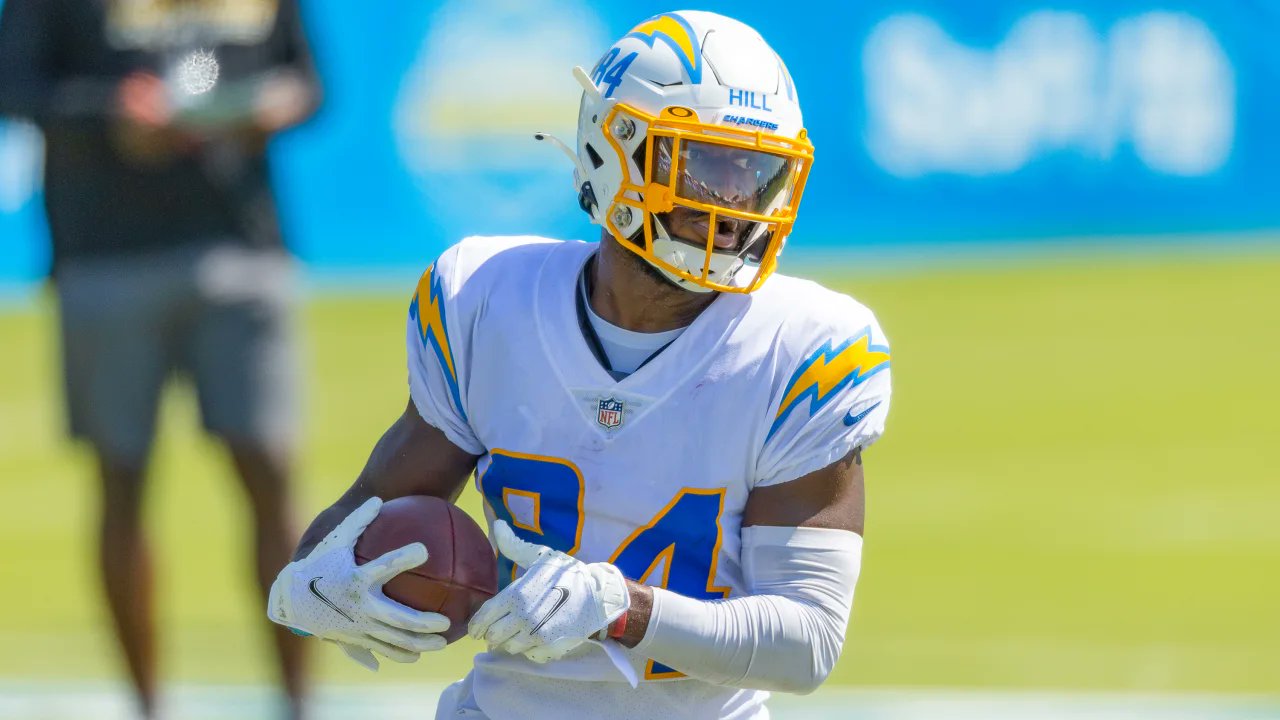 It was considered one of the deepest and most talented wide receiver draft classes in years, and former Ohio State wide receiver K.J. Hill – at 6-0 and 196 pounds – wasn’t one of the biggest, strongest or fastest players in the group.

He was, however, among the most productive and reliable, finishing his college career as the Buckeyes’ all-time receptions leader with 201 catches – including one in 48 straight games, tying Gary Williams’ school record.

“Coming to Ohio State as a young receiver, you see all these great names, and for my name to be at the top of the list is a blessing,” Hill told Buckeye Sports Bulletin in a phone interview on Sept. 12, just one day before his first NFL game against the Cincinnati Bengals.

Yet Hill, who was widely projected to be a mid-round pick in April’s NFL draft, unexpectedly fell to the Los Angeles Chargers with the No. 220 pick in the seventh and final round. He considers it a blessing in disguise, though, especially since he’ll get to use the 32 receivers taken ahead of him as motivation as he begins his professional career.

“It was a dream come true to be drafted,” Hill said. “Growing up and playing football, I always envisioned my name going across that ticker. Seeing it happen was kind of unreal, and when it finally happened, it just brought a lot of tears of joy.

“I’m not sure why I fell. I guess they went off analytics instead of film. I can only control what I can control. The Chargers picked me, and I’m going to give them everything I have. I have a chip on my shoulder to prove I’m better than the other receivers selected ahead of me.”

Being motivated by others is nothing new for Hill, who grew up in Little Rock, Ark., where there’s a long and unfortunate history of drug and gang violence. But rather than fall into the same trap as so many others, he used football as a way to escape the city.

That focus helped Hill become a consensus four-star prospect, a U.S. Army High School All-American and Ohio State’s first-ever signee from the state of Arkansas. But it wasn’t until the Buckeyes hired wide receivers coach Brian Hartline – first in an interim capacity after the Zach Smith investigation in 2018 and then on a full-time basis the following season – that he knew he had a shot at the NFL.

“He’s been there and he’s done it,” Hill said of Hartline, who played for the Buckeyes from 2005-08 and spent seven years in the NFL with the Miami Dolphins and Cleveland Browns. “He’s been in the same shoes I’ve been in and the same shoes I want to be in, so I just took in everything he had to say. He really got me to this point and definitely helped me emerge as a big-time player.

“He had a standard in practice and in walk- throughs, and it translated to the game. It was just instilled into us mentally to take those standards with us everywhere we go.”

Though the coronavirus pandemic limited training camp and cancelled preseason games, Hill’s already made quite the impression on his coaches and teammates.

Quarterback Tyrod Taylor echoed those sentiments that same afternoon when he said Hill has “done a great job of making plays. You can tell he is comfortable at that position.”

“I just take every day like a game,” he said. “I’m trying to prove myself and show that I am a great receiver who can play at a high level. I really think my approach every day in practice helps me stand out.”

Hill has benefited this summer from playing alongside Pro Bowl wide receiver Keenan Allen, who is an exceptional route-runner and as sure-handed as they come. In fact, he sees a lot of similarities between them.

“I watched tape of Keenan when I was in college,” Hill said. “Just watched how crafty he is and kind of took some stuff from his game. Now that I’m with him, I can learn hands-on. I ask him questions all the time. Just having a guy like that in the room helps me elevate my game.”

On the other side of the ball, Hill has been reunited in Los Angeles with former Ohio State defensive end Joey Bosa. Their college careers only briefly overlapped, as Bosa was a junior and Hill a true freshman during the 2015 season, but their prior relationship was evident on their first day in the facility together.

“He gave me a big hug,” Hill said with a laugh. “He had a bunch of advice when I first got here and, really, just said that it was finally great to have a fellow Buckeye on the team.” Interestingly enough, Hill’s first NFL game was against another former teammate in Bengals rookie quarterback Joe Burrow. The two were part of the same recruiting class and remain close to this day, even though Burrow transferred to LSU following their redshirt sophomore seasons.

“Once you’re a Buckeye, you’re always a Buckeye,” Hill said of Burrow, who won the Heisman Trophy and national championship last season and was the No. 1 overall pick in April’s draft. “I wasn’t really surprised that he had the success he had because I know what type of player he is. He shed blood, sweat and tears with us. We used to pile up in his Jeep for 6 a.m. workouts, and even though he took a different path, we know he did what was best for him and his family.”

Of all of his former teammates in the NFL – and it’s worth noting there were a total of 50 Buckeyes on active NFL rosters to begin the season – Hill said he’s most excited to face Las Vegas Raiders cornerback Damon Arnette, who was this year’s 19th overall pick. Both members of Ohio State’s 2015 recruiting class, the two went at it in practice every day for the last five years.

“We’re in the same division and we have to play him twice a year,” Hill said. “Hopefully we get a chance to get some one-on-one work and trash talk like we did when we were at Ohio State. I’m looking forward to that.

“He just has a great mentality. He’s a dog. He’s going to talk his talk, but when it comes to playing, he’s going to back it up. When you go against him, you have to be ready at all times.”

Hill – who fielded a punt and saw 11 snaps on offense in his first game, a 16-13 win in Cincinnati – may not be as vocal as Arnette, more often letting let his play speak for itself. But when asked what kind of goals he has for himself at the next level, he didn’t hold back.

“I’m going to control what I can,” Hill said. “When the ball comes my way, catch it. When I’m on special teams, take advantage of what they give me. But at the end of the day, I just want to be known as one of the best route-runners and best receivers in the NFL.”

This story first appeared in the Sept. 19 edition of Buckeye Sports Bulletin. For four free issues, sign up at the link below. No credit card required: http://www.buckeyesports.com/subscribe-4issue-trial/