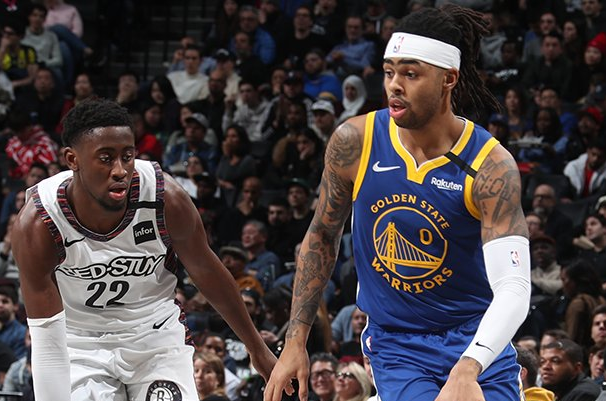 Former Ohio State standout D’Angelo Russell was traded from the Golden State Warriors to the Minnesota Timberwolves, per Adrian Wojnarowski.

Golden State has agreed to trade D'Angelo Russell to Minnesota for a deal that includes Andrew Wiggins, a 2021 protected first-round pick and a 2022 second-round pick, league sources tell ESPN. Warriors will send Jacob Evans and Omari Spellman to Timberwolves too.

The Warriors are also sending Jacob Evans and Omari Spellman to Minnesota, while receiving Andrew Wiggins, a 2021 protected first-round pick and a 2022 second-round pick.

Timberwolves 2021 pick protected to No. 3, and becomes unprotected in 2022, per sources. Minnesota kept pushing for Russell, who it has wanted since summer free agency and finally got the point guard Gerssson Rosas imagined pairing with KAT. https://t.co/kfDNvsdBHX

The Timberwolves 2021 first-round pick is protected through No. 3 and becomes unprotected in 2022 if it lands inside the top three.

In his first season in Golden State, Russell averaged a career high in points per game (23.6) along with 6.2 assists, 3.7 rebounds per game across 33 games for the 12-40 Warriors. The former Buckeye is shooting a career high in three-point percentage (37.4) while averaging a personal best in makes and attempts per game (3.6 of 9.7).

Minnesota also recently acquired former Buckeye Evan Turner in a four-team trade, where the Timberwolves sent another former Buckeye, Keita Bates-Diop to Denver. Whether or not Turner’s contract will be bought out remains to be seen.

The Timberwolves mark the fourth team for Russell, who is in his fifth NBA season. The Warriors initially acquired Russell off his All-Star season in Brooklyn as part of a sign-and-trade deal involving Kevin Durant.

Russell, who was the No. 2 pick overall by the Lakers in the 2015 NBA Draft, will join Karl-Anthony Towns, who was the No. 1 selection by the Timberwolves in that same draft and is a good friend of Russell’s.

The former consensus first-team All-American played just one season at Ohio State, where he led the Buckeyes to the Sweet 16 in 2015.

The Big Ten Freshman of the Year averaged 19.3 points, 5.7 rebounds and 5.0 assists, while shooting 44.9 percent from the field and 41.1 percent from beyond the arc in his lone season in Columbus.