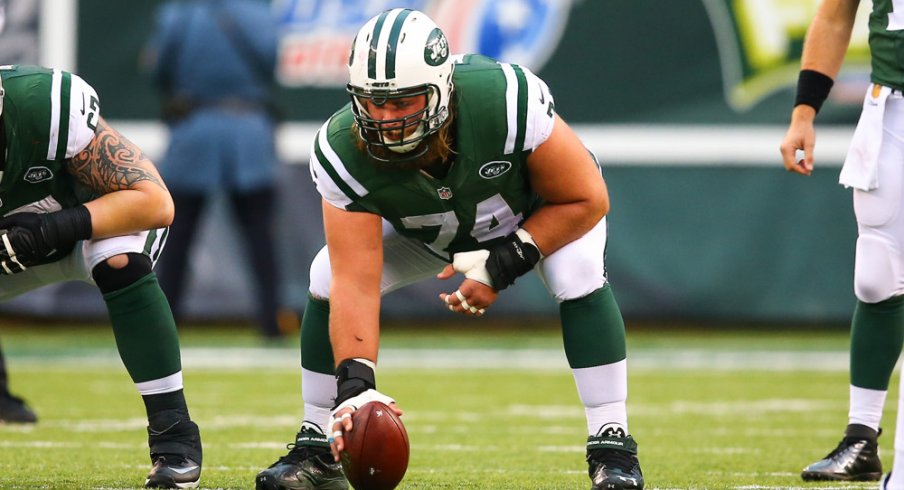 Former Buckeye center Nick Mangold has a memorable appearance. His full face, thick beard and long blonde hair are the most notable qualities — the same ones that will be on display when the New York Jets induct him into the organization’s Ring of Honor this fall.

The Jets announced on Thursday that Mangold would be one of three franchise legends to be inducted into the Ring of Honor. He will accompany former New York offensive tackle D’Brickashaw Ferguson and former cornerback Darelle Revis into the exclusive club.

Mangold learned the news on his podcast called “The Exchange” with former Jets quarterback Mark Sanchez. Jets chairman Woody Johnson, with Mangold sitting to his left and Ferguson and Revis connected via Zoom, told them they would join the Ring of Honor at halftime of the team’s game against the Cincinnati Bengals on Sept. 25.

“This is a shock,” Mangold said. “Thank you so much. This is awesome and amazing since it’s with two of my guys. It’s definitely an honor and I can’t wait to start the celebrations.”

Mangold earned first-team All-Pro honors twice during his 11 NFL seasons — all with the New York Jets. He also was named to seven Pro Bowls. The Jets chose Mangold with the No. 29 overall pick in the 2006 NFL Draft after selecting Ferguson with the No. 4 overall selection. It marked the first time a team drafted two offensive linemen in the first round since 1975 when the Rams took Dennis Harrah and Doug Fence. Mangold was the only center taken in the first round and the highest pick among Buckeye centers since Gordon Appleby went 26th overall in 1945.

At Ohio State, Mangold was a three-year starter that rated on par with former All-American and 2001 Rimington Trophy winner LeCharles Bentley, according to then-Ohio State offensive line coach Jim Bollman.

“Most guys you get out of high school have to be taught how to play center, but (Mangold) already knew the mechanics of the position,” Bollman said. “That was a big, big advantage.”

Mangold was Ohio State’s most durable lineman in his four seasons and logged over 300 minutes of action in each of his last three years. He was named honorable mention All-Big Ten Conference recognition in 2004 and earned All-Big Ten second team and All-American honors in 2005. Mangold finished his career with 33 starts in 45 games.