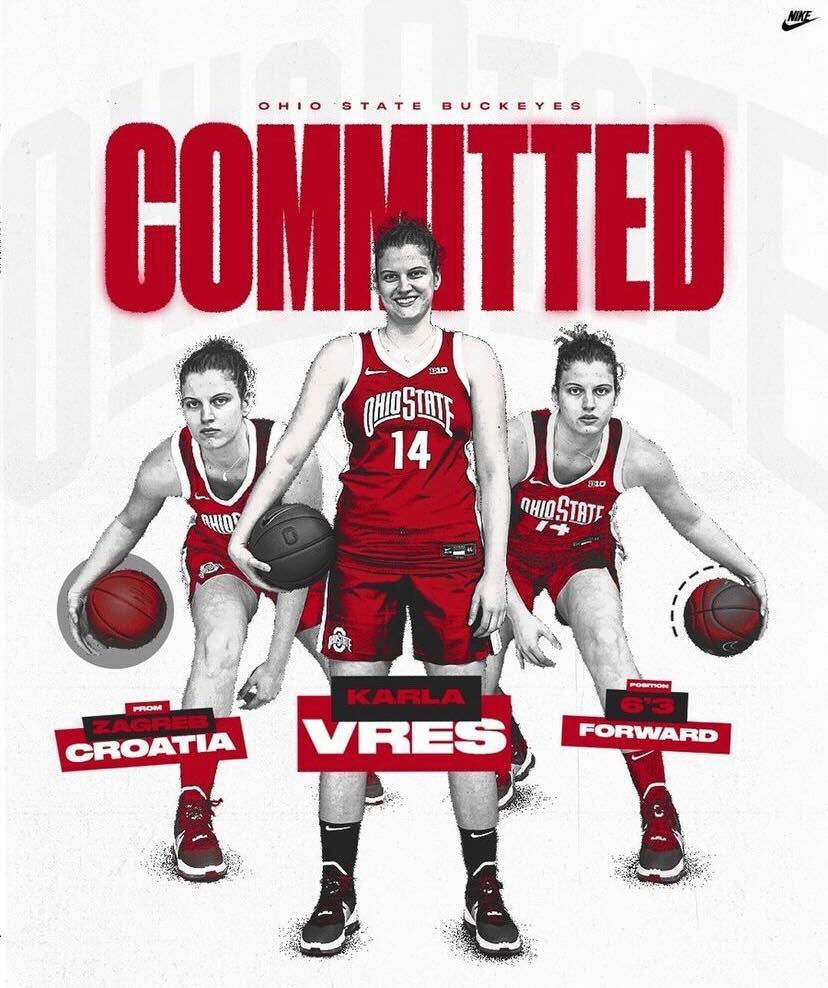 Ohio State’s guard-heavy women’s basketball roster has gained some talent at the forward spot, as former American University forward Karla Vreš announced her transfer to Ohio State in an Instagram post on May 10.

A native of Zagreb, Croatia, she was a three-time silver medalist and three-time gold medalist while playing in her home country. She moved to Sweden at 15 and has played for Swedish First League, Visby Basket, Brahe Basket, AIK Basket and Alvik Basket, according to her American University bio.

After three seasons with American – which participates in the Patriot League and includes teams such as Army, Boston, Bucknell and Navy – she announced her entry into the transfer portal in March.

Vreš – listed at 6-3 on American’s roster – appeared sparingly in her first season, playing in 24 games and averaging just 7.6 minutes, according to Her Hoop Stats. She took a jump in her sophomore season, starting seven games in American’s pandemic-shortened schedule and playing 18.8 minutes per game while averaging 8.6 points, 2.4 rebounds and 1.4 blocks per contest.

She saw her playing time dwindle this past season, averaging just 11.4 minutes per game and starting in just two contests. The highlight of her season came in one of those starts, where she played nearly 30 minutes and scored 13 points on 5-of-12 shooting while pulling down four rebounds in an overtime loss at Army.

American University won the Patriot League this past season and made an appearance in the NCAA tournament for the third time in program history. The Eagles, a No. 14 seed, fell to No. 3 Michigan in the first round.

Vreš’ arrival is a pivotal one for an Ohio State roster looking for some additional height. The Buckeyes – who return guards Taylor Mikesell, Jacy Sheldon and Madison Greene – will mostly focus on the production of their backcourt, but they struggled at times last season with a lack of presence around the basket, and Vreš immediately becomes the second-tallest player on the roster behind soon-to-be senior forward Rebeka Mikulášiková.

Ohio State’s talented guard group will likely call for Vreš to play near the basket, but if called upon, she’s also shown an impressive shooting ability, including from the midrange. In her sophomore season, she led the Eagles in shooting from the field (60.3 percent) and beyond the arc (61.9 percent on 13-of-21 shooting)

Though her shooting splits declined last year – just 37.0 percent from the field and misses on all five of her three-point attempts – there is likely hope from Ohio State that she can provide depth at forward behind Mikulasikova while returning to her sophomore form and becoming an additional shooting threat for the Buckeyes.

Listed as a junior on last season’s American roster, Vres likely has two seasons of eligibility remaining for the Buckeyes. Along with the three incoming freshman – Kaia Henderson and Cotie McMahon enrolled early, and Mya Perry will arrive this summer – Vreš’ transfer makes 13 players on scholarship for Ohio State.