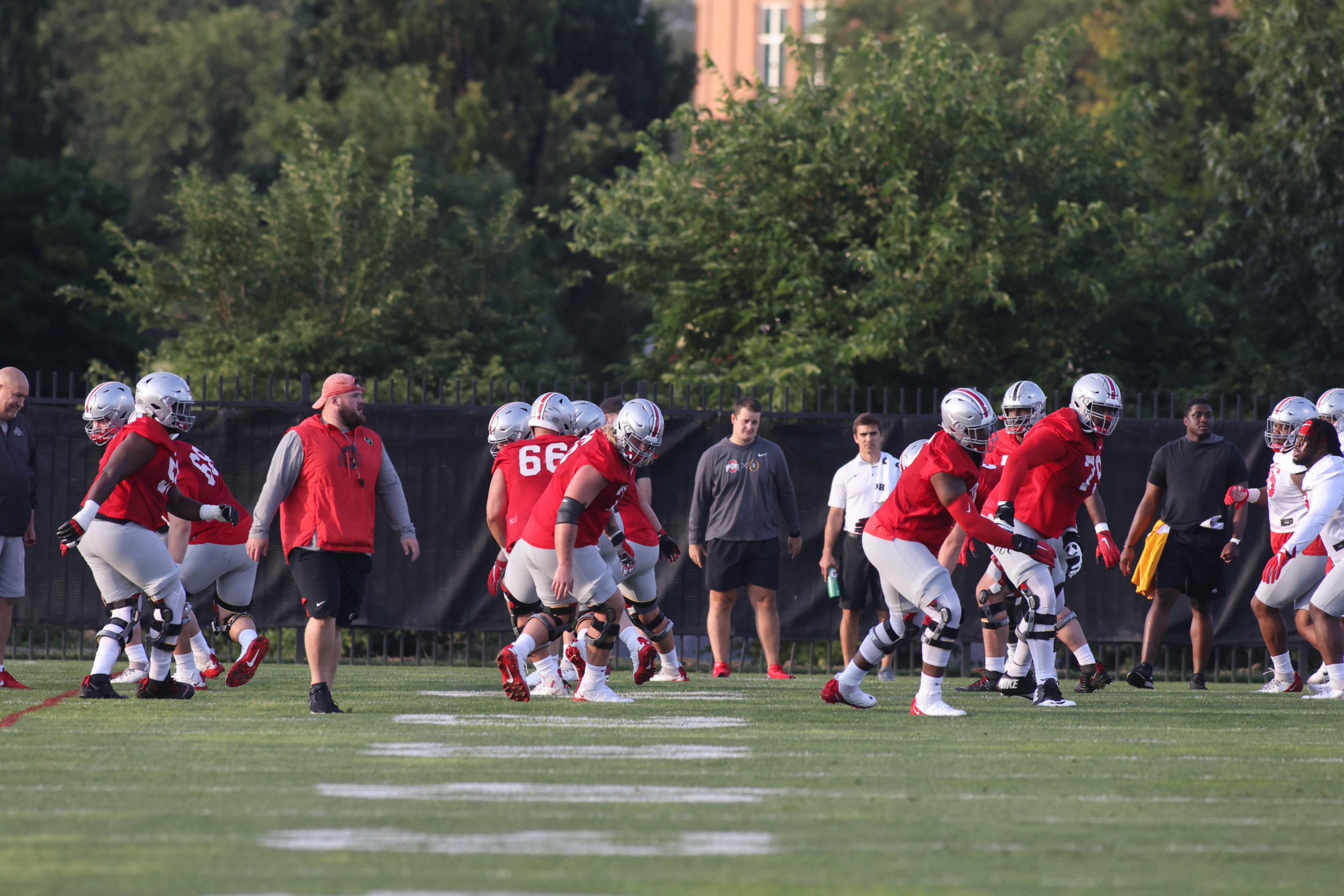 With Ohio State into fall camp and welcoming reporters back into the Woody Hayes Athletic Center to talk to coaches for the first time since early 2020, Buckeye Sports Bulletin is jumping back into the preview game with position-by-position looks at the team ahead of media availabilities with the respective position coaches. Today, offensive line coach Greg Studrawa and several O-linemen will take center stage

1. Is there fire to the Dawand Jones smoke?

As fall camp started, rumors swirled on message boards and social media that Ohio State was looking into working junior offensive tackle Dawand Jones into the mix up front, in hopes of playing its five best linemen. Ohio State worked Jones into the line at guard in 2020 when it could, but the opportunities were few and far between with Harry Miller and Wyatt Davis around, and very few blowouts to work backups into. When he did get to play, the 6-8, 360-pounder impressed, but certainly looked a little big for that guard spot. It’s hard to see him anywhere but tackle at this level because of his size.

That presents a bit of an issue for Ohio State, which already has two of the best tackles in the country in Nicholas Petit-Frere and Thayer Munford. However, the rumor mill churned out word that Ohio State was working Munford in at guard to make room for Jones, moving Petit-Frere over to left tackle to take over for Munford. Media had not yet seen that in open practice periods, but on Tuesday, the starting group held form to the rumors. Petit-Frere lined up at left tackle, next to Munford, with Miller, Paris Johnson Jr. and Jones rounding out the group. It certainly seems as though the four-tackle line is a possibility at this point.

One of three vets on this line, Miller, a junior for Georgia, has frequently been slotted in as the presumed starter at center for these Buckeyes. He was a five-star center out of high school, started at guard last season and looked like the obvious No. 2 behind Josh Myers, filling in when Myers was out against Michigan State. His bonafides are good.

The production, though? That’s more up in the air. Miller started in 2020 but he didn’t exactly star for the Buckeyes, struggling in his pass protection and having a ton of trouble with snaps when he was called on at center. An extra year of development can help just about anybody, and Miller has more than enough talent to be an All-American-caliber lineman for Ohio State, but he needs to prove it before he can be fully penciled in, especially with sophomore Luke Wypler making a strong run at his job throughout this offseason.

3. Is Paris Johnson Jr. ready for a starting role in year two?

The redshirt freshman from Cincinnati Princeton certainly looks the part. Johnson is every bit as big and as built as his fellow starters up front, and has almost gone through the offseason unquestioned as Ohio State’s starter at one of the two guard spots. He absolutely has the talent for it and impressed in a big way at the end of the 2020 season, but there is still at least a bit of a question about getting a second-year player fully ready for a starting role when he’s had just one full, real offseason in town.

4. What does Ohio State do with Matthew Jones?

The odd man out on this starting line certainly looks to be Matthew Jones, especially if Munford’s move to the inside is permanent for the Buckeyes. Jones was very impressive at the end of the season for Ohio State as well and looked to be the replacement for Davis up front at right guard, but that’s very much in question now with the shifting Ohio State is doing and with the rise of players like Josh Fryar and Enokk Vimahi.

Jones’ talent isn’t in question, but it seems that something is holding him back from fully breaking through. If Ohio State wants one true guard in its lineup it seems likely that he would be the guy, but if the big group is the starting five, it’s hard to see much of a role for the New York product.

5. Is this the deepest group in Studrawa’s tenure?

It’s very hard to find any answer but “yes” here. We haven’t seen quite a few of these guys play yet, but the talent and development on this line has been very, very impressive early on in fall camp, and it looks the part on paper more than any group that Studrawa has coached at Ohio State. The second-team of Vimahi, Jones, Luke Wypler, Donovan Jackson and Fryar that Ohio State showed on Tuesday would be a capable starting group at most Big Ten schools, and it’s safe to assume that it won’t see time for Ohio State this season unless there’s a blowout, or an injury. It’s a pretty good spot to be in, especially with a full developmental third group behind the top two. Head coach Ryan Day has praised the depth before, and it seems to be fully justified early on in camp.

“I think we have really good depth,” Day said this spring. “We have a good group in that room. I think Greg Studrawa has done a really good job recruiting. We have different shapes and sizes, have some versatility in there. We have over 20 guys in that room with walk-ons and scholarship guys.

“We have to continue to develop some of the guys in there, and we’ve developed some guys into being good players. It’s fun to see where that’s headed this year, because I think we have a chance to have a really good room.”