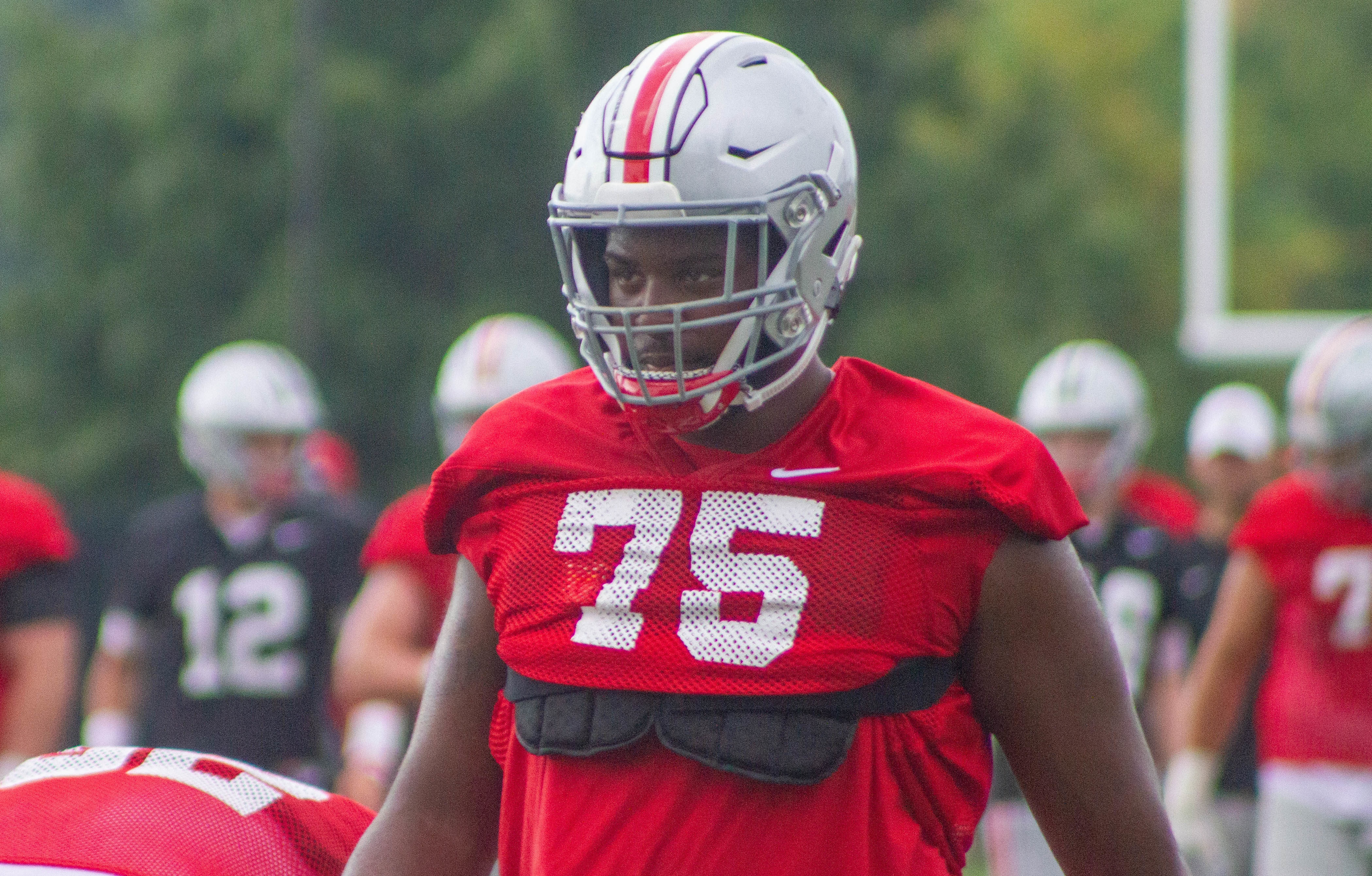 A curious first-team lineup took the field for the Ohio State offensive line at the sixth practice of fall camp Tuesday.

Ohio State offensive line coach Greg Studrawa said that the lineup, which also included junior Harry Miller at center and sophomore Paris Johnson Jr. at right guard, isn’t just a one-off experiment. In fact, it might just be the one that starts the season for the Buckeyes on Sept. 2.

The primary reason for the position shifts was not a lack of options at left guard, but the rapid progression of Jones ahead of his third year in the program, Studrawa said.

“He never took football as serious as he took basketball, so it’s taken some time to develop that,” Studrawa said. “Now his attention span’s different, his attention to detail is different, his want to be great at football is totally different. And the fact is you’ve got a 370-pound man that can move. And when you’re tested against our pass rushers, if you can block them, I don’t think anything during the season is going to be an issue.”

Jones, who is listed at 6-foot-8, 360 pounds on the official Ohio State roster, was just a three-star recruit out of Ben Davis High School in Indianapolis in the class of 2019. However, his physical tools have always been obvious, and his size and boisterous personality have made him a fan favorite.

“A guy that’s that big and athletic and physical, him coming on, how do you not find a place for that guy to play?” Studrawa said.

At center, Studrawa confirmed that Miller is the first-team option for the Buckeyes at this stage in camp. Even though Miller played left guard for most of last season, he backed up Josh Myers at the position as a true freshman in 2019, and started in the middle of the line against Michigan State this past season.

For Petit-Frere and Munford though, the potential changes could be a bit less natural. Still, Studrawa doesn’t seem to think any of them will struggle to make the transition.

“Nick’s played left before, so it’s not much new for him,” Studrawa said. “He was right last side, now he’s left, but not much new for him. And Thayer is a powerful young man that has the ability to play both those spots. And the fact that Dawand’s coming along so well right now gives us the best opportunity to have Thayer move –– if that works out –– and give us the best line.”

The move may seem particularly strange for Munford, who has started at left tackle for the past three years running, and said during the spring that he came back to the program –– in part –– to prove that he’s the best tackle in the country.

But Studrawa said the ability for Munford to switch back and forth will only make him a more valuable prospect at the next level.

“When you’re in the NFL and you can play multiple positions like Billy (Price) and like Pat (Elflein) and like the guys that have gone on now and are signing these big-time contracts because of their flexibility, that makes Thayer a higher draft [pick] to me,” Studrawa said.

Studrawa said that the move was not forced on Munford, and that the fifth-year Buckeye veteran actually pointed out to him how well Jones had been playing, and suggested that he could slide over if it was best for the team.

This lineup isn’t set in stone just yet, as the Buckeyes will continue to experiment with other looks, but Studrawa said things will begin to be solidified after the first scrimmage of camp.