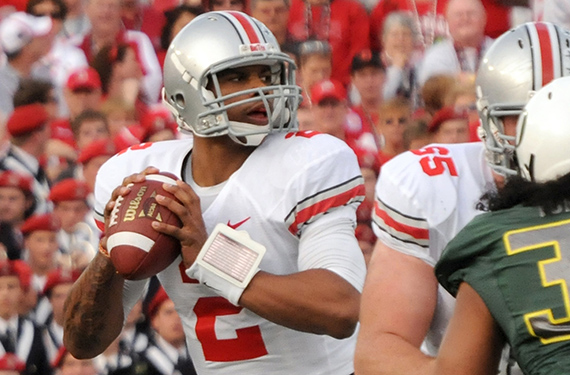 After Ohio passed a law allowing student-athletes to benefit from their name, image and likeness, five former Ohio State players are seeking redemption for their past violations.

“Now that fundamental right has been granted to a new generation of athletes,” the players said in a statement. “Now that they finally have the freedom to share in some of the millions of dollars in revenue they generate for their coaches, their institutions, their conferences, and the NCAA as a whole, we would like to see our hard-won accomplishments reinstated.”

The 2010 Ohio State football team earned a 12-1 record, won a Big Ten Championship in the regular season and won a Sugar Bowl. Pryor became a top-five career all-time passer at Ohio State, Posey a top-five career receiver, Herron a top 10 career rusher and Mike Adams an All-American, only for the university to wipe their accomplishments from the record books due to NCAA violations.

“We are calling for our school records and legacy to be restored so that Buckeye Nation can look at us with the same love and fondness that we’ve always had for them,” the players said.

Jim Tressel, the embattled coach of said team, has come out in support of the NIL rights bills as well in recent days.

“I think it’s just a matter of time that it was going to happen that the wealth was going to to be spread,” Tressel said, according to Marcus Hartman. “You know, hindsight is 20/20. I’m not sure as the interest and the revenue escalated in the last 30 years if we did as good a job as we could have perhaps to involve more people into the benefit of that. And all of a sudden, here they are. It’s gonna be an adjustment, and I think it was gonna come.”

On Dec. 23, 2010, Ohio State suspended the five players for the first five games of the 2011 season after the NCAA found that the players violated a policy prohibiting them from using their name, image and likeness to receive benefits. The players sold memorabilia and awards for improper benefits, including tattoos.

The university allowed the players to participate in the 2011 All-State Sugar Bowl against Arkansas. The Buckeyes defeated the Razorbacks 31-26, receiving significant contributions from the five players.

Pryor threw for 221 yards, ran for 115 yards and scored two touchdowns. Herron added 87 rushing yards and a touchdown, Posey caught a touchdown pass and Thomas clinched the game, intercepting then-Arkansas quarterback Ryan Mallett in one of the game’s final plays.

On March 8, 2010, a Yahoo! Sports story accused then-Ohio State head coach Tressel knew the players violated NCAA rules more than eight months before school officials said they were made aware of the transactions. The university suspended Tressel for the first two games of the 2011 season and fined him $250,000.

Later that month, on March 17, 2010, the NCAA upheld the five-game suspensions for the players. In a move of solidarity, Tressel asked athletic director Gene Smith to increase his suspension to five games, a request Smith obliges.

On July 8, 2010, Ohio State responded to the NCAA allegations, vacating all 12 wins from the 2010-2011 season, including the Sugar Bowl win against Arkansas. The university self-imposed a two-year probation on its football program, but did not include loss of scholarship or a ban from bowl games.

“Although [restoring the team’s accomplishments] could never undo what we and our families endured for breaking rules that shouldn’t have existed in the first place, we believe reinstating and acknowledging the accomplishments of ourselves and our teammates would be a huge step in the right direction.” the players said.