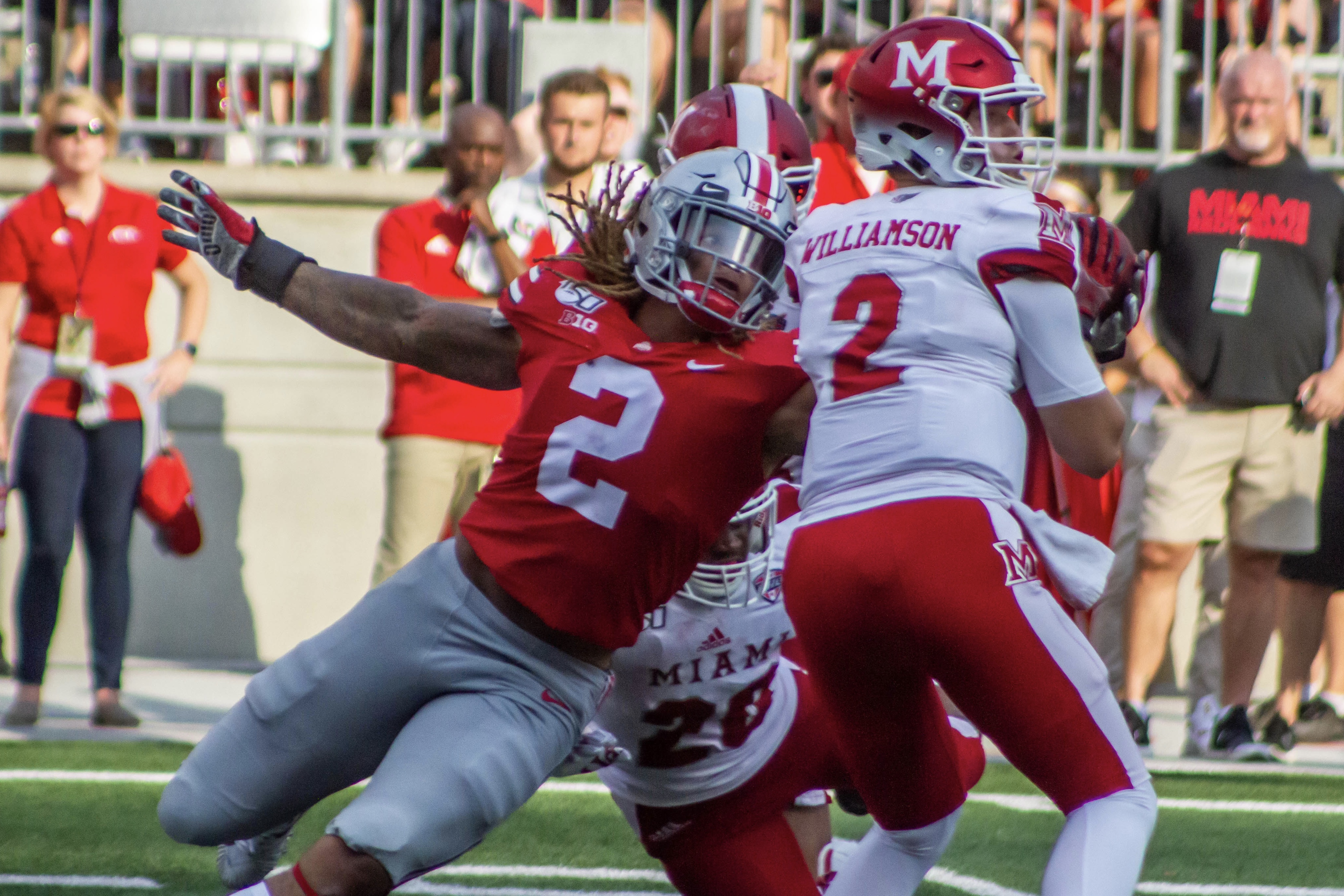 For the first time in Ohio State’s 2019 season, the Buckeyes got punched in the mouth a bit on Saturday. While Ohio State obviously took care of the visiting Miami RedHawks in emphatic fashion, it looked like the Buckeyes were truly caught off guard early in the game when Miami jumped all over them with quick hit passes and RPOs. The Buckeyes looked at least slightly underprepared for the first time this season.

They, of course, responded. After about two and a half drives of a Miami attack looking competent and even dangerous, Ohio State’s defense made a few changes, and just like that, the game was over.

That probably doesn’t happen last season, with the defensive staff the Buckeyes had accumulated. That group had a bit of a tendency to lock into one game plan all season long, and in games like the loss to Purdue, or the close win against Maryland, Ohio State struggled greatly with what was essentially the same thing, all game long.

A year later, things have changed. Ohio State’s new staff, led by Greg Mattison and Jeff Hafley, proved its ability to think on its feet, adapt to what Miami was doing, and ultimately, shut the RedHawks down before things ever got serious. How did they do it?

Well, there were two primary changes that Ohio State made. The first was schematic.

Ohio State started the game in what is functionally its base defense: 4-3, cover 3 zone. The Buckeyes looked as though they expected a much slower, more power oriented Miami attack, which would make sense given that Miami usually does just that. Instead, the RedHawks came prepared, and ready to attack that zone with misdirection and RPO. That showed up quite a bit on the first drive, and even on the first play.

Miami shows a heavy look here, and fakes the run, bringing eight Ohio State defenders including safety Shaun Wade into the box to defend that handoff. The handoff never comes, and quarterback Brett Gabbert instead looks to hit his receiver quickly underneath. Because Jeff Okudah is already dropping into a deep third zone, and the linebackers have left their passing lane responsibilities, the pass underneath is wide open for a solid gain.

A few plays later, Miami has another play designed to beat cover 3, this time down the field a bit. The outside corners, about 15 yards out have a tendency to be pretty open if they can be attacked quickly against this kind of defense, and because Pete Werner makes a slightly wrong read here, Jeff Okudah is again left out to dry as he attempts to drop into his deep zone, and Miami only misses a big play because of a bad throw.

On third and long of this same set of downs, Miami again looks to the intermediate outside, and is again able to pick on the bailing Okudah. To set this up, Miami sends the slot receiver deep across the middle to draw Shaun Wade in, which can be marked down as a Wade mistake. This may just be remnants of his time as a press corner, but his responsibility here is in a zone closer to the sideline. He may not make the play here if he’s there, but he could make this a more difficult throw.

It wasn’t just an aerial assault early from Miami. Using the same misdirection ideology that they deployed in the passing game, the RedHawks were able to gash Ohio State early on the ground because they used Ohio State’s aggressiveness against it. Here, Miami fakes inside just long enough to hold the defensive end and bring the linebackers in, which creates room outside for an easy pitch to the halfback. Again, this is more of a discipline thing than a scheme thing, but Miami did enter this game with essentially the best possible strategy to beat Ohio State’s defense.

A few plays later, Ohio State suffers a similar fate, with too much pressure inside and not enough on the exterior. Miami does a great job of isolating Haskell Garrett who, while talented, isn’t a guy Ohio State should want defending laterally. The linebackers, namely Pete Werner, have to be able to help their lineman here.

With Miami now firmly in Ohio State territory, it’s back to the pass off of misdirection, and more pretty easy success. Pretty much everyone but Tuf Borland bites hard on the two fakes, and Borland isn’t in good enough position to clog up the passing lane to an open receiver across the middle. Malik Harrison may have been responsible for the back here, in which case, Borland needs to drop into his zone much quicker.

After Miami settled for a field goal on that drive, Ohio State made its changes. The first was to scheme. The Buckeyes started to show a little bit more press on the outside, with linebackers zones still there across the middle to clog lanes. This allows the corners to play those underneath routes tighter, and look to force turnovers.

They also changed up some personnel. Namely, they shifted to a much faster linebacker group, moving Brendon White in for Pete Werner, and Baron Browning in for Tuf Borland. This wasn’t an every play adjustment, but it was there, and it did its job almost immediately.

Here, Browning is able to use his speed to keep Gabbert contained, and ultimately pick up a TFL. He doesn’t do a perfect job here, but his coverage is good enough that he’s still in position to make a play on the quarterback.

Browning does pretty much the same thing here, though on a run rather than a pass. He’s such a good athlete, and that athletic ability allows him to make plays that no one else at that linebacker spot really can.

To open the second quarter, the scheme shift shows up. Baron Browning and Teradja Mitchell both fill the passing lane, and Jeff Okudah takes advantage with the interception. Just like Ohio State wanted, the changes force a turnover almost immediately.

A few drives later, they get another one, this time from Chase Young. There really isn’t much to say schematically here. The coverage is good, which gives Young time, but ultimately, this is the best player in the country just doing what he does.

Then near the end of the quarter, he does it again. Miami, and essentially any Ohio State opponent this year can scheme all they want, draw up the perfect game plan, and ultimately, Ohio State is still going to have this. As long as the coverage underneath is solid against the quick hitters Ohio State saw on Saturday, which it was in the final three quarters, Chase Young and the rest of this defensive line make the Buckeyes nearly impossible to beat for four quarters. If Young has any time at all to get into the backfield, he’s going to do it all day long.

That’s really the best way to define Ohio State’s entire defense, and this performance against Miami. The Buckeyes started off cold, unprepared, and undisciplined. It looked like they were expecting something else than what they got, and that’ll hurt against any team with a pulse. However, despite that start, the Buckeyes still had the talent to keep the game tight until they were able to figure it out. That’s a luxury very few teams have.

With that luxury, Ohio State’s defensive staff is able to make changes without concerns of a complete collapse. The baseline performance on this defense is so high that a bad showing amounts to a field goal in one quarter against Miami. Then, after the proper adjustments are made, the Buckeyes are able to completely take over. Until Ohio State plays a team that can truly take advantage with a strategic advantage, the defense is in no real danger because there will always be a grace period for early game fixes.

With that said, the beginning of this game should at least give pause to Ohio State’s staff, and frankly, that’s a good thing. There should be questions about the viability of three linebackers, especially if those three are Werner, Borland and Harrison, against teams that like to run the RPO. There should be questions about how Ohio State’s zone look would fare against a team like Nebraska.

Unlike last season, those questions are being asked by the staff, in the middle of games. Ohio State is self-correcting before things get bad, rather than after.