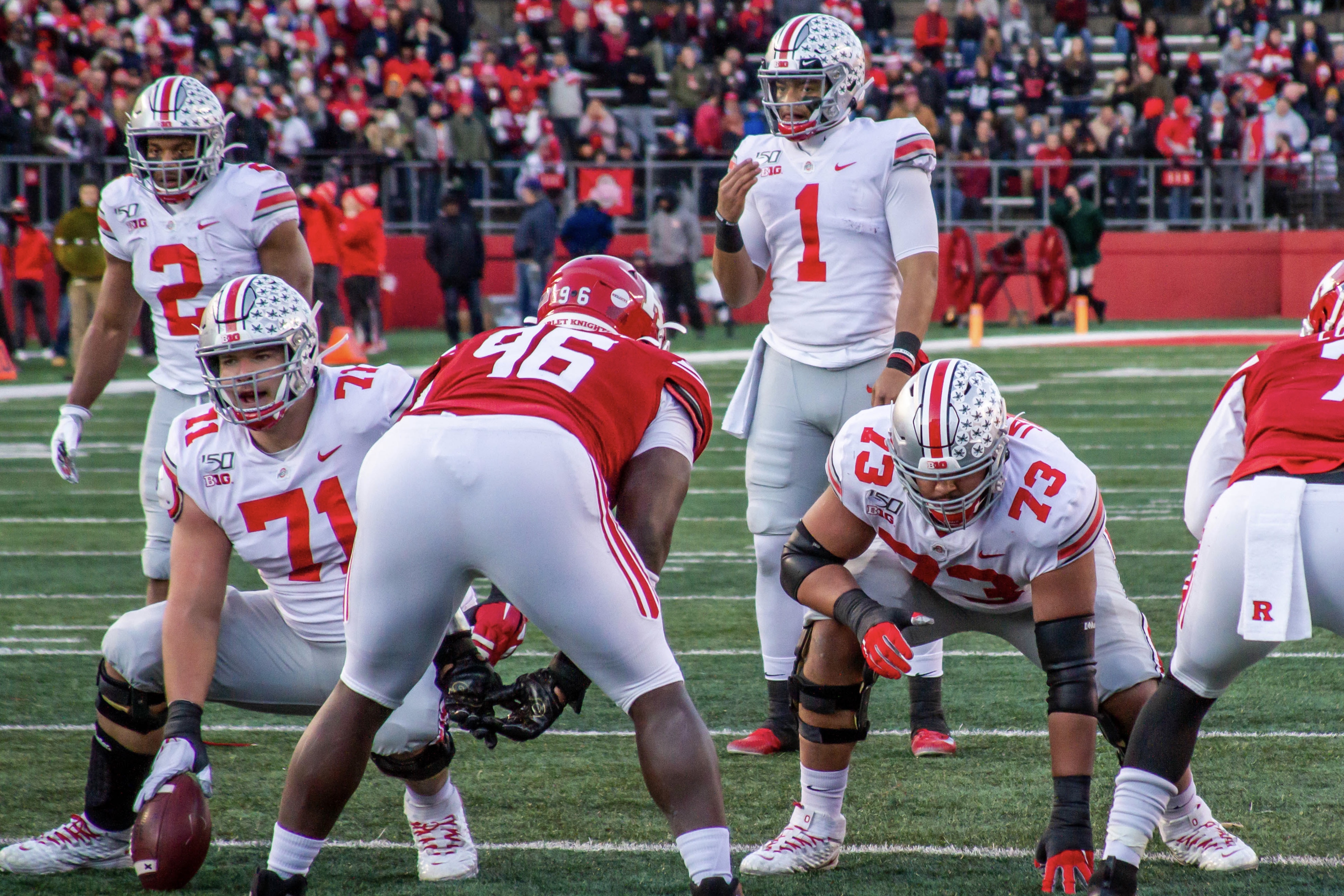 It has felt like Ohio State was holding back at times this season. The Buckeyes don’t exactly need to go all out to dominate most of the teams on their schedule, and the teams that did present real talent usually had pretty significant flaws that Ohio State was able to exploit (Cincinnati’s passing attack, Wisconsin’s passing attack, Indiana’s line). Because of that, Ohio State has gone large swaths of time without showing much of anything schematically, instead coasting on excellent execution of a few plays.

Against Rutgers, that was largely the story. Ohio State certainly was never challenged by the Scarlet Knights, as shown by a 56-21 win that would have been more drastic were it not for two turnovers in Ohio State territory. However, the Buckeyes were nowhere near as vanilla, especially in the passing game, as could be expected of a battle with such an overpowered foe. This week, film study takes a look at Ohio State’s rapidly expanding passing playbook.

Before jumping into some new looks in the passing game that brought Ohio State success, it’s important to understand why Ohio State chose this week of all weeks to switch things up, because there are a few major reasons.

Firstly, and most importantly, Rutgers was stuffing the box every play. The Scarlet Knights knew that their only hope was to create pressure and stop the run, and they sold out to do that. Because of that, Ohio State was really unable to establish a consistent rushing attack, while the backend of the defense was generally left open. The Buckeyes adjusted quickly, and took advantage of what Rutgers gave them.

This play early in the second quarter is a great example of what Rutgers was doing to Ohio State pretty much all game.

Not every rush was this drastic, but you get the point. Rutgers kept six or seven guys in the box essentially every play, and ran more zone blitzes than Ohio State has seen from anyone this season. That opens up the passing game, but for the most part, it slowed Ohio State’s rushing attack down.

With the defense in tight, and mostly in zone coverage, Ohio State knew exactly how to attack: with mesh, clearout routes, and a focus on 15-yard outs. This first such instance came early in the game, when Ohio State broke out a play it really hasn’t used a ton this season.

This is a pretty basic mesh look, and one that Ryan Day loved to run with Dwayne Haskins. It hasn’t been featured anywhere near as frequently this season, which is likely a result of a number of factors, ranging from Justin Fields’ inexperience with passes across the middle of the field to the Buckeyes really just not needing it. Ben Victor and K.J. Hill are on drag routes, with Victor as the key for Fields. Olave and Hill screen linebackers in the middle and Victor’s defender, while Jeremy Ruckert’s wheel route drags a linebacker outside. The linebacker spy from 26 is actually a good look here, but he’s so focussed on the run threat that he can never really catch up.

The Buckeyes ran the same play in the third quarter.

Again, Victor is wide open. The Scarlet Knights do a good job of route switching here, with a linebacker following Victor outside, but the fact that this was still so open shows the beauty of mesh. Regardless of what Rutgers does, or what basically every team in the country does, mesh is going to be open for Ohio State because Victor, Olave and Hill are all better athletes than almost anybody that will cover them. Well played or not, Victor is just faster than his defender.

That leads to the second reason for Ohio State breaking out these plays now. The Buckeyes have coasted through a schedule that featured plenty of talented teams, but no one that could go toe-to-toe with Ohio State’s talent. That changes at least a bit against Penn State, Michigan, and anyone Ohio State faces in the postseason. Penn State has the speed to at least keep up with the Buckeyes, as does Michigan.

Because of that, Ohio State will have to win not just with talent, but with scheme, as it did against the Nittany Lions and Wolverines in 2018. Running these new plays now accomplishes two things in preparation for those games, because it puts more on tape for Penn State and Michigan to worry about, while also getting some practice running these plays in a game situation for the Buckeye offense.

Aside from the mesh, Ohio State showed off a few other plays that it really hasn’t shown much this year, headlined by this touchdown pass to Victor.

The play here isn’t so much the focus, as Victor’s route is the star. Victor is running a sluggo route, also known as a slant and go, as made famous by the Colts when Peyton Manning, Reggie Wayne and a stable of elite receivers were gashing teams with this exact look. Victor is going to take four hard steps in like he’s running a slant or drag, forcing the Rutgers defense to collapse in. As soon as his defender flips his hips, Victor plants hard and cuts up field on the go route. He’s too athletic for the corner to catch him, and deep safety is out of position because of the fake. There may not be a better route fit for Victor’s skillset, and Ohio State will absolutely run this in its final two games of the regular season against two teams that love to play man coverage.

Now, it wasn’t all new for Ohio State. The Buckeyes still know where their bread is buttered, especially against zone defense, which Rutgers switched to primarily pretty early in the game.

These are three plays that, while different in design, are built to achieve exact same thing. They’re each looking to attack Rutgers’ defense where it is weakest in its zone, behind the shell underneath, but under the deep thirds, about 15-to-20 yards down the field, on the sidelines. The first two plays worked perfectly. Hill and Luke Farrell found plenty of space exactly where they knew they would against the zone, and Fields hits them on time.

The third is interesting, because Rutgers is actually in man coverage, and does a really good job of it. The linebacker sticks with Farrell the whole time, and probably should have been rewarded with an incompletion for his effort. However, as established with the mesh, sometimes talent is more important than anything else. A perfect throw beats the coverage, Farrell makes a great catch, and the Buckeyes have a touchdown despite a nice call from Rutgers.

Now, that won’t slide against the next two opponents, but that isn’t the point. The point of a game like Ohio State’s win over Rutgers is essentially as an advanced scrimmage and the Buckeyes got exactly what they wanted out of it. There are things to clean up, sloppiness to fix, and plays to tweak. However, Ohio State won handily, practiced some new looks, and presented more for its next two opponents to prepare for. That’s as good as it gets against Rutgers, regardless of the final score.