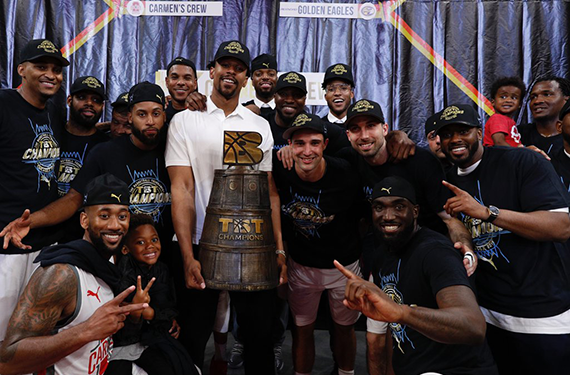 Winning The Basketball Tournament earned the former Buckeyes significantly more than a national title would have, however, $2 million more, to be exact.

Sullinger, the team’s head coach, told Buckeye Sports Bulletin about how the cohesion of the Scarlet and Gray contingent gave Carmen’s Crew something more to play for than a large sum of money.

“It means everything,” Sullinger told BSB. “You don’t get this type of bond anywhere. These guys — we fought hard in college — we’ve got a variety of years and on top of that, we’ve got years of playing in open gym — that’s huge.

The togetherness Carmen’s Crew played with helped the team advance past talented squads on its way to the title game. The teams in TBT included many other former college players including those from Kentucky, Arkansas, Kansas, Syracuse, Wisconsin, UCLA and more.

Carmen’s Crew knocked off four-time defending TBT champion Overseas Elite and the 2018 runner-up Eberlein Drive on its path to a showdown with the Golden Eagles.

Success on defense helped propel Carmen’s Crew past a number of talented opponents, and Buford credited Craft for his expertise on that end of the floor.

“I always have confidence with Craft on the floor,” Buford said. “Craft, Dave (Lighty), C.P. [Courtney Pigram] – he’s been tremendous on the defensive end — when you’ve got those three guys it brings an edge to us defensively. We just feed off of those guys.

“Aaron — he makes the game so much easier, especially defensively. Offensively, too, but defensively — you know what you’re going to get out of him. You know he’s going to give you 100 percent all day — practice, game, anywhere — you’ve got to love playing with the guy.”

Craft, the NABC Defensive Player of the Year in 2014 at Ohio State, did not leave his stellar reputation on defense in Columbus.

While with the Santa Cruz Warriors in the NBA D-League in 2015, Craft won Defensive Player of the Year and a D-League championship. Then in 2018, Craft earned Pro A Best Defender honors while helping AS Monaco win the French Leaders Cup.

The stingy defense of Craft combined with the scoring prowess of Buford, Lighty and Diebler made Carmen’s Crew a tough matchup for TBT competitors.

Lighty, a two-way threat from Cleveland, led the way in the title game with 17 points, seven rebounds and four assists, while Buford added 14 and Diebler scored 11.

Sullinger credited the team’s selflessness as an advantage over its opponents.

“That’s the beautiful part. I don’t have to tell people about their roles because they already know their roles. The chemistry is always there, which helps us be able to get off to fast starts.”