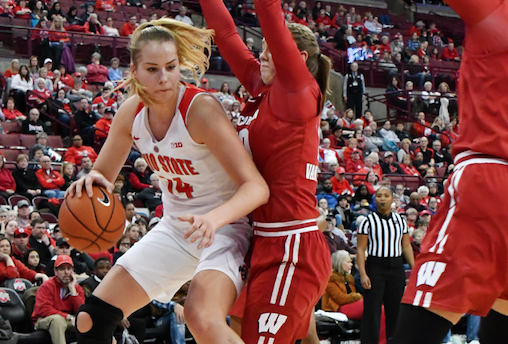 There are plenty of unknowns about the Ohio State women’s basketball team heading into the 2019-20 season, and that was put on display when both the coaches and the media left the Buckeyes out of their preseason top five lists.

Instead, Maryland was ranked No. 1 in both polls, with Michigan State, Michigan and Indiana also showing up in both polls. Purdue ranked No. 5 for the coaches, and Minnesota was the fifth team that rounded out the list for the media.

Ohio State did get a player to land on the coaches’ picks for their Preseason All-Big Ten team, with sophomore forward Dorka Juhasz landing on that list, but not on the media’s selections.

Juhasz led Ohio State in both scoring (11.7 points per game) and rebounding (9.0 rebounds per game) in her true freshman season.

Maryland’s Kaila Charles was a unanimous selection on both lists, and was the pick for Preseason Player of the Year by both media and coaches alike.

I was able to vote in the preseason lists, and I agreed with eight of the 10 players selected by both the media and the coaches, as well as three out of the five teams the media selected.

I had Juhasz in my list for the Preseason All-Big Ten team, and I expect her to be a major leader for the team that comes in with seven freshmen. Juhasz is one of the few sure-fire players the Buckeyes have, and should get a significant amount of minutes at the forward position.

I also did place the Buckeyes in my top five at No. 4. This omission from the media and coaches was less of a surprise, as I see Ohio State as a team with a whole lot of potential, but one that is extremely unproven and that has a multitude of question marks.

But the Buckeyes also hold loads of young talent and some of the highest-rated prospects in the NCAA, and if they can perform up to their potential, I think a top five spot in the conference is more than within reach.

My Preseason Big Ten Player of the Year