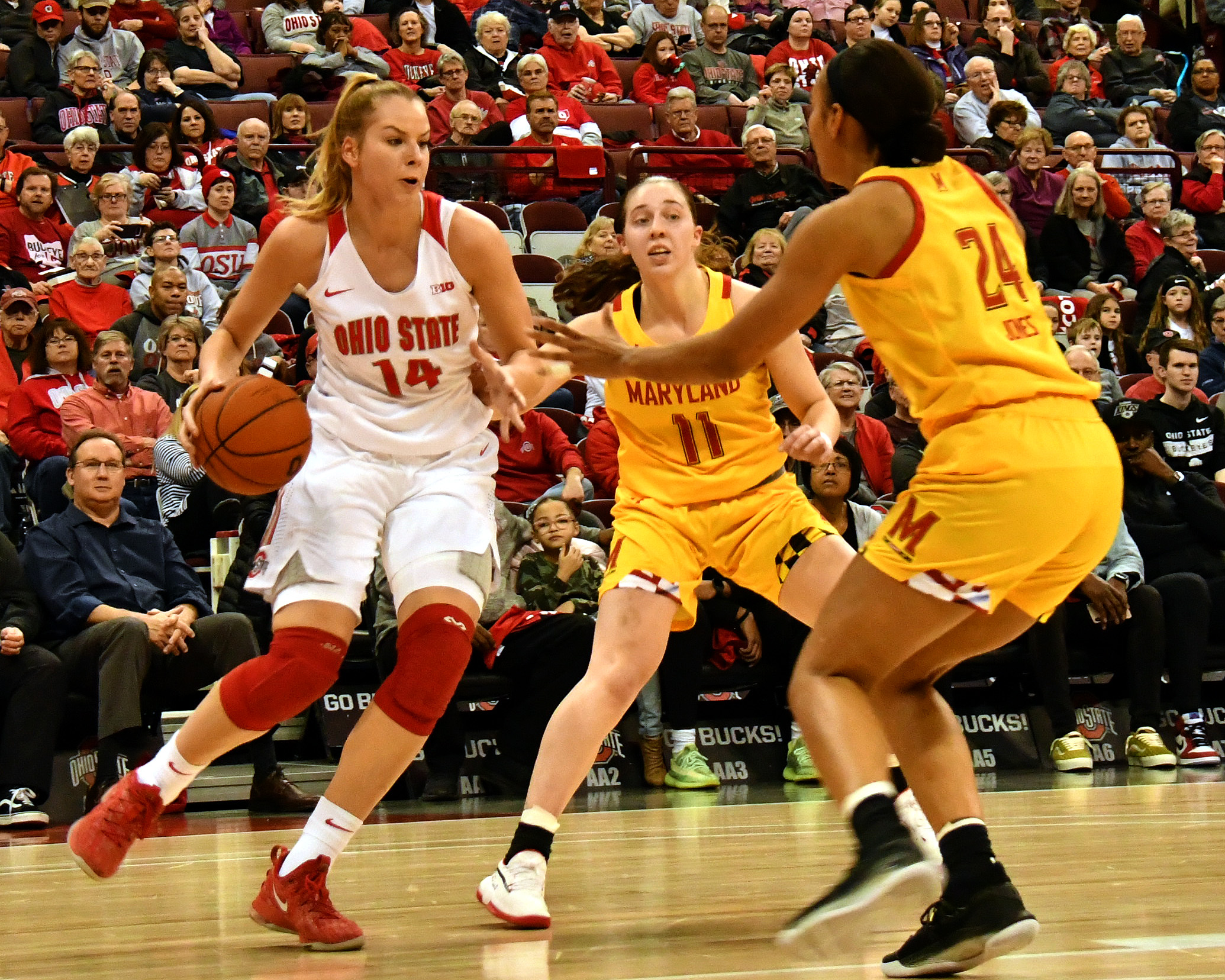 After missing Sunday’s game against Wisconsin, Ohio State sophomore forward Dorka Juhasz is expected to play in the matchup Thursday against Minnesota, according to head coach Kevin McGuff.

“I think she’ll be fine for tomorrow,” McGuff said.

Juhasz was left out of the game against the Badgers with a right ankle injury, even after going through warmups and the team shoot around.

Taking her place in the starting lineup was freshman forward Rebeka Mikulasikova, who scored 12 points and added five rebounds in 23 minutes during her first collegiate start.

Mikulasikova said she was told that she would be starting “maybe five or 10 minutes before” game time.

“Coach Tamika (Jeter) told me before the game that Dorka is not playing, so I have to start, and at first I didn’t expect it, so I was in shock, but then I just took responsibility and I went in there as a starter,” Mikulasikova said. “I went to Tamika and she just told me some calm words that I was working for this all these months, so I was just like ‘I need to take this opportunity and play what I can.'”

This will not be the first time Ohio State has taken on the Golden Gophers this season. On New Years Eve, the Buckeyes went on the road to take down Minnesota 66-63.

“They’re good, they’re really good,” McGuff said. “They play really fast, they can shoot the three extremely well and so we’re going to have to really be good defensively.

But one key thing will be different from the previous matchup: Minnesota has since lost star guard Destiny Pitts to the transfer portal after she was suspended for a Jan. 12 game against Illinois for a “body language” issue, a game that the Gophers lost 74-71, which is to this day the Fighting Illini’s only in-conference win.

Minnesota has gone 4-5 without Pitts this season, but had won three straight games before losing by 25 at home to Michigan on Monday.

Pitts averaged a team-high 16.3 points per game and scored a game-high 26 points against Ohio State in the previous contest.

“We just have to learn from the last game,” freshman guard Madison Greene said on the incoming Minnesota matchup. “They were really good shooters, and I feel like since then we’ve become a better team, and we’re going to play them without their star, so hopefully that will be an advantage for us.”

Taiye Bello has been a major factor in keeping the Gophers afloat. The senior forward has averaged 12.2 points and 10.0 rebounds per game this season, and McGuff said he expects a similar tough fight as the previous matchup, even without the star power of Pitts.

“They’ve really kind of kept the same thing going. They’re still playing fast, still shooting the three, will throw it inside especially to Bello, they really have other people stepping up,” McGuff said. “To their credit, I mean Pitts was a great player and they miss her, but they’ve had some people step up, so they’re a very similar team.”

Ohio State takes on Minnesota at home Thursday at 7 p.m.