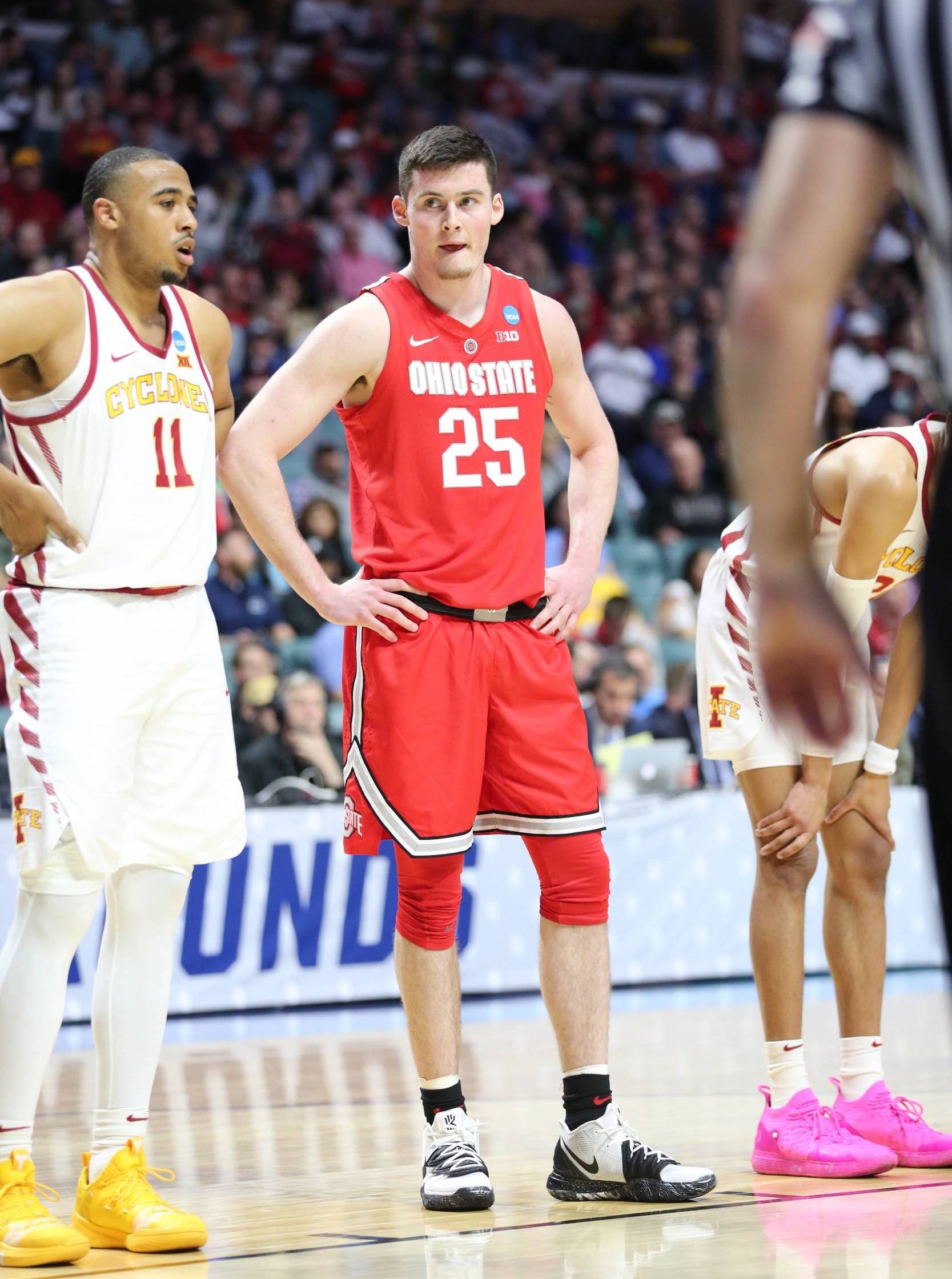 TULSA, Okla. — From a personal standpoint, what Ohio State sophomore center Kaleb Wesson went through this season was not easy to endure.

Granted, his suspension for the last three regular-season games for violating university policy was self-inflicted. Then there was his penchant for attracting attention by the men in stripes, so much so that coach Chris Holtmann called the head of the Big Ten officials to discuss what he thought was unfair treatment of the 6-9, 270-pound Westerville South (Ohio) product.

Wesson fouled out five times and on nine other occasions had four fouls for the Buckeyes (20-14).

From a team standpoint, the suspension and foul troubles have in an odd way made the Buckeyes better by not being so dependent on him. OSU lost every game during his suspension but showed signs of adjusting to life without Wesson.

The improvement proved to be a game-saver when the Buckeyes, the 11th-seed, downed No. 6 Iowa State 62-59 on Friday in the first round of the NCAA Tournament Midwest Regional in Tulsa, Okla.

Wesson was called for his second foul with 6:31 left in the first half and the Buckeyes up 20-18. Lindell Wigginton made both free throws for the Cyclones to tie the game as Wesson went to the bench for the rest of the half.

Sophomore Kyle Young replaced Wesson and had a rebound.

“Every time I come in, I try to do what I can to help the team, whether it’s rebounding by itself or whatever it is,” Young said.

The Buckeyes went on a 6-0 run with baskets by seniors C.J. Jackson and Keyshawn Woods and free throws from junior Andre Wesson and freshman Duane Washington Jr. before the Cyclones scored four straight to make it 26-24 at the half.

The lead and maybe the game were there for the taking by the Cyclones but the Buckeyes held them at bay until Wesson returned. He had 15 of his 21 points and six of his 12 rebounds in the second half.

Jackson said holding off Iowa State was critical but not surprising.

“Kaleb’s time he missed, we lost those three games,” he said. “It kind of helped playing without him, foul trouble or whatever the case may be. When he went down early in the first half it wasn’t something we weren’t too unfamiliar with.”

Andre Wesson agreed that his younger brother’s suspension made the team stronger.

“That three game-stretch definitely helped us,” Andre Wesson said. “We relied on him a lot. That’s why we dropped those three  games. Learning how to play without him was big.”

Kaleb Wesson was appreciative of what his teammates, particularly Jackson and Woods, did while he could only watch.

“It’s great when you’ve got seniors that if I leave that court can produce and keep the lead,” he said.

Musa On The Loose

Sophomore Musa Jallow had his most complete game in almost two months when he had 11 points on 5-for-5 shooting, including a three-pointer, and added six rebounds, two assists and three steals.

Jallow (6-5, 200) had gone 15 games without reaching double figures in scoring and had been scoreless in eight of them since scoring 12 points and grabbing six rebounds vs. Purdue on Jan. 23.

So, what got into him?

Holtmann said Jallow is starting to use his talents more.

“We’re seeing glimpse where his athleticism is becoming more apparent,” Holtmann said. “That’s kind of what we’ve been fighting all year, him using his athleticism.”

Holtmann is 5-0 in first-round NCAA games, the first three coming with Butler. … The Buckeyes are 7-0 vs. Iowa State, including 3-0 in NCAA matchups and 2-0 in Tulsa. … The Big Ten is 7-1 in the first round with Wisconsin the only loser. … OSU is the only of the four 11-seeds to win.

“We knew we weren’t going to win unless he imposed himself physically for as many minutes as we could ride it. He had to stay out of foul trouble in order for that to happen.” — Holtmann on Kaleb Wesson, who finished with the two fouls he had in the first half