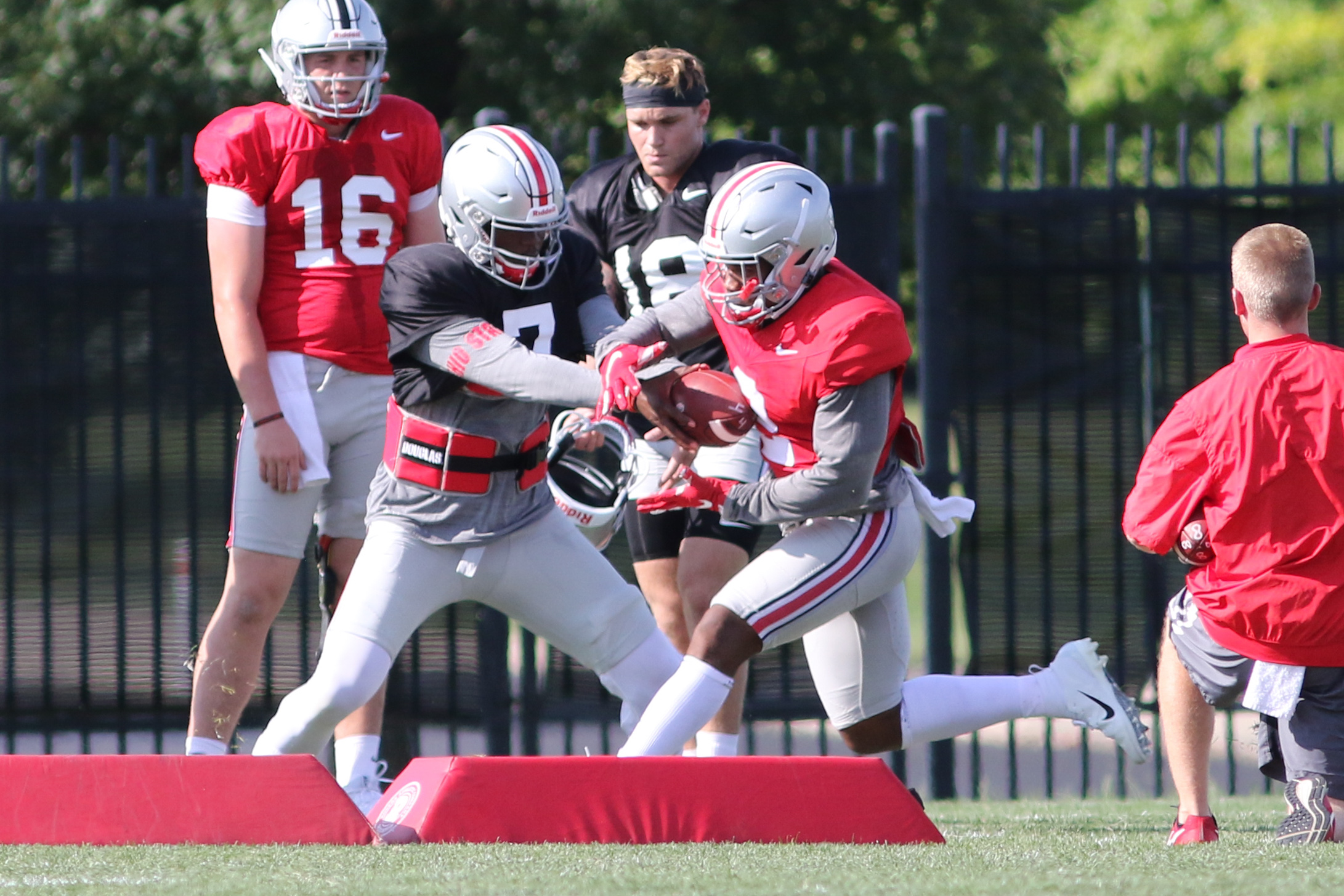 Two weeks after the start of Ohio State’s fall camp, acting head coach Ryan Day released a position-by-position of the team’s progress under his watch. Day is in charge of the Buckeyes amid a university investigation into head coach Urban Meyer’s handling of domestic abuse allegations against a former assistant coach.

Meyer has been on paid administrative leave since before the start of fall camp. A complete breakdown of the story can be found in the links posted below.

For now, Day is the head man for the Buckeyes, and he’s preparing the team for its Sept. 1 season opener against Oregon State at Ohio Stadium, a noon kickoff on ABC.

What follows are the highlights of his updates on each position group on offense so far this fall.

Dwayne Haskins and Tate Martell enter the season as Ohio State’s top quarterbacks, with Haskins pegged as the successor to J.T. Barrett, who holds most of the major passing records in program history.

In his update, Day noted the youth of the quarterback group, but said Haskins and Martell have both been “putting in the work on and off the field” in preparation for the season. He also noted that freshman Matthew Baldwin won’t be fully healthy for a couple more weeks as he recovers from an ACL surgery.

Both sophomore J.K. Dobbins and junior Mike Weber are having “a productive camp,” Day noted in his update, while the veterans are also helping a young group of backs adjust to the college game.

Day noted that freshmen Master Teague and Brian Snead “have both shown flashes of brilliance,” adding that they each have bright futures in Columbus.

The veterans at wide receiver – especially fifth-year seniors Parris Campbell, Johnnie Dixon and Terry McLaurin in addition to junior K.J. Hill – have become some of the most important leaders on the team, but they make up just part of a deep receiving corps. In his fall update, Day named juniors Austin Mack, Binjimen Victor and C.J. Saunders as individuals who have been “practicing at a high level” to help make the receivers one of the deepest units on the team.

The acting head coach also named freshmen Chris Olave and Jaelen Gill as players who have emerged this fall, while he added that Kamryn Babb is “on pace for a full recovery” after tearing his ACL.

“Brian Hartline has embraced the new role of WR coach and has brought the ‘juice’ each day,” Day added.

With Luke Farrell, Rashod Berry and Jeremy Ruckert battling for a starting spot this fall, Day said the tight ends have “had a very competitive preseason camp.”

That said, Day noted that the 2018 tight ends have a chance to be better than they were last year despite losing Marcus Baugh to the NFL. He also added that sophomore Jake Hausmann has missed some time with a hamstring injury, but he’s back on the practice field now.

Senior Isaiah Prince, fifth-year senior Demetrius Knox and junior Michael Jordan were named as the leaders of the group by Day, with all three pegged as likely starters in 2018.

“The competition within this unit has raised the level of play across the board as guys are battling for starting positions,” Day said.

This fall, the left tackle competition has been down to sophomore Thayer Munford and junior Joshua Alabi, Day said, while fifth-year senior Brady Taylor, Jordan and redshirt freshman Josh Myers are battling at center. He also called the development of fifth-year senior guard Malcolm Pridgeon a “bright spot” this fall.