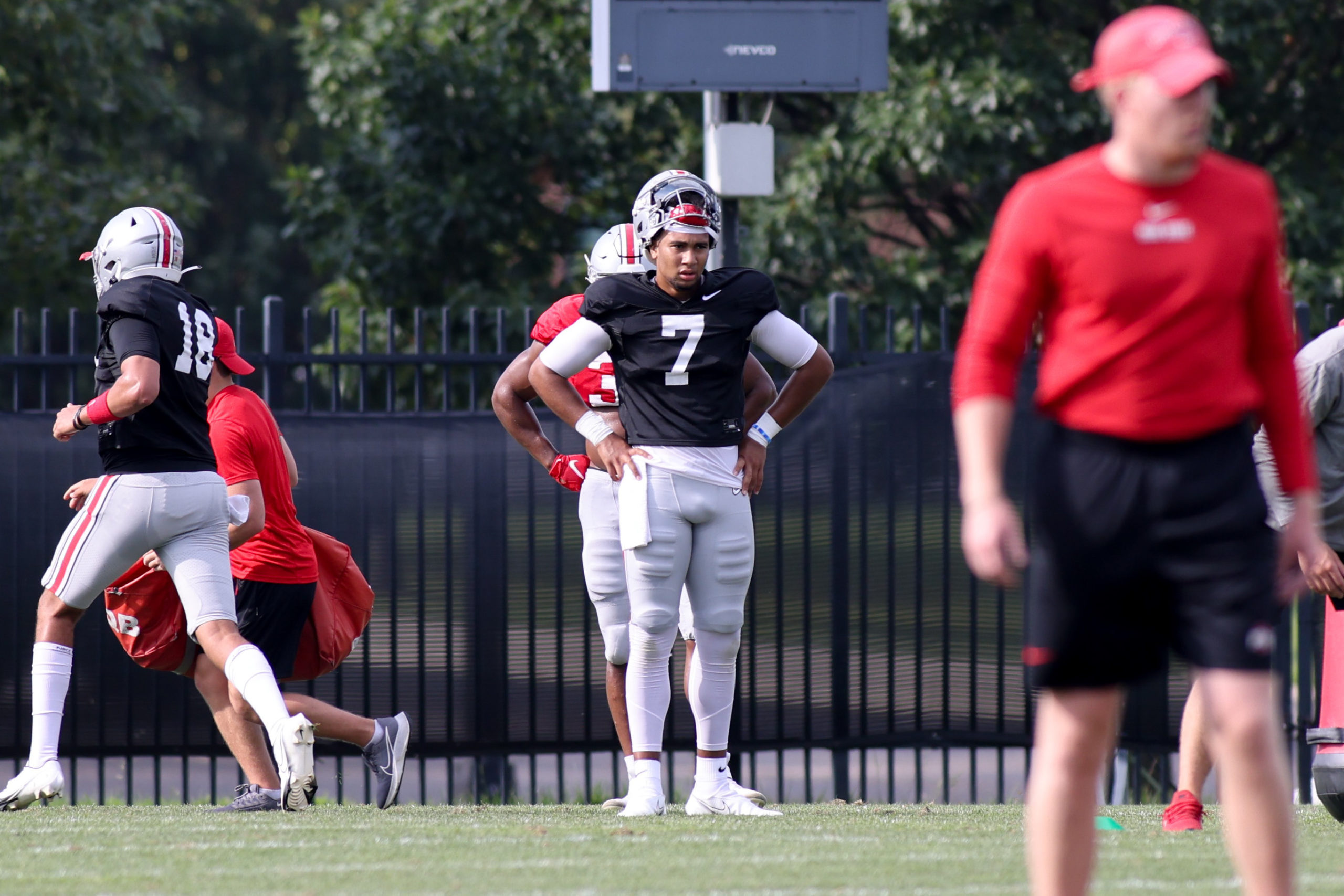 Ohio State head coach Ryan Day said Monday that C.J. Stroud has begun to separate himself in the Buckeyes’ quarterback battle, but the redshirt freshman didn’t have a chance to prove that in front of members of the media Wednesday.

At the final open practice of the preseason, which doubled as the first in which the media could feast its eyes on the passing ability of true freshman Quinn Ewers, Stroud did not pass the ball much at all during drills or live work.

“Something typically we do in camp is just shut them down at times with their arm,” Day said. “So that’s all that was.”

Although it is unlikely that Day would have offered up any details had Stroud’s situation been more serious, the Buckeye head coach said limiting his workload was rather routine.

As for Ewers, the No. 1 recruit in the country who officially joined the Buckeyes’ class of 2021 this past weekend, Day said the Texas native is still “just learning where to go and where the locker room is and everything else.”

Ewers was not heavily involved in seven-on-seven or 11-on-11 drills, with redshirt freshman Jack Miller and true freshman Kyle McCord seeing the bulk of the actual passing downs on Wednesday, but Ewers did have a few chances to let the ball fly in live action.

Day doesn’t expect the newest addition to his roster to factor into the preseason competition all that much though.

“There’s just so much for him to learn in such a short period of time,” Day said. “Usually we have months upon months of time to prepare them before they even step on the field. He just showed up, and learning formations, learning everything like that. It’s just individual drills, we keep him after practice and try to teach him the offense, but we’re certainly not just gonna throw him in there. That’s not fair to him and that’s not fair to the other guys. If he doesn’t know where things are, he could get somebody hurt.”

Still, Day said Ewers will “pick it up quick,” and said his teammates have not shied away from helping him out with the transition.

In fact, if Stroud’s lack of passes helped anyone in practice Wednesday, it was Miller and McCord, who had a chance to show their talent with an uptick in reps in front of the media and coaching staff.

Despite Day tipping his hand about the direction of the quarterback room at the beginning of the week, at least for the start of the upcoming season, the Ohio State head coach said the preseason is just as important for the two passers that have fought Stroud for the job every step of the way.

“What a great opportunity today for them to really step up and take reps with the ones,” Day said. “Big evaluation for those guys this week as well now that we got a few reps this week with the ones. By Friday we need to figure out who’s game ready. So this is a big week for everybody, but certainly those guys as well.”