Column: Second-Half Comeback Showcases What Could Have Been 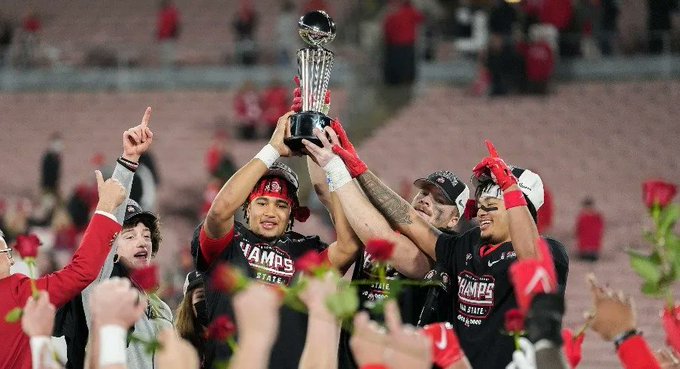 If Ohio State had found the same second-half motivation against Oregon and Michigan that it generated against Utah in the Rose Bowl, we’d almost certainly be previewing a national title matchup today rather than piecing together autopsies on an 11-2 Rose Bowl season without a Big Ten title and without a playoff berth. With the push that the Buckeyes generated in the final 30 minutes against the Utes – spearheaded by 27 points from an electric offense – they would have had a great shot at storming back to erase Oregon’s 14-7 halftime lead or Michigan’s 14-13 edge.

Instead, Ohio State left the locker room in those instances as flat as (or against Michigan, flatter than) it entered and took a pair of losses that its playoff hopes could ill afford. Win either of those games, and the Buckeyes are almost certainly in the College Football Playoff. Win them both, and they would have claimed the top seed, likely drawing a matchup with fourth-seeded Cincinnati – a matchup that instead went to Alabama.

Of course, that’s not how the game works. Performances can’t be plucked and planted where they’re needed most, and if they could, Ohio State would likely have some late-season rearranging to do with its showings against the two Michigan teams. These Buckeyes came up short in the second half against the Ducks and Wolverines, and a stunning Rose Bowl comeback isn’t going to turn that around.

It does, however, offer a window into what this team could have been and, perhaps, what it will be a season from now. For the first time all season, Ohio State took a high-quality opponent’s best shot, rolled with it and delivered an even bigger knockout blow to secure a victory. The Buckeyes exited the locker room on a mission, generated the defensive stops they needed when they needed them, and paired that defensive showing with an offensive performance for the ages to snatch victory from the jaws of defeat against a more-than-capable opponent.

It bears asking what this group would have been with a defense that played as free and loose as this one did in the second half on Saturday evening, but there’s no satisfactory answer for such a hypothetical. It’s the nature of the sport. For two seasons in a row, Ohio State has had a title-caliber offense without the defense to match, and for two seasons in a row, it’s been that problematic defense that has held the Buckeyes back from a title.

In that second half, Ohio State showed something of a path forward. The defense isn’t likely to leap back into elite territory in 2022. New defensive coordinator Jim Knowles is known for building top-tier defenses when given the time to flesh out his system, but immediate turnarounds have not been his calling card, and Ohio State will likely need to make peace with that. More likely is a return to competence, like that second half showed – a defense held back by talent weaknesses that the best opponents can exploit but that delivers steady tackling, smart coverage and players who look confident in what they’re doing.

Ohio State still has to contend with the best of the best to get there, and there’s no telling what the other blue bloods of the sport will look like a season from now, but a defense closer to the one Ohio State rode to its Rose Bowl comeback is a defense that can get the Buckeyes right back into the playoff, if not win the whole thing. And with so many young players contributing in that second half and a full-scale change seemingly on the horizon within OSU’s defensive staff, a return to competence seems like a fair wager as it stands in January, with the Buckeyes staring down a critical eight months of offseason preparation.