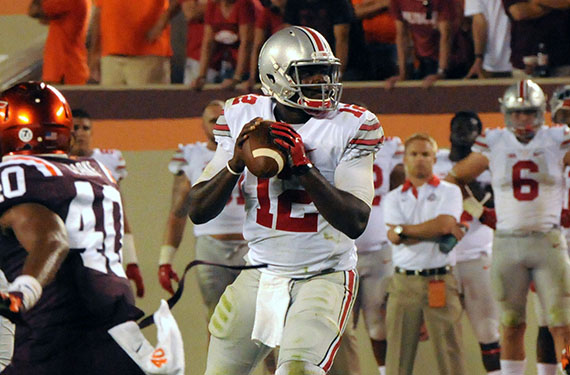 There was a clash between former Ohio State football players on Friday, but it did not occur on the gridiron.

Over 20 former Buckeyes gathered at Huntington Park on Friday for the Cardale Jones Charity Softball Game, with all of the proceeds going to the Buckeye Cruise for Cancer. Although it was a matchup between offensive and defensive greats from Ohio State history, Jones said it was exciting to have a large number of former Buckeyes back in Columbus for a good cause.

“It feels great because a lot of these guys are living in all different parts of the country, so it’s cool for them to come around and back to Columbus for one common goal: to try to raise money for cancer research,” Jones said. “These guys usually drop whatever they’re doing when I give them a call, and vice versa, so I am appreciative of all of these guys.”

Friday’s game served as the third-annual charity contest set up by Jones, and he emphasized that he’s seen growth in a multitude of areas. He mentioned that one of the most prevalent developments is an uptick of interest from former Buckeyes from around the country.

Justin Zwick, who played quarterback for Ohio State from 2003-2006, was a team captain in the event last year and emphasized the success of the game and how it has intrigued several other former members of the program to return to Columbus for it.

“That first year was at the softball stadium over at Ohio State,” Zwick said. “There was a great crowd and it was a ton of fun. After that, everybody heard about it and wanted to be on the team.”

As the event has grown over the years, there were numerous first-time additions to the rosters this season — including former Buckeye guard Chase Farris. He said he was excited to be back in Columbus with several of his Ohio State teammates and other Buckeye greats for the event.

“It feels good to be around the guys.” Farris said. “Once you get around them, there’s no other feeling like it.”

Denver Broncos defensive end Dre’Mont Jones was the youngest former Buckeye in attendance at the event. Although only a handful of his past teammates were competing, he said he was excited to be around some of the older guys that he had heard about from his time with the Buckeyes.

“I heard about some of those names back in the day, back when I was younger and I never really met them,” Dre’Mont said. “Seeing them now it’s like, ‘Wow, I’ve really grown up.’”

As Cardale Jones was one of the younger former Buckeyes at his own event, he echoed Dre’Mont’s sentiment and highlighted the encouragement he’s received from the Ohio State football community about the event.

“It’s great because these guys are super supportive, even though I didn’t play with half of these guys,” Cardale said. “It’s just pretty cool to see that the Buckeye brotherhood lives on.”