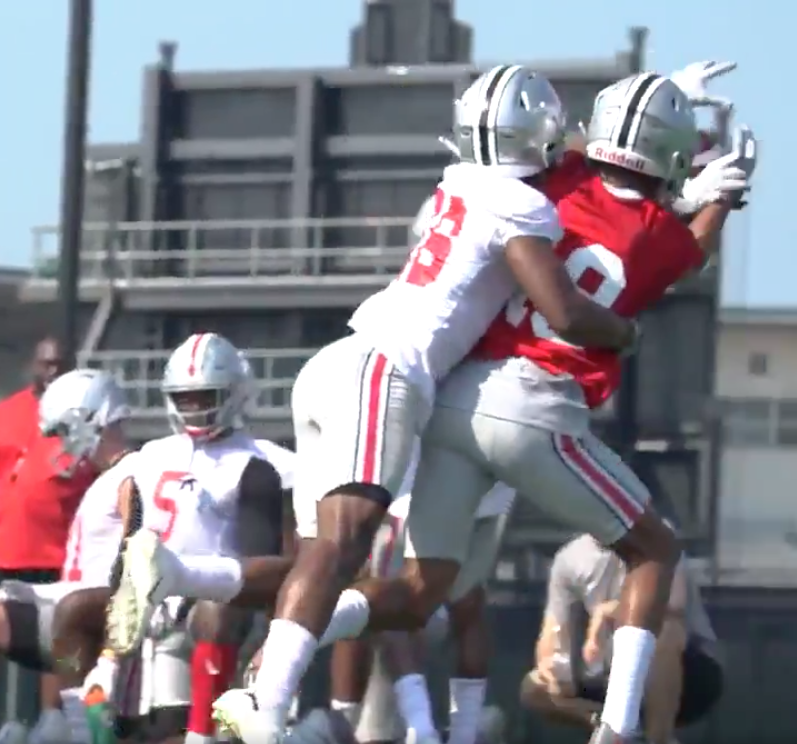 Two more players lost their black stripes Wednesday, Ohio State announced after practice at the Woody Hayes Athletic Center, bringing the team’s count of freshmen to 15 with linebacker K’Vaughan Pope and cornerback Cameron Brown as the latest rookies to officially join the Buckeyes.

As game-week preparations for Ohio State continue in advance of its season opener Saturday against Oregon State, a noon kickoff on ABC from Ohio Stadium, Pope and Brown were recognized on the outdoor turf fields when the Buckeyes completed another day of practice.

Director of player development Ryan Stamper first named Pope, who received a seal of approval from linebackers coach Billy Davis to have done enough in getting the black stripe removed.

“First guy been busting his butt, finally got a thumbs up from his coach,” Stamper said. “K’Vaughan Pope, get up here.”

Pope (6-1, 226) acknowledged Davis, Stamper and the linebackers — a position group loaded with juniors and sophomores, including one of the team’s seven captains in Tuf Borland.

“I appreciate y’all boys,” Pope said. “I mean, I love y’all boys. Thank you for bringing me in. Shout out LBU, Coach Davis, Coach Stamp. You already know. Go Bucks.”

Stamper next named Brown, who still has room for improvement.

“Second guy got a long way to go,” Stamper said. “But he’s hungry and getting better, man, hungry. Cameron Brown, get up here.”