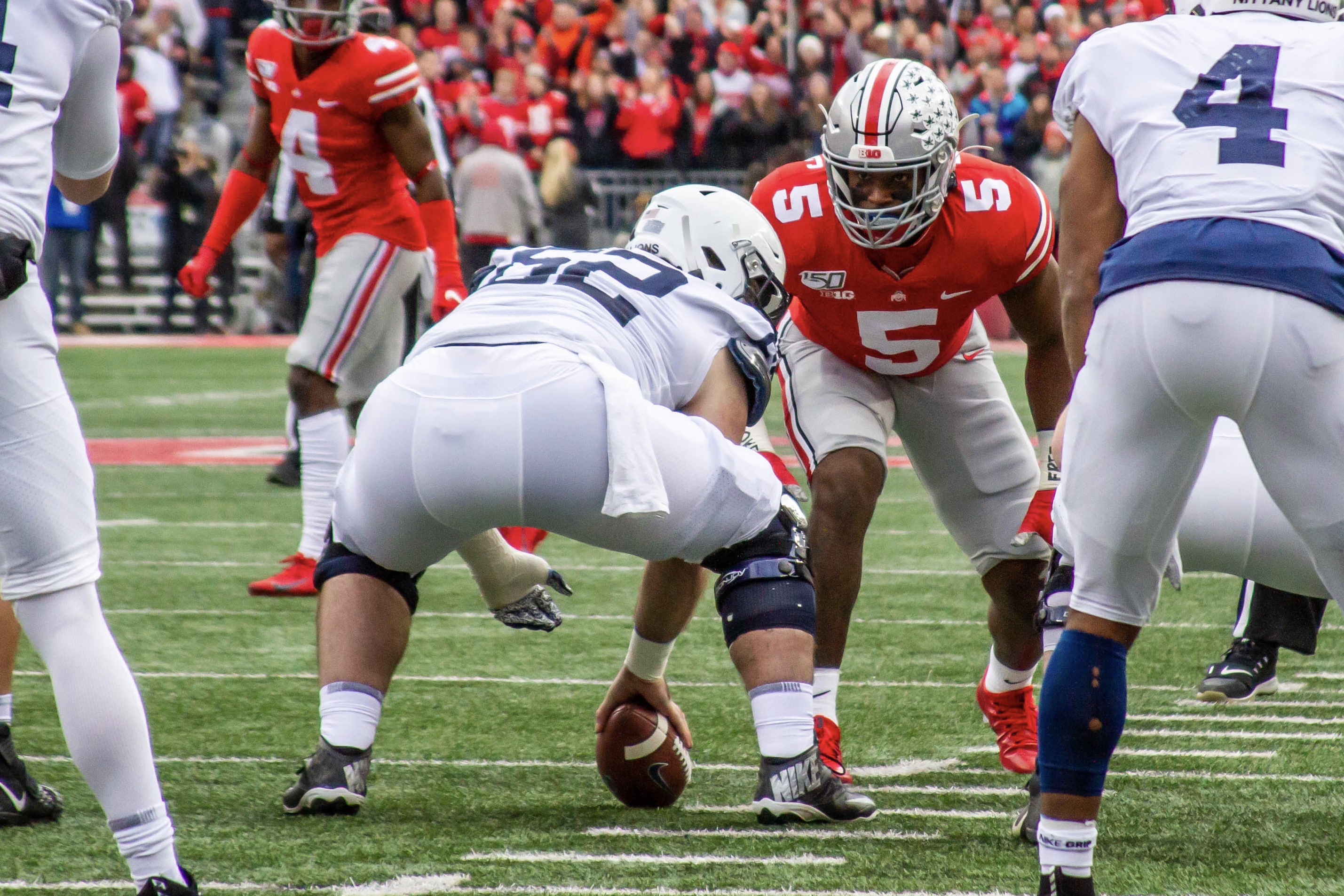 After a relatively easy season-opening win over Nebraska, No. 3 Ohio State hits the road for the first time this year with a trip to No. 18 Penn State (7:30 p.m. on ABC).

The Nittany Lions are coming off a loss to Indiana, but a win over the Buckeyes would put them back in the driver’s seat in the Big Ten’s East Division.

That said, the Big Ten’s decision to not allow the general public means Ohio State won’t have to deal with “White Out” conditions at Beaver Stadium. And that’s one reason why the staff of Buckeye Sports Bulletin — which includes Wyatt Crosher, Joe Dempsey, Andrew Lind and Patrick Mayhorn — anticipates the Buckeyes walking away victorious on Saturday night.

Check out their full predictions below:

WC: “After the performances that these two teams had in the first week of the Big Ten season, I am predicting an Ohio State win, but I am also expecting a Penn State team that is fighting for its life in the College Football Playoff, so there will be some more desperation than what it showed against the Hoosiers in Week 1.

“I predict Ohio State to win, but in close fashion, with the Nittany Lions battling it out and forcing the Buckeyes’ defense into situations it is not quite used to yet after winning handedly against Nebraska.

“I am expecting Justin Fields to, again, show how talented he truly is, but I am also expecting the Nittany Lions to make some plays, especially through quarterback Sean Clifford, both in the air and on the ground. But, it will not be enough to overcome the Buckeyes’ impressive air attack through Chris Olave, Garrett Wilson and Jameson Williams, the latter of which will get more targets than the game prior, and the Buckeyes will edge it out in a game that is never truly in question, but still remains within 10 points.”

JD: “Although they lost their first game to Indiana, the Nittany Lions allowed only 211 yards. The Penn State defense can be a threat to the Ohio State offense, with a talented defensive line and standout safety Lamont Wade in the secondary. Penn State allowed only 1.6 yards per carry for a total of 41 yards against the Hoosiers, and the Buckeyes struggled to sustain a consistent running attack against Nebraska, so the battle in the trenches will be critical.

“Defensively, Ohio State will need to keep dual-threat quarterback Sean Clifford in check. The Cincinnati native led Penn State with 119 of the team’s 250 rushing yards in its first game. If the Buckeyes cannot contain his running, they will be in trouble. In the passing game, Clifford threw for 238 yards and three scores against Indiana, but he also threw two interceptions. Creating turnovers can turn a close game into a Buckeye rout if Clifford and the Lions are not careful.

“The team that wins the turnover battle will likely win this matchup in Happy Valley, but in a no-turnover game, the Scarlet and Gray have the advantage. Justin Fields puts together one of finest performances yet, bolstering his Heisman Trophy campaign with an all-around performance in a Buckeye victory.”

AL: “A game played at night on the road on Halloween under a full (or blue) moon would usually be a cause for concern, but all of that goes out the window because Ohio State will once again be in an empty stadium on Saturday night.

“Penn State would have needed that atmosphere, which I think makes Happy Valley the toughest place to play in the Big Ten, behind it in order to pull an upset, especially without their best player (linebacker Micah Parsons) and two of the nation’s top running backs (Journey Brown and Noah Cain). The Nittany Lions simply won’t be able to stop Buckeyes quarterback Justin Fields or control the clock to keep him off the field, which will lead to him scoring five touchdowns in the win.

“If Penn State turns the ball over and commits penalties like it did against Indiana, this game has a chance to snowball. And while the Nittany Lions have played the Buckeyes better than anyone in the conference over the last five years, the talent gap will be especially apparent tonight.”

PM: “It’s difficult to pick against an Ohio State-Penn State game being close, given the recent history between these two teams. Since James Franklin arrived in 2014, only two games between these two have seen the final score exceed a touchdown difference, in 2015 and 2019.

“I think that this will be the third. Penn State really didn’t look that bad against Indiana, as it still put up plenty of yards and was able to hold the Hoosier offense under water until the final minutes of the game. However, the way that the Nittany Lions played that game makes me think that they cannot truly compete with the Buckeyes.

“Firstly, quarterback Sean Clifford just isn’t the kind of passer needed to win games like this. He’s a solid player and I love offensive coordinator Kirk Ciarocca, but I don’t think that Clifford has the juice to beat Ohio State’s secondary with any kind of consistency.

“Second, Penn State runs a lot of man coverage and pairs it with plenty of blitzing. That worked well against Indiana. It will not work against the Buckeyes. Chris Olave and Garrett Wilson are matchup nightmares, and No. 3 receiver Jameson Williams may honestly present an even tougher challenge than they do because of his speed. I don’t think the matchup favors Penn State there.

“With that in mind, Ohio State goes into Happy Valley and pulls out a comfortable win, though Penn State does stick within two possessions for all 60 minutes, preventing a blowout.”