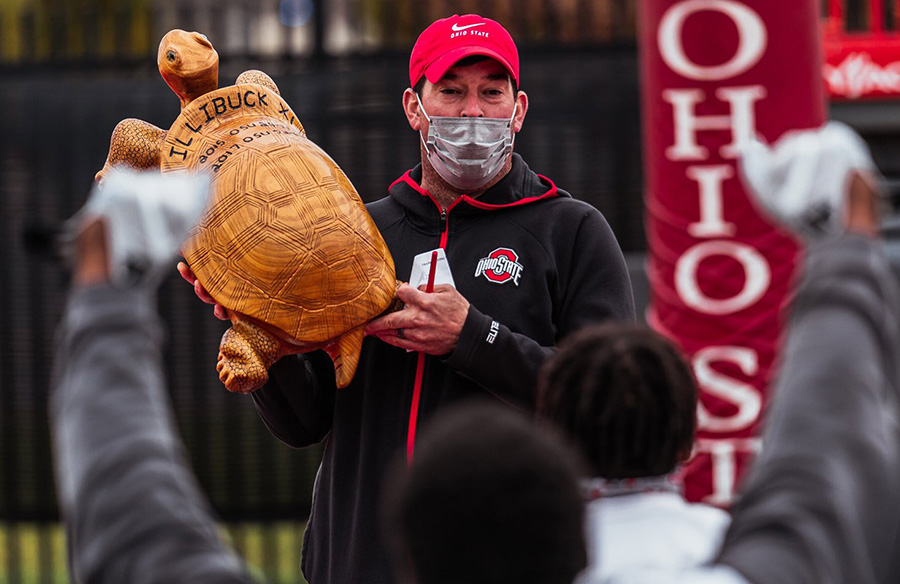 Ohio State will be without head coach Ryan Day and several players when it travels to Illinois on Saturday (12 p.m. on FS1) after they tested positive for coronavirus.

Will it impact the Buckeyes in an important game against the Illini? Buckeye Sports Bulletin Staff writers Wyatt Crosher, Joe Dempsey, Andrew Lind and Patrick Mayhorn have made their predictions below.

WC: “Ohio State-Illinois appeared to be a pretty straightforward lopsided win for the Buckeyes to get to 5-0, but after a week of positive COVID-19 tests that has at least taken out head coach Ryan Day, there’s a potential for this game to be closer than expected.

“We won’t know who the players that will be out for Ohio State are until Saturday morning, but unless it is Justin Fields, I don’t see this one really getting close enough to be as interesting as some of the lead up to it has been.

“Illinois comes in the winner of its last two, and maybe Brandon Peters can make some plays against a questionable secondary, but, again, barring some major players out, the Buckeyes are far too good on the offensive side of the ball for it to matter.

“I will take an Ohio State team motivated to prove that it can play four full quarters in its easiest victory of the season to this point, even without Day on the sidelines.”

JD: “Let’s be real, Ohio State is going to extend its perfect season on Saturday against Illinois. The Illini are an improved team with competent quarterback play and a defense that can create turnovers, but they remain severely overmatched in the battle for the Illibuck Trophy.

“Brandon Peters, a Michigan transfer, gives Lovie Smith a quarterback who can make plays against the majority of the Big Ten. The Buckeyes’ defense is usually a unique test, but it showed some massive flaws in the first half of the season.

“On the other side, Justin Fields and the high-powered Ohio State offense will continue its torrid pace through Big Ten play. The Illini do not have the athletes to hang with Chris Olave and Garrett Wilson in the passing game, but I think how much the Buckeyes win by will be largely determined by how successful the running game can be with Master Teague leading the way.

AL: “Assuming Ohio State isn’t missing any key players, the Buckeyes should cruise to a relatively easy win on Saturday. The offense has too many weapons, while the defense can’t really play any worse than it has been in the second half of recent games.

“It’s not ideal, but such a situation might actually force Ohio State to shake some things up defensively. And because of that, I think you’ll see a very focused team on Saturday afternoon. Flying in the morning of and out right after the game only adds to the feeling of a business trip.

“The game isn’t really about Illinois, and the Illini don’t have enough on offense to make things interesting. But that said, I am impressed with the culture Lovie Smith has created in Champaign. He just doesn’t have the horses to keep up with the Buckeyes.”

PM: “In the last week, I think we’ve learned that Ohio State can be damaged by elite individual talents, specifically in the passing game. Indiana’s Michael Penix and Ty Fryfogle gashed the Buckeye secondary last weekend.

“Additionally, we learned that Ohio State has some issue with heavy pressure looks from opposing defenses, especially with blitzes right up the middle.

“Illinois has very little in the way of players that can seriously threaten Ohio State and even fewer reliable pass rushers. That doesn’t bode well at all for the Fighting Illini. Quarterback Brandon Peters appears to be competent as a signal caller but he’s nowhere near Penix and linebacker Jake Hansen is a star, but he doesn’t do much pass rushing.

“That leaves Lovie Smith’s squad in a tough spot. Illinois appears to be improved in recent weeks, but it isn’t improved in ways that seriously threaten the Buckeyes. I don’t expect this to be as significant a blowout as I did a few weeks ago, but I still don’t see anything worth worrying about here for OSU, even without head coach Ryan Day patrolling the sidelines.”