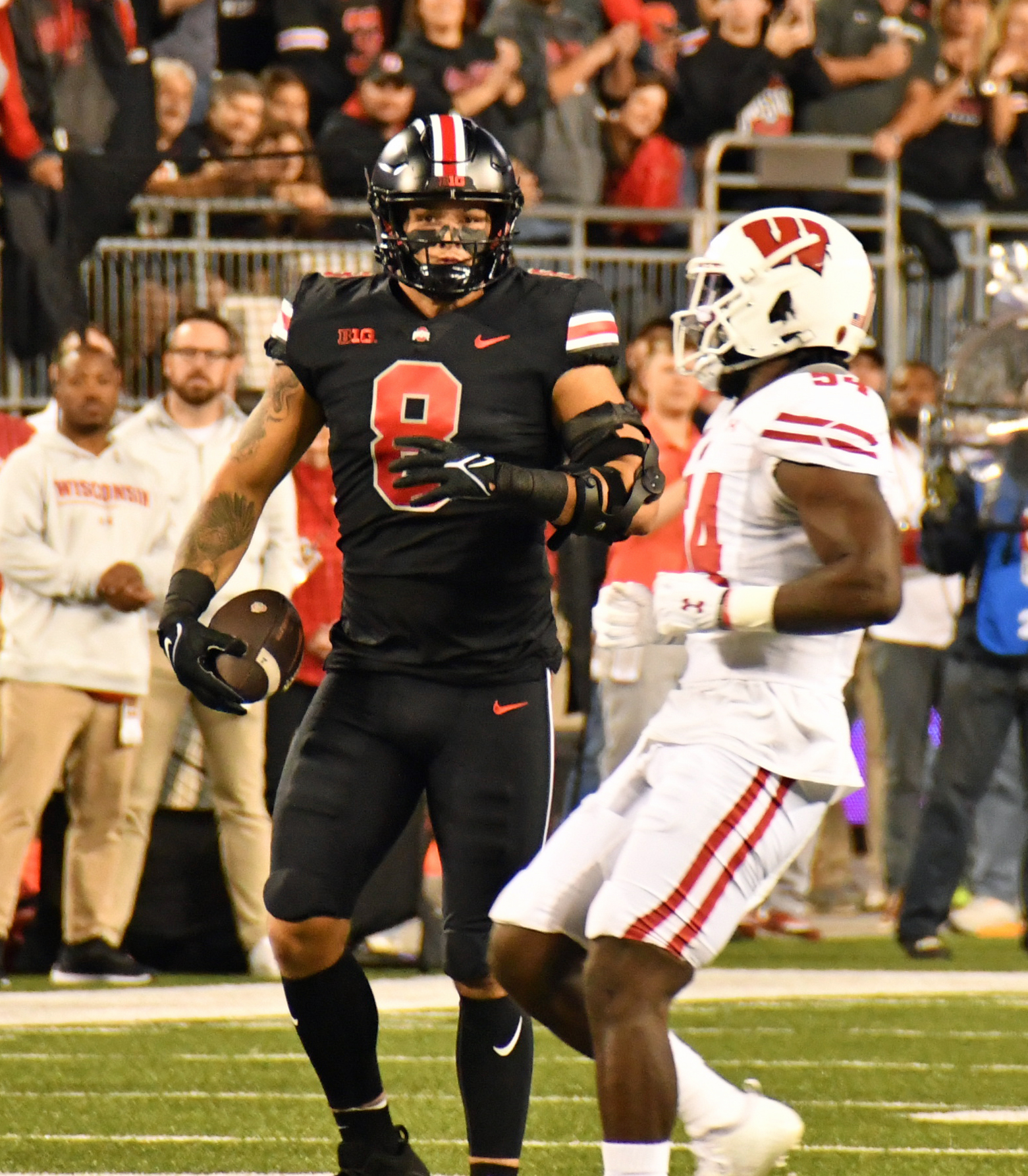 Andy Anders, BSB: On a night when Ohio State was forced to start its fourth and fifth cornerbacks on the depth chart, safety play became essential. And none had a larger impact from that position than graduate Tanner McCalister.

Wisconsin junior quarterback Graham Mertz threw his first pass of the night well behind his intended target, and McCalister capitalized on the mistake with his second career interception, first in a Buckeye uniform. It not only took the Badgers off the field on their first possession, it set Ohio State’s offense up for a 13-yard touchdown the next play.

On fourth-and-2 for Wisconsin with five seconds remaining in the first half, Mertz lofted a ball up the right sideline that looked like a surefire deep completion to second-year receiver Skyler Bell. McCalister raced over from his deep zone and separated Bell from the ball at the last second, forcing an incompletion and turnover on downs.

Jack Emerson, BSB: Sparked by his first two career touchdowns, tight end Cade Stover is my recipient of a Buckeye Leaf this week. Stover was, once again, utilized as a dynamic receiving threat for the Buckeyes in Ohio State’s blowout win over Wisconsin.

Dubbed “Little Gronk” by quarterback C.J. Stroud, Stover looked every bit the part of his lofty comparison — finishing with four receptions and 51 yards. Not only was Stover a dynamic threat in the passing game, he also showcased his trademark toughness by overcoming a pair of devastating hits. Although Stover was battered, he went the distance with the rest of the first offense.

Braden Moles, BSB: Thrown into the game as first-time starters, it was a solid outing for the cornerback duo of Jyaire Brown and JK Johnson. Alas, I can give out just one Buckeye Leaf, and I’ll give it to Brown for having this type of performance as a true freshman.

He was solid in coverage, finishing with a tackle and a pass breakup, and helped Ohio State’s passing defense limit Wisconsin to just 104 passing yards on the night. It’s no easy task filling in for either Cameron Brown or Denzel Burke, who were both out against the Badgers, and have been consistent players for Ohio State’s defense.

Even with all that in mind, Jyaire Brown – along with Johnson – answered the call for Ohio State, and if Cameron Brown and Burke – as well as cornerback Jordan Hancock, the No. 3 corner on the roster – continue to miss time, the Buckeyes know they have a reliable option in Jyiare Brown.