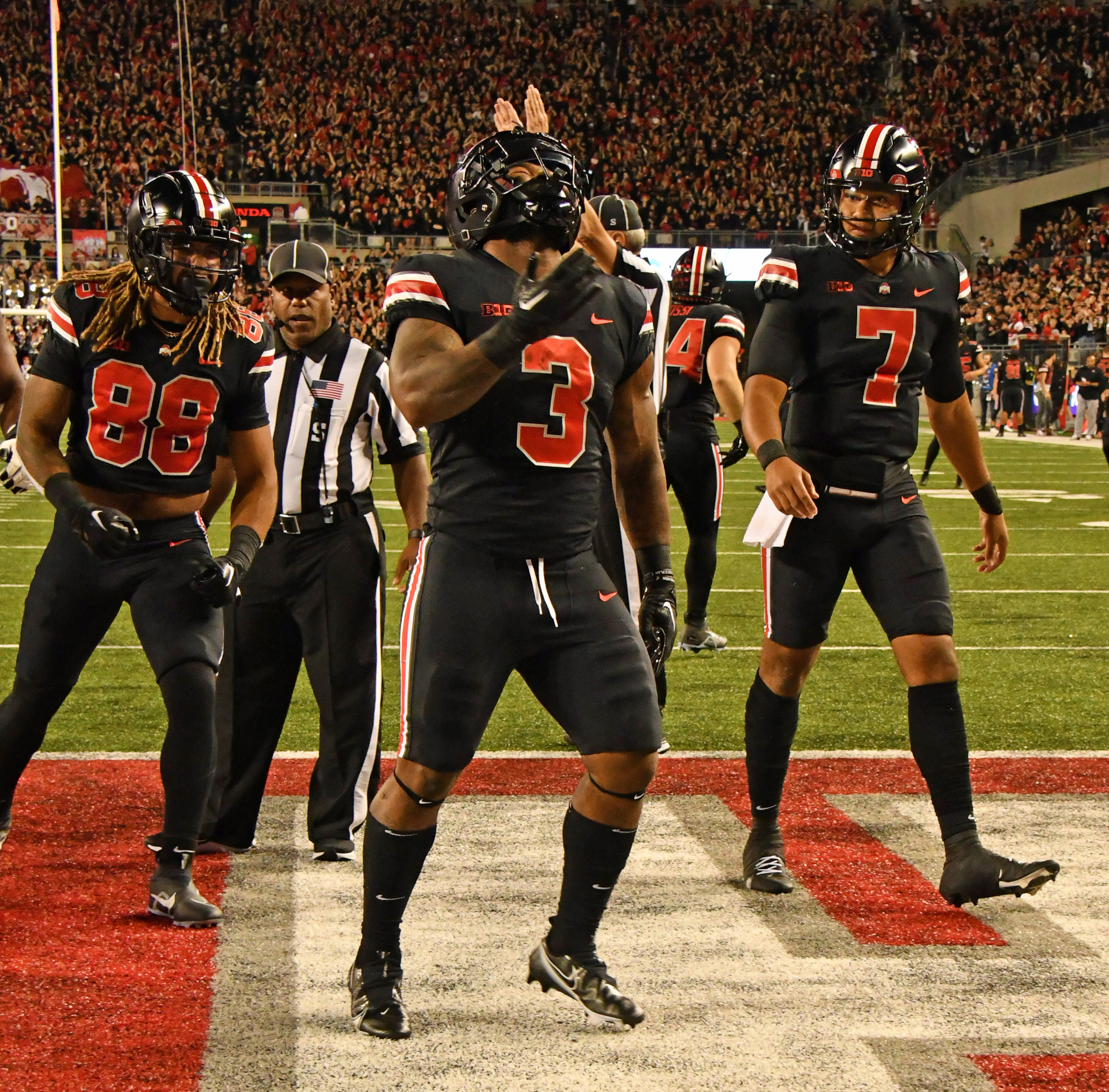 C.J. Stroud threw for five touchdowns, two apiece tight end Cade Stover and Emeka Egbuka, and No. 3 Ohio State used a big first quarter to dominate Wisconsin 52-21 in Ohio Stadium on Saturday in the Big Ten opener for each.

The Buckeyes (4-0, 1-0) got four touchdowns and a field goal in their first five possession to take a 31-7 halftime lead. They led 21-0 barely 11 minutes into the game on a 2-yard run by Miyan Williams and the first two career TDs for Stover, a converted linebacker.

Stroud was 17 for 27 for 281 yards and an interception. Egbuka made six catches for 118 yards and Stover’s four receptions gained 51 yards.

The Buckeyes got 121 rushing yards on 21 carries from TreVeyon Henderson and another 101 and two scores by Williams on 11 rushes before a crowd of 105,473 on hand for the third home night game of the season

Wisconsin (2-2, 0-1) quarterback Graham Mertz passed for 94 yards, completing 11 of 20 with a TD, and an interception while Braelon Allen ran for 165 yards, including one of 75 yards to make it 52-21 halfway through the fourth quarter.

The Buckeyes rectified an ominous start to drive 88 yards in six plays, using 2:41 to take a 7-0 lead on Williams’ 2-yard run up the gut.

Chip Trayanum mishandled the opening kickoff and was able to gain 5 yards before being tackled at the 12. Henderson ran for 3 before Marvin Harrison Jr. broke free for an 18-yard catch. Stover followed with a 22-yard grab to the Wisconsin 45.

Henderson rushed for 10 and Egbuka moved the ball to the 2 with a 33-yard reception to set up Williams on the next play.

The defense stepped up on the Badgers’ first possession when Oklahoma State transfer Tanner McAlister intercepted Mertz at the Wisconsin 46 and made a return of 30 yards.

Henderson ran for 3 and with the next snap, Stroud rolled left and threw back to an open Stover who powered his way into the end zone to extend the lead to 14-0 at 8:54 for his first career TD.

The Buckeyes chunked their way to another score to pad the margin to 21-0 at the 3:55 mark with Stover once again the recipient of a pass from Stroud. This time he was open for a 2-yarder because Stroud faked a handoff and bootlegged right.

The Buckeyes had 210 total yards to 23 for the Badgers in the first quarter while accumulating 12 first downs.

Williams capped a hard-driving series with a 3-yard rush to make it 28-0 at 13:33 of the second quarter. The Buckeyes marched 67 yards on eight plays. The key one was a third-and-4 from the OSU 39 when Harrison had a 16-yard catch to the Wisconsin 45.

A defensive pass interference on cornerback Jyaire Brown put the ball on the Badgers 37. Mertz later ran for 11 and on 3rd-and-9 from the OSU 40 found Skyler Bell for 26 to the 14. From there, Allen gained 13 yards on two carries and Mertz took it in from there.

Ohio State decided to play keep-away when it got the ball back and held it for 6:11 and used 13 plays only to settle for a 25-yard field goal by Noah Ruggles with 2:20 left in the half to put the lead at 31-7.

The drive started well with a 25-yard gallop by Williams to the Wisconsin 45. Williams on fourth-and-1 ripped off 9 yards to the 27 and needing a yard on third down, fullback/tight end Mitch Rossi pushed his way for 3 yards to the 15 but the drive stalled at the 7.

Late in the first half, Stroud was intercepted at the OSU 48 by John Torchio. On third down, McAlister broke up a pass intended for Bell at the 4 to end the threat.

More Of The Same

After Wisconsin punted on its initial series of the third quarter, Stroud’s third TD pass went to Julian Fleming for 12 yards and a 38-7 lead at 9:35. During the eight-play, 72- yard, 3:38 drive, Egbuka snagged a pass for 18 yards but it was Fleming’s catch of 31 yards to the 17 on third-and-4 from the UW 48 that was the key. Henderson carried twice to the 12 before Stroud found Fleming at the 5 and he took several defenders with him across the line.

After an Egbuka 10-yard punt return, the Buckeyes needed four plays to go 38 yards for a 45-7 advantage that took 2:02. Henderson rushed for 7 and 4, Fleming made a 19-yard catch to the 8 and Egbuka finished it with a ball by Stroud that was drilled between two Wisconsin players with 2:22 left in the third quarter.

It took five plays to go 75 yards in 2:25 with a third-down pass interference moving the chains to the 32 on the play previous to the score.

Ohio State was without injured starting cornerbacks Cam Brown and Denzel Burke and receiver Jaxon Smith-Njigba but the Badgers were unable to take advantage. … Ohio State had 539 total yards (281 passing, 258 rushing). … The Badgers have lost nine straight in the series and their last win in Columbus was 24-13 in 2004.