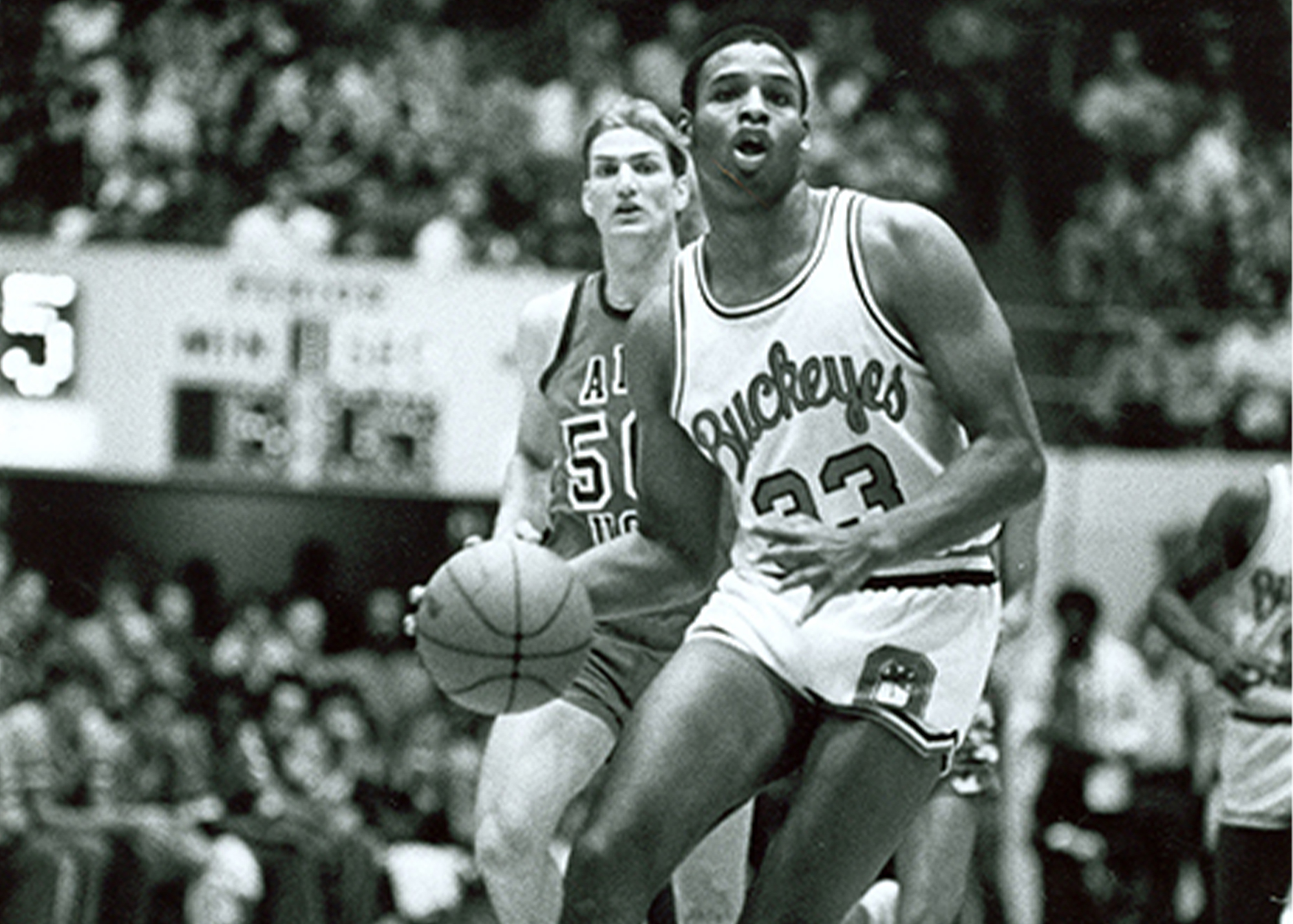 Don’t tell Clark Kellogg to sit on the sidelines. A former All-American, Big Ten Most Valuable Player and a top draft choice of the Indiana Pacers, Kellogg had a stellar basketball career that spanned several years.

Kellogg broke records at St. Joseph’s High School in Cleveland – many that still stand today – and paced the Ohio State basketball program for three years. He seemed destined for much of the same in the NBA, but his body didn’t allow him to pursue that dream further than three full seasons as he suffered several knee injuries.

Still, the discouragement from an abrupt end to his career didn’t keep Kellogg out of the game. He only moved forward. Kellogg dived into a broadcasting career that has lasted over three decades, covering college basketball at the highest level for CBS as a color commentator and studio analyst.

Buckeye Sports Bulletin staff writer Chase Brown spoke with Kellogg for the annual interview issue and in a three-page Q&A, Kellogg discussed his upbringing in Ohio, his time at Ohio State and in the NBA, and his career as a broadcaster for CBS.

Here is a sampling of questions Brown asked Kellogg about his extensive career:

BSB: In your freshman season at OSU, the team went 21-8 and qualified for the NCAA Tournament as the No. 4 seed. You defeated No. 5-seeded Arizona State in the first game before falling to UCLA by four points in the West Regional semifinal. What can you tell me about that season?

Kellogg: “That was one of the best teams in Ohio State’s history from a talent standpoint. I would stand that team against any of the other outstanding teams in the history of the program. That was a talented team. We came up short in our quest for a Big Ten championship, and our season ended without a deep run in the tournament. We fell short of our goals. It’s still disappointing that the 1979-80 team didn’t hang a championship banner.

“I was with Herb Williams recently, and we talked about that season and how it’s a bit of a void for us, individually and collectively. That was a special group during my freshman year. It was a bittersweet season. I loved the guys I played with, and it created great excitement around the program then. The conference was as good as any time in its history, regarding the number of outstanding players and teams.

“It was great to play at Ohio State in the Big Ten against the coaches and players that were part of that time. I just wish we fared better than we did. No regrets – just disappointment that we didn’t max out what we had on the roster and what we were on paper.”

BSB: With an NBA career in the 1980s, you competed against players many would consider some of the greatest to play the game – Larry Bird, Magic Johnson, Michael Jordan and others. Who is the best player you played against, and what made them special?

Kellogg: “There were so many different players at the time. Kareem Abdul-Jabbar was near the end of his career, and his game always stood out to me as someone with size. He stands out to me as one of the greatest of all time. Michael Jordan was just starting to emerge into his greatness. Charles Barkley was early in his career but still an extremely physical and challenging player to face. Marques Johnson was with Milwaukee during the prime of his career when those teams were tough. I think of Sidney Moncrief, Junior Bridgeman, all those old veteran players still in the league.

“I look back to that time and think of the Boston Celtics. I mean, those teams were loaded. Kevin McHale, Robert Parish, Cedric Maxwell, Dennis Johnson and, of course, Larry Bird – they were so good. That was a tough team to face all the time, and so were the Philadelphia 76ers. In my rookie year, they won the NBA title with Julius ‘Dr. J’ Erving, Moses Malone, Bobby Jones, Andrew Toney and Mo Cheeks. There were a lot of teams that could compete back then. The Eastern Conference was strong.”

BSB: From 1993 to now, you’ve worked with CBS Sports as a game analyst, color commentator and studio analyst, calling NCAA championships and partnering with well-known broadcasters such as Greg Gumble, Jim Nantz and others. Why have you stuck around with that network for the last 30 years?

Kellogg: “You always start with people. We have an excellent product at CBS covering the NCAA Tournament and college basketball. The people there are good for me. They have a lot of passion for what they do. I love being around the game – the players, coaches and colleagues. I love playing around with words and working with those people in different settings.

“I think the NCAA Tournament is one of the great sports events on the calendar. I think anybody that is a sports fan would put the event in their top five of the best sporting events to watch and take part in with the brackets and everything. It is a special privilege to have such a prominent role in bringing that to people.

“I don’t know how much longer I will go, but I’ve certainly enjoyed the ride, and I think there are still a few more stops left on the train.”

Brown’s full interview with Kellogg features 20 more questions that can be seen in the July print edition of Buckeye Sports Bulletin available to subscribers. Subscribe at this link to receive immediate online access, or call 614-486-2202 to subscribe and receive online access, and ask about receiving our July interview issue.