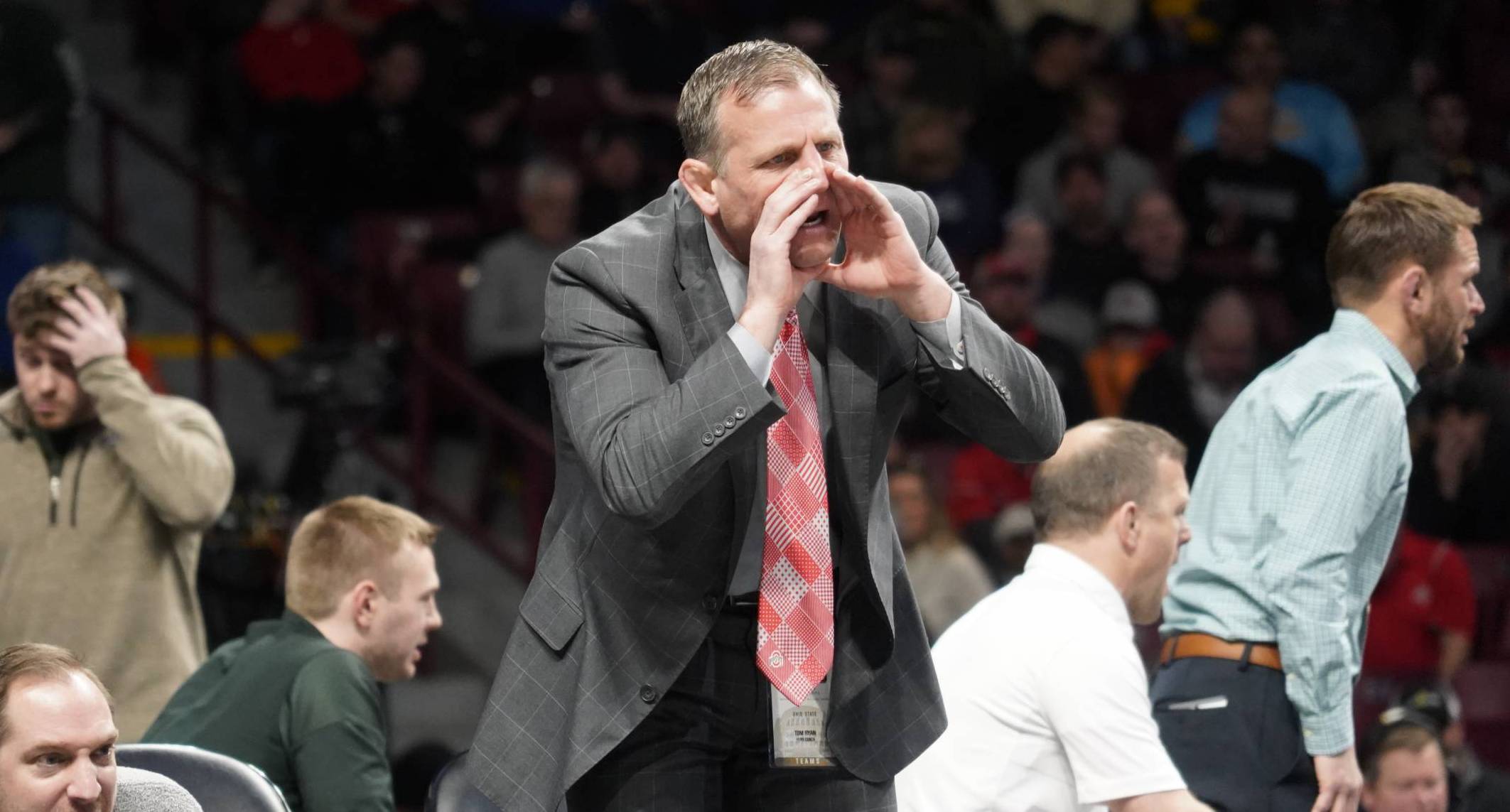 Tom Ryan’s Ohio State squad has its marching orders. Ahead of the 2022 Big Ten Wrestling Championships, scheduled for March 5-6 in Lincoln, Nebraska, the Big Ten has released seeding for all 10 weight classes. The Buckeyes tout a pair of No. 1 seeds, five that check-in within the top five, and nine in the top 10 of their respective class.

Leading the way for the Buckeyes are the same middleweights who have floated the OSU lineup all season. At 149 pounds, reigning Big Ten champion Sammy Sasso is the top seed.

Sasso took home a Big Ten championship last season after running the table in the conference tournament. He earned a first-round bye as the No. 1 seed after finishing the regular season undefeated. Sasso defeated Michigan State’s Peyton Omania and Michigan’s Kanen Storr before facing Nebraska’s No. 7-seeded Ridge Lovett in the final round. The Nazareth, Pa., native scored a late takedown in the first period before earning an escape and a reversal in the second to take a commanding 5-2 lead. Lovett held the riding-time point heading into the final frame, but Sasso battled back to ensure that the Nebraska wrestler wouldn’t walk away with any extra points.

Sasso became the first Buckeye to win a Big Ten title at 149 pounds since Lance Palmer in 2010. After the match, he told the Big Ten Network that he is proud to be a Buckeye and asked future recruits to join the Ohio State wrestling program so they can win a team championship together.

“I love this program and I love everybody in it,” he said. “I’m going to keep trying to do my best and start a new legacy here at Ohio State and start winning team titles, so I’m always trying to get young savages from high school to come be a part of what we got here. It’s something special at Ohio State.”

Sasso was 19-1 during the 2021-22 season with a 12-0 record in duals. He led all Ohio State wrestlers with seven wins against Intermat top-25 opponents and was third on the team behind Carson Kharchla (plus-83) and Ethan Smith (plus-67)with a plus-59 point differential over his 20 opponents. He earned the top seed in the 149-pound class of the conference.

When asked about Sasso’s mentality this season, Ryan said the fourth-year junior has displayed newfound contentment in his life that has led to positive results on the mat.

“Sammy has such a passion to win,” Ryan told BSB. “I think the most important thing that he’s doing this season compared to others is that he’s finding some sort of tranquility in his life. He was the best guy last year, and he proved that in the Big Ten. He should’ve won the national tournament, too.

“He’s learning to enjoy life. His life isn’t solely winning this tournament or the next one. He has said that a lot to the team (in the past), but I’m not sure he ever believed that. Now he is starting to believe that. He has every intent to win the postseason tournaments. If he doesn’t, he will be very disappointed, but he’s more than that. I think life’s been good for him.”

Wisconsin’s Austin Gomez, Lovett, Iowa’s Max Murin and Northwestern’s Yahya Thomas round out the top five. Sasso will await the winner of No. 8 Christian Kanzler (ILL) and No. 9 Graham Rooks (IU) for his first matchup.

Kharchla claims the other No. 1 seed, sitting atop the 165-pound division. He entered the starting lineup for the first time as a Buckeye after suffering a torn ACL before last season began. Ryan said he has been impressed with Kharchla’s ability to bounce back from his injury and perform at a high level.

“We’ll never know what would have happened last year, but I believe he would have won the nationals if he didn’t tear his ACL,” Ryan said. “He’s one of the best wrestlers that I’ve ever had in this program. He’s an amazing finisher. He lives a really good life. He loves wrestling, and he’s extremely talented. He’s got power, speed, skill. He’ll fight for a Big Ten title and a national championship this season.”

Iowa’s Alex Marinelli, the defending champion, is the No. 2 seed with UW’s Dean Hamiti, Michigan’s Cameron Amine and Michigan’s Caleb Fish behind him. Kharchla will draw the winner of No. 8 Clayton Wilson (NEB) and No. 9 Cael Carlson (Minn).

Kaleb Romero is the next highest Buckeye seed, checking in at No. 3 in the 184-pound division behind Penn State’s Aaron Brooks and Michigan’s Myles Amine. Brooks beat Nebraska’s Taylor Venz, this year’s No. 4 seed, for the title last season. He’ll square off with No. 14 Jack Jessen of Northwestern.

“He’s someone who we will count on to go out and win matches,” Ryan said. “He is the ultimate professional. He’s done a really good job, and he is incredibly committed. You never have to question his commitment.”

Malik Heinselman is No. 4 in the 125-pound region, right where he finished last season after an 8-2 loss to Michigan State’s RayVon Foley in the third-place match. Foley is gone, and last year’s champion, Iowa’s Spencer Lee, has missed the season with an injury. This year, it’s Michigan’s Nick Suriano atop the division, trailed by Drew Mildebrandt of Penn State and Wisconsin’s Eric Barnett, with Purdue’s Devin Schroder – who eliminated Heinselman in the semifinals last year – rounding out the top five. Heinselman’s first-round draw is Jeremiah Reno, the No. 13 seed representing the hometown Cornhuskers.

Lastly in the top five selections, Smith is the No. 5 seed at 174 pounds after finishing as the runner-up to Marinelli at 165 pounds last season. All four of last season’s semifinalists here return, and fill out the group ahead of Smith. Michael Kemerer of Iowa, the 2021 champion, is the No. 4 seed, trailing Nebraska’s Mikey Labriola, Michigan’s Logan Massa and top-seeded Carter Starocci of Penn State, the 2021 runner-up. Kemerer toppled Massa in last season’s semifinals, as did Starocci with Labriola. Starocci bounced Romero in the quarterfinals in 2021. Smith will take on No. 12 Nick South of Indiana.

“If these guys – Sasso, Kharchla, Smith, Romero – can perform at the Big Ten tournament, then we’ll be in a good position,” Ryan said. “Everyone will be in heaters to win the tournament. If we get them, we’ll all celebrate. If not, we’ll cry together and get back to work.”

Beyond that top group, Ohio State has some longer-shot contenders elsewhere. Dylan D’Emilio is the No. 7 seed at 141 pounds, just as he was last season when he bowed out in the quarterfinals to eventual champion Nick Lee of Penn State. Lee returns as the No. 1 seed, as does runner-up Jaydin Eierman of Iowa at No. 2. Sebastian Rivera of Rutgers is the No. 3 seed after a third-place finish last season, with Nebraska’s Chad Red and Minnesota’s Jakob Bergeland rounding out the top five. D’Emilio has Northwestern’s No. 10 Frankie Tel Shahar in the first round.

Tate Orndorff claimed the No. 8 seed in the heavyweight region after a surprise run to sixth place last season. Returning champ Gable Steveson of Minnesota is the top seed, with runner-up Mason Parris of Michigan in the No. 4 spot, sandwiching third-place finisher Tony Cassioppi of Iowa at No. 2 and fourth-place finisher Greg Kerkvliet of Penn State, who transferred from Ohio State in 2019, at No. 3. Orndorff will face Illinois’ Luke Luffman for the chance to wrestle Steveson, who beat Orndorff in last year’s quarterfinals with a 19-4 tech fall.

Bryce Hepner takes the No. 9 seed at 157 pounds, as does Gavin Hoffman at 197 pounds. In the former, both parts of the 2021 title bout return with champion Ryan Deakin of Northwestern in the top spot and Iowa’s Kaleb Young at No. 2, trailed by Michigan’s Will Lewan and Purdue’s Kendall Coleman, the fifth-place finisher in 2021, at No. 3 and 4. Peyton Robb, who finished fourth at 165 pounds last season, rounds out the top five despite the weight cut. Hepner will match up with No. 8 Robert Kanniard of Rutgers in the opening round.

The 2021 champion at 197 pounds, Michigan’s Amine, is out of the class because of a drop to 184 but the other three semifinalists return to fill out the top five, along with one of the league’s brightest new stars. Nebraska’s Eric Schultz is the top seed after finishing in second place last season, while third-place finisher Jacob Warner of Iowa takes the No. 4 seed behind the man he beat for that spot, Cameron Caffey of Michigan State. Max Dean of Penn State is the shiny new name, transferring in from Cornell and taking the No. 2 seed. Patrick Bucki of Michigan claims the No. 5 spot. Hoffman will battle Braxton Amos of Wisconsin in the opening round

Lastly, Dylan Koontz gets a tough draw at 133 pounds, grabbing the final seed at No. 14. Penn State’s Roman Bravo-Young and Iowa’s Austin DeSanto – last year’s finalist – draw the top two seeds in their finishing order from last year, trailed by third-place finisher Lucas Byrd of Illinois, who will face Koontz in the opening round. Foley is here as the No. 4 seed after his reclassification, while Michigan’s Lucas Byrd takes No. 5.

Ryan said before the seeds were announced that while he’s not overly optimistic on his team’s chances, he does expect full effort from everyone, and serious title contention from many of those higher seeds.

“I don’t know if we have a chance this year to win it, but we are gonna fight like animals when we try,” Ryan said. “This team is tough, but we need to be tougher if we are going to win this thing. There’s a new saying in the program: We want men who are tougher than woodpecker lips.”

The Nittany Lions have the most one seeds with four, while the Buckeyes are the only other program with more than one. Iowa leads all teams with nine top-five seeds (only missing out at 125, where it has the No. 6 seed), trailed by eight from Michigan, seven at Penn State, six at Nebraska and five from Ohio State. Indiana and Maryland are the only teams without a top-five seed.