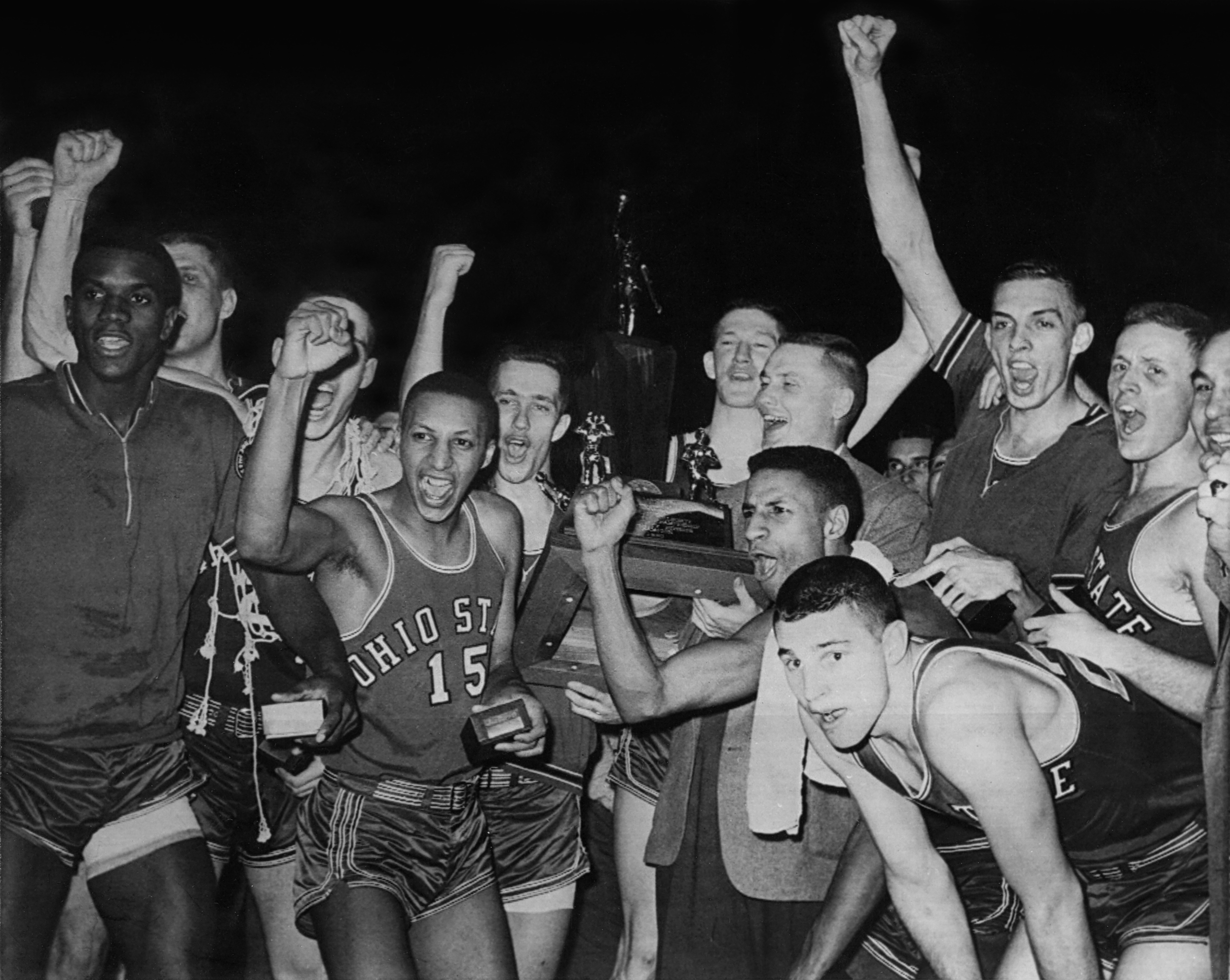 There is no other way around it – the 1959-60 Ohio State team was a dominant force. Not only did the squad lead the nation in both scoring and efficiency with 90.4 points per game and 49.7-percent shooting, but it held opponents to 69.8 points per contest and a 38.8-percent mark from the field.

The Buckeyes’ 20.6 average scoring margin showed their domination throughout a nearly flawless season. They lost two games in December by a combined eight points, falling at Utah, 97-92, and at Kentucky, 96-93. The only other loss came to Indiana, 99-83, on February 29, but Ohio State had already locked up the Big Ten title and No. 1 seed in the tournament.

One of the biggest reasons why the Buckeyes were so superior to their opponents was Big Ten Player of the Year Jerry Lucas, who averaged 26.3 points and 16.4 rebounds on an NCAA-leading 63.7 percent shooting during his sophomore season in 1959-60.

Lucas was one of Ohio State’s five double-digit scorers along with junior Larry Siegfried (13.3), sophomore Mel Nowell (13.1), sophomore John Havlicek (12.2) and senior captain Joe Roberts (11.0). Furry was the first man off the bench, averaging 5.1 points and 3.3 rebounds per game.

Siegfried, who was known as ‘Sig,’ and Furry sacrificed the most for the sake of the team once Lucas, Nowell and Havlicek became eligible as sophomores (freshman could not play at that time). Siegfried had led the Buckeyes with 19.6 points per game as a sophomore in 1958-59, while Furry averaged 11.5 points and a team-leading 10.7 boards as a junior.

Sig, Furry and the rest of the team embraced the selfless culture promoted by Hall of Fame coach Fred Taylor, and those sacrifices helped separate the 1960 team from its competition.

“That was a great asset for this group. We were friends; we were close,” Lucas said at the team’s 60th reunion on March 5, 2020. “We played the game the way it should be played – there was no selfishness on our team.”

When it came time for the 1960 NCAA Tournament, the Scarlet and Gray were operating like a well-oiled machine. The Buckeyes’ cohesion manifested itself on the court as they stomped every team in their path, outscoring opponents by 19.5 points on average, including a brilliant performance in the championship game.

Though the Golden Bears were favored, the Buckeyes controlled the championship game from the jump, building a 37-19 halftime lead. They continued their efficient play and shot 67.4 percent (31 of 46) on the game to win 75-55 at the Cow Palace in San Francisco.

The 20-point margin of victory represented the largest in the then-22-year history of the NCAA Tournament, and stood until Lew Alcindor’s UCLA team won by 23 against UNC in the 1968 NCAA title.

“When we won that national championship … I wasn’t even able to feel it until that clock made its last tick. I felt for the first time in my life, and the only time athletically, what elation felt like,” Nowell said. “I saw myself run around and do things that looked like a little kid. Like a little 3-year-old running around, jumping, and having a great time.

“What I experienced is something that I had never experienced prior to or again athletically, and I had a lot of success athletically even after that. That has lasted in terms of what I feel about what we accomplished. It was simply the best that you can feel.”

The 1960 team had a national title to its name, but since its four leading scorers returned in ‘61, could it be possible the subsequent squads were better?

“It certainly is possible, and in some ways, they might have been better at different stages. However, it’s important to look at what they lost from the ’60 team,” Caryer told Buckeye Sports Bulletin. “No. 1 was senior co-captain Joe Roberts, a very versatile forward. He could score, he could defend, he could certainly rebound – real, real good player. And like all the other four seniors besides himself, he was an excellent leader. Dick Furry is one of the most unappreciated players in Ohio State history – he had started with Roberts at forward the year before on a very good team. And Furry did something that very few people in  Ohio State history have done – he got more than 20 rebounds in a game, and he did it twice.”

Furry, who is not one to toot his own horn, referred to the supreme basketball intelligence of Hall of Fame coach Bob Knight, who was a part of the dynamic sophomore class on the ’60 team.

“One of the reasons was that we got along so well together and never had any serious differences,” Furry told BSB. “I used to go on golf trips with Bobby Knight, and one day I said, ‘Bob, which of the three teams that you played on do you think was the best?’ And he said, ‘Clearly, the ’60 team.’ I said, ‘OK, you tell me why you think so,’ figuring he probably has an analysis better than me.

“‘First of all, if you looked at it by position, Lucas was there all three years. So that position had the same person the whole time, and he got better but not enough to compensate for other things. The forwards on the ’60 team – they had Havlicek, Roberts and (Furry). And the next year they had Havlicek, Knight and Richie Hoyt. That clearly was an enormous drop off. And then the next year, Hoyt was gone, and they had Havlicek, (Knight) and Doug McDonald.

“‘At the guard position, in ’60, they had Sig and Mel. They also had Sig and Mel in ’61. And in ’62, Sig had graduated, and they had Richard Reasbeck and Gary Gearhart, who weren’t the same color of a ball player that Sig was.’ And I had never thought of it that way.”

So, why was the 1960 team the only one to get over the hump of becoming national champions?

“Joe and I always kidded that the reason they couldn’t win the next two years was that we graduated,” Furry said with a laugh.